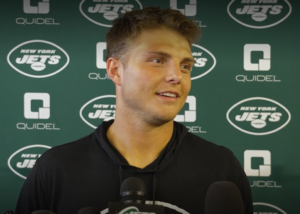 Neil Best, Newsday: What was it like for you hearing the news, officially, that you’re cleared and good to go?

It’s exciting. I’m just excited to be back playing ball. It flew by. So, excited to get back on the field.

Neil Best, Newsday: Where are you physically and mentally? Obviously, you’ve been cleared by the doctors, but what about you?

Yeah, I’m 100 percent. I’m ready to go. Of course, the biggest thing is that you haven’t been playing ball in a little bit. You’ve been trying to replicate it as much as possible. Just going to have fun with this process and getting back in and just giving it my best.

Antwan Staley, New York Daily News: How difficult was it for you to kind of just go through this process, especially after suffering an injury a year ago?

It’s frustrating, but I think everyone kind of deals with injury. It’s how you handle it, how you get back, and how you can prepare yourself to come back and still play well with missing some time.

Al Iannazzone, Newsday: What was practice like for you? How did you feel going through everything like everything was the first time in a long time?

It was exciting to get back on the field and playing and calling plays and being in the huddle with the guys. I got to do better, make some throws, whatever it is. I’m confident, I’m just going to keep learning and getting back into the groove.

Neil Best, Newsday: Did you have to tell yourself not to do too much, not to take it all on yourself this first time out?

No, that’s thinking too much. In my mind right now, it’s, ‘I’m going to give this everything I have. I’m going to have fun with it.’ Let the result take care of itself. If I go out there and I play my game, I do what I’m supposed, I have that short term memory after plays and move on, I think things are going to go well.

Connor Hughes, SNY: Will you have anything on your leg out there? Is that the plan? No sleeve, no brace? And why do you feel confident not having anything on?

The sleeve was kind of just a compression just to keep it tight. It didn’t really do a ton, anyways. I feel like a brace would kind of inhibit me more in my ability to move around and get myself out of trouble which is why I feel comfortable not having anything there.

Rich Cimini, ESPN.com: When you’re off that period of time, and you could probably draw on last year’s experience, what is the hardest thing to come back? Is it timing? Is it your endurance and conditioning throughout the course of a game? What usually is the biggest concern when you’re off that long?

For me, I would say the reps with the guys. I feel like mentally, I’ve been able to learn from every single thing that Joe (Flacco) has gone through since I’ve been out. I feel like I understand the learning points there, but I wasn’t physically going through those. So, now, it’s about how I can apply those without having those reps. Throwing with the guys, I haven’t had a lot of time throwing with a moving target. So, that’s what a lot of this week is getting in. You just got to be able to make it happen. You got to figure it out.

Rich Cimini, ESPN.com: There’s been a lot of movement on the offensive line, especially at left tackle with George (Fant) being out. Does that concern you at all as a quarterback? You’re coming back from a pretty serious injury, and there’s been some issues up front. How do you reconcile that?

I’m not concerned at all. We got some great players up front. Those guys are going to do their best. It’s just one more opportunity for someone to keep stepping up. Whatever positions guys are at, I’m excited for this next week and I’m hoping I can help those guys — getting the ball out of my hands and doing whatever is necessary.

Zack Rosenblatt, The Athletic: How do you go about, a lot of new guys — Garrett (Wilson) was saying that you guys have had your most reps you have played together the whole time. How do you go about speeding up that process of timing and all that stuff you need to have with your receiver like that?

You just got to take them in practice, take some after practice, work some little things. You just need to be able to make it happen. This is the NFL. The expectation is to make things work with little reps and little looks at things. It’s part of the deal. I did it last year with my injury.

Zack Rosenblatt, The Athletic: How excited are you to get going with Garrett, especially seeing what he’s been able to do as a rookie already?

Super excited. Not just Garrett, but everybody. I’m just psyched to be back on the field, going through the process. It’s the happiest I’ve been in months.

Rich Cimini, ESPN.com: Have you been pointing towards this week? I mean I’m sure this just didn’t pop up in the last 48 hours that you’re playing this week. Like was this always the goal this week?

I wouldn’t say it was always the goal. I was taking it kind of day-by-day, but the last couple of weeks, I’ve felt really good, so you start to give yourself a little bit of a timeline, or whatever it is, and this past week I started feeling good, so that was kind of the thought process.

Yeah, you know it’s kind of similar to the entire division we’ve played a little bit, a little bit of everything. Some great playmakers, they like to get to the ball as well, and they’re going to try and do some different things to confuse us, but I’m excited for the challenge.

Yeah, I’m sure a little bit of every emotion, staying calm. I’m going to be super excited. I just got to go out there and play ball, so I’m excited to get on the field.

Steve Serby, New York Post: Is it as fun for you to watch Garrett Wilson as it is for us?

It is when I’m throwing it to him, but hopefully I can get back there and get him some catches.

Yeah, he’s a freak athlete. I mean that’s what makes him special, and I think that’s not just him. We got a lot of guys that are like that. He’s a freak, he’s hard to stay in front of, he’s hard to throw the ball to sometimes because he’s faking me out. So, it’s getting that chemistry, watching those guys, and we’ve learned a lot about Garrett (Wilson) in the past weeks of having him on our team, so we’re starting to get comfortable with the way that he’s going to do things, and you can definitely trust he’s going to get it done.

Rich Cimini, ESPN.com: Do you approach things differently in terms of, because of your knee on Sunday, will you think about it? Will you caution yourself not to do certain movements or not to try and scramble out of the pocket. How do you approach it?

No, I’m full go. I’m going to be playing ball how I can. If somebody comes up, make somebody miss, get out on the edge, extend plays when I need to, hang in the pocket. I’m planning on being exactly how I should be.

Al Iannazzone, Newsday: How do you replicate that out there? Can you do that during practice?

I mean, yeah, a little bit in practice. Pocket breaks down, there was a couple of times today, you try and simulate it. I had the strength coach chasing me around last week, stuff like that.

Andy Vasquez, NJ.com: You know what it’s like to come back from an injury and missing some time. How much does that help prepare you mentally with what you’re about to go through on Sunday?

Right, Like I said, I have the ability to watch a lot of cool reps over the last couple of weeks, and now it’s how do I apply that without having those reps.

Andy Vasquez, NJ.com: I meant more on just from maybe the emotions you’ll feel when you talk about being the happiest you’ve been in months. Just kind of how are you going to manage that when you get out there?

Right, I mean once you get out there, it’s like being a quarterback your entire life, you have to be calm in certain situations. I’m sure there’s going to be times where I got to be able to bring myself back down, but it’s just back to playing ball.

Al Iannazzone, Newsday: Did seeing Joe Flacco and how he responded especially in Cleveland, is that good for you in learning how to always be like that?

Yeah, no matter what, just showing the game is never over until it’s over, so always keep fighting until the end, and then just never quitting and giving it all you got.