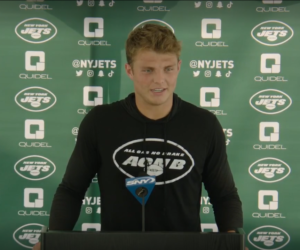 Brian Costello, New York Post: How did you feel out there on day one?

It was good to get back on the field. You always get those nerves. I think everybody feels that, too. Even (Joe) Flacco, however long he’s played. Everyone just kind of feels that. You feel anxious to just get out there on the field. It’s definitely fun to be back though.

Brian Costello, New York Post: How would you describe the Idaho trip and how you put that together and what you got out of it?

Really it was us trying to find — last year we did Miami. A lot of guys are from that area, been there, trained there. So, I was trying to find something that they’ve never done before. We found a spot, a little ranch, (Gazza) Ranch in Northern Idaho. We flew. A lot of the guys were like, ‘We’re going to Canada. Where are we going?’ But, they had quite the trip out there. We had an awesome spot. It was great for us. We went golfing one day, boating the next day, taught those guys how to wake surf a little bit. They set up a perfect field for us, painted some NFL lines for us. We got to work on a lot of stuff. More than anything it was like I said back when we were leaving OTAs, it was a good bonding moment for all of us to sit by the fire at night and talk. It was a really cool trip. We definitely had a blast together.

Dennis Waszak, Associated Press: Was (Wayne) Gretzky out there, or did you invite him? How did that happen?

Gretzky has a house there. So, we were able to hang out with him and spend time with him. My marketing agent represents Gretzky as well, so we had that connection there. He invited us to his place and had some sweet water slides and we all got to hang out in his back yard.

Connor Hughes: Were you thankful for the lack of cell service while you were out there?

Brian Costello, New York Post: How have you handled these last few weeks with the social media stuff that you’ve had to deal with?

Brian Costello, New York Post: Is it tough, though, you can focus on football, it affects your family, it affects people around you. Is it tough dealing with the ancillary stuff that comes with it?

Otis Livingston, WCBS: How excited are you to have the group of weapons that you have at your disposal this season?

Yeah, extremely excited. You can see these guys on day one jumping off the page. I’m excited that we got to spend some time together in Idaho because you really got to see it there, too. We had a good amount of time bonding together as well. My job is I have to get the ball in their hands. Those guys are extremely talented, so I’m excited about that.

Rich Cimini, ESPN: What are your personal expectations for this season and what area do you think you might make the most growth?

Really, it’s just focusing one play at a time. I think it goes back to what pretty much everybody says in, ‘How can I keep improving?’ Today was Day One and there are still things that I can go back and improve on that I have to do better. So, how can I keep improving? And not stressing so much about the season coming up and the expectations and all that. It’s how can I keep improving day by day and trusting in the guys around me, get them the football, be consistent, throw good balls, be smart, all the things a quarterback needs to do. And I think that’ll take care of itself.

Connor Hughes: Do you feel a substantial change from this first training camp practice to the one you had last year?

I think, really, it’s just you’re relaxed, you have a better understanding of your job. Even when you make a mistake, it’s I can correct myself now for the most part after. That’s a good thing because you feel like you can keep improving and getting better, but I feel like just understanding what I’m asked to do in this offense. My ability to make quick decisions and get through my reads is going to keep improving.

Rich Cimini, ESPN.com: What part of Idaho was it?

It was northern Idaho. We were up in Coeur d’Alene.

Rich Cimini, ESPN: What did you come in weight wise as compared to last year?

Dan Leberfeld, Jets Confidential: What can you do to improve your completion percentage? I think it was 55.6 last year. Obviously, you want to do better. Is it improving mechanics? Is it improving progressions? What is it?

I think it’s an understanding of the offense. Idon’t think it’s something mechanically that needs to be changed. I feel like I’ve always been able to throw the ball. When you understand where to go with the ball and you have that confidence and understanding within the offense, you’re able to be accurate because you’re confident where you’re going with the ball. I think that’s one thing, and also finding completions. Just telling yourself on every single play, yes, make the best decision but find a completion too. Maybe sometimes you might miss the one down the field, but as long as you’re finding a completion you’re doing the right thing.

Connor Hughes: When you talk about maintaining that weight, is that something where you need to stick to a strict diet to ensure that you’re keeping that weight up so you don’t get back down to 206, 207?

Yeah, so kind of like I did in OTAs and part of this summer, too, is I have a written plan of meals and times I need to be eating certain things, tracking weight, and doing all of that different stuff with our team, and really making sure I stay on top of it.

I mean, really, it’s been a crazy year. It really flies by. But, I think what I was saying earlier of the understanding within the offense and what my job is, kind of the mindset you should have. The repetition of plays. I’ve repped a lot of these plays a lot now, so you understand what they should look like. Last year, I think a lot of plays we were running was my first time ever seeing that against an NFL defense and the NFL pass rush. I think the game starts to slows down for you and you’re able to process a little smoother and a little more efficiently.

Andy Vasquez, NJ Advanced Media: You talked about how you were more comfortable on the field, but just in terms of leadership, your teammates have obviously shown a lot of support for you recently. How do you feel different than a year ago as a leader? Are you more comfortable in that role moving into this year?

I don’t even know if I think of it as I really have to take that leadership role. It’s like I need to have that personal connection with guys, and I think that takes place. They start to look up to you and ask you questions and try to lean on each other. It’s like we are there for each other, that’s really what you have to show. That’s really what the Idaho trip was for. It was for us to spend time together, show them I care about them, and I want to know and get to know them and the little details about their life. And then they can trust me on the field and I’m going to try to do everything I can to get them the ball. I think it all leans on each other there.

I really think it is because I know these guys better now. It’s hard walking into the locker and start yelling to guys and I’m not doing that. I think coaches yell enough, so players need to be there to encourage each other and bring them up. So, it’s easier when you really get to know them, you can start to say some stuff to them. Really, I just hope I just lift them up when guys are down.

Al Ianazzone, Newsday: Did you guys do any s’mores?

Yeah, we did. Garrett’s the one who cracked them out. Not good for me.

It’s not true at all. It’s not true at all. Of course not. That’s why there are 22 guys that play — there’s 11 on offense and 11 on defense. There’s coaches that all have a hand. There’s a game plan. Of course, could you say if I don’t do my job the offense isn’t going to run? Of course. I touch the ball every play. I hav to do my 1/11th of my job and everything else takes care of itself. That’s what I have to focus on: What’s my job on this play? And I how can I make sure to get that done.

Brian Costello, New York Post: How many guys were in Idaho?

I think we had three tight ends there, four or five receivers there, three quarterbacks there. Good amount of guys. Solid number.

Connor Hughes: Will you look to expand that next year?

That’s at the bottom of the list, but if we have enough spots, I’ll let you guys know.