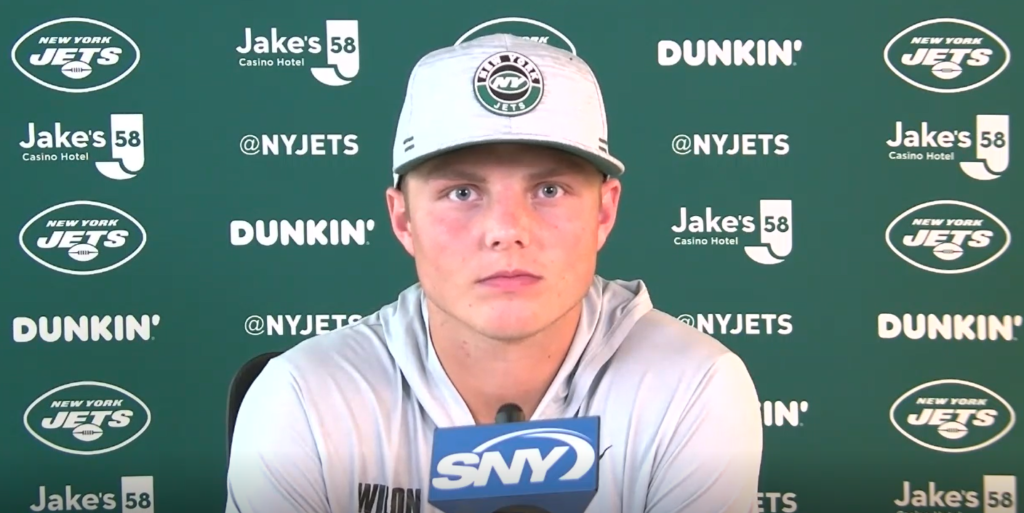 Darryl Slater, NJ Advance Media: Zach, how would you assess how you did this spring?

It’s hard to say exactly how you did. Personally, in my eyes, I feel I can improve every single day, I feel like I’m learning something every single day. Even on the good days, it’s still frustrating, and it’s just because it’s like a foreign language, every single day it’s the same plays but you’re getting different reps, different looks at it, different defensive coverages, whatever it is. One of our running backs said to me after practice today, ‘it’s hard to know sometimes if it was a good or a bad day.’ It’s really just because there’s so many learning experiences, things that are good to learn from.

(follow up) Was that Michael Carter who said that to you, fellow rookie?

Darryl Slater, NJ Advance Media: Zach, do you have any plans to get together with any of receivers or running backs during the next six weeks before camp?

Yeah, absolutely. I think that’s critical in understanding how an offense flows together. Not only are we out here looking at different coverages and trying to get our footwork and routes, timing, progression, all that stuff, locked up, but now you got to make the throw. These are all guys that we haven’t had a lot of experience throwing to. I think that’s needed to be able to talk through routes, what they’re thinking, what things they’re going to do against certain coverages, where they’re going to snap things off at. You get a feel for how they are as a route runner, so I think that’s pretty critical and we’ll make sure we find some time to get together.

DJ Bien-Aime, New York Daily News: Zach, you’ve built a quick rapport with Elijah Moore. What are some things that you’ve seen from him so far that have led you to keep feeding him?

When the guy’s not thinking, he is a great player. He’s got so much potential. That’s like with everyone right now, we’re all thinking, but every once in a while you catch those glimpses of, you throw a ball at his knees or above his head and he catches it so well, and is able to transition up the field. It’s so natural for him, his ability to catch the ball and get up the field. Very smooth player, and he wants to be great. I spend a lot of time with him, he’s someone I want to be around because he wants to be great. He’s definitely a motivating person, we’re going to have a good time doing this thing together because he’s going to be a good player.

Al Iannazzone, Newday: Zach, is there any area you think you’ve improved the most in over these last few weeks that you can say ‘I’ve seen development there?’

Yeah, I’d say just timing, the NFL game, understanding what holes you can throw things into, how quickly guys can break on things. Just the timing with your footwork, and I think that comes with understanding the offense. I look back in college, you’re running the same offense for three years, so you know it like the back of your hand. Out here, you’re always just a step slow at first. It’s just how fast can I get through my progressions to where I don’t even have to think about it, if something’s covered I instantly know how to move on. I think that’s the key, that’s what I’ve gotten better with, and same with the other quarterbacks as well.

Alex Vejar, Salt Lake City Tribune: Zach, just had a couple questions about your high school years at Corner Canyon. I’m curious, when you were there, what did you feel stood out about the athletic program?

At Corner Canyon I would say it all stemmed from the Head Coach. We still have a great relationship me and Coach (Eric) Kjar. Just the way he pushes those guys to work hard in the offseason. They had 6 A.M. lifting everyday, he’s making sure everyone’s running track, they get after it. He calls a great offense as well, it’s a very explosive offense that takes shots down the field.

(follow up) With going to BYU after graduation, you said you had a good relationship with Coach Kjar, you’re watching from afar, they won those three state championships. Where do you think they rank in terms of maybe other programs in Utah, are they a dynasty now or do they have a couple years to call themselves that?

Rich Cimini, ESPN: Zach, all the coaches say you’re just obsessive when it comes to watching film and that sort of stuff. Can you take us into that mindset of yours and also what will you do now that it’s over? Are you going to take stuff home with you on your iPad and just do it at home? And also, do you worry about watching too much, do you need to get away from it a little bit during the down time?

I’ve always looked at film like my time away from football, honestly. I feel like that’s when you can rest your legs a little bit and hang out. I’m not saying I work extremely hard, there’s always someone working harder than you. I don’t love feeling unprepared, I don’t love feeling like I’m not ready for something. I love the, always having something new feeling every day in practice. You don’t know what defense they’re going to throw at you and there’s always something new to prepare for and get better at. I’m just going to make sure I’m doing everything I can to be ready once training camp comes around.

This is actually just a personal question.

(follow up) I’m only asking because the stuff came out, did you see that? There’s pretty strict rules of what the vaccinated guys or what the unvaccinated guys can’t do. If you saw that, what was your reaction?

That’s just a personal thing with everyone on the team. No matter what people decide to do we’re going to make it work, whichever way.

Dan Leberfeld, Jets Confidential: Hey Zach, with Braxton Berrios, you guys seem to have a lot of chemistry out there. What do you attribute that to?

Braxton is a smart guy, that’s one of his best attributes. He’s a slippery player, he gets in there and runs some great routes. He’s quick, but I think the best attribute is just knowing what’s going on. He’s got a great feel for the defense, he’s got great hands. He’s just been in those spots to make plays. We’ve got a lot of good play makers and Braxton is doing a great job.

Darryl Slater, NJ Advance Media: Zach, looking forward to getting out there with not only pads on, but actually playing a preseason game because (Robert Wood Johnson IV), the owner, was obviously praising you but he said, “Look it’s in shorts.” And, I’m sure you realize it’s in shorts. So, how much are you looking forward to actually playing football the way you always have?

Yeah that’s the crazy thing about being a quarterback, our team periods out here really are pretty accurate to what a game is like. You’re not getting hit but you’re feeling the pass rush a little bit around you and really as a Quarterback the mental strength is everything. How well can you process in chaos and understand the situation and what’s going on. I think we’ve done a good job of simulating that. I think the game’s going to get even faster the closer we get to preseason and then into the season it’s going to be faster than ever. So, it’s really just preparing for that, but I’m excited to get into it.

It’s awesome, I love everything about it. What a great place to come to work every day. It’s seriously a dream come true, I don’t know if there is a better job in the world. I think it’s cool just because (New) Jersey is a great place to be able to focus on football. You got the city close by if you want to go in and have some good dinner or go to a game, but when we have to focus on what’s going on this is a good place to be. There’s a lot of great people out here, very nice community, the facility is awesome, and I enjoy being here every day.