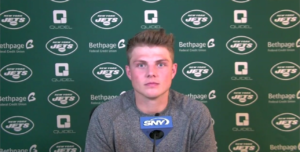 DJ Bien-Aime, New York Daily News: Zach, how I guess cool is it that you’ll be able to, obviously you’re not playing directly against Tom Brady, but you’re going to be in a game playing against Tom Brady. So, how cool is that moment for you?

Yeah, I think it’s more exciting just because of how long he’s been doing it for. I was born in 1999 and his first year in the NFL was in (2000), which is, it’s pretty crazy to think about. My entire life I’ve known him he’s been in the NFL. I think just knowing the fact that he’s still going and I’m able to play against him is really cool because I’ve obviously watched him my whole life. So, I think it’ll just be exciting, the NFL works like that.

Rich Cimini, ESPN: Zach, I actually think it’s the largest gap between two starting quarterbacks in age in like 60 years or something like that, something ridiculous like that. But I was wondering, growing up through college, high school, watching tapes of him, obviously, is there like one thing, if you can pull out of him and use, what would it be?

He has an amazing work ethic and I think it’s just probably the way he approaches the game. He does it the right way, he makes sure that he’s studying the way he should, and I think he just has a relentless mindset to just, to be the best. I think that’s what he’s competing for right now is just how long can he keep going and doing it at the highest level, it’s really cool to see.

Maybe a little bit. I don’t necessarily spend a ton of time watching our defense just because I’m on the Surface trying to see what (we did), so I’m going to take the same approach I’m always taking as far as watching, following along of what the defense has going. I don’t know if I would be necessarily sitting there trying to learn mid game, I’ll definitely go back and probably watch it and maybe see different things that he did later on like you always do in film study, just to learn, but definitely out there on the field, just making sure I handle what I need to handle and just staying focused on our job first.

Al Iannazzone, Newsday: Zach, I know you used to watch Aaron (Rodgers) a lot, did you watch Tom a lot? Did you try, I know you’re different quarterbacks, but did you try to watch him at all, too?

100%. We still do in our meetings just because he’s a great example to learn from as far as just fundamentals and always having your feet in the ground and ready to throw. He works the pocket almost better than anyone I’ve ever seen and it’s really because he doesn’t ever get out and run, but he knows how to operate in such a small pocket, so a lot of the times when we play against teams that he’s played against, that’s always a game I’ll flip on, just to see how the greatest quarterback was able to go through it and the things that he did maybe that helped him to do well in that game.

Dennis Waszak, Associated Press: Did you think it was cool growing up that you were born, that you shared a birthday with Brady? Was it something that you kind of like to your friends, “Brady and I have the same birthday!” Was that something when you were growing up?

Yeah, it’s funny. I used to always, I think I’ve known that since I was in elementary school or something, somehow, I found that out. Maybe it was social media, someone posted the same day. I’ve always thought that was just kind of cool, the same August birthday. But the cool thing was I think he was born in 1977 and I was born in 1999, so 22 years later, which is crazy, right? To be playing the same game. I always thought it was interesting.

Joey Chandler, NJ Advanced: Has that given you hope you can have as long of a career as Brady did?

Absolutely, I think everyone would and you can just see at this stage, he’s doing it because he truly loves the game and the challenge of it, everything that it offers. It’s something that he’s proven to himself that he’s able to take care of himself well enough to play well into his 40s and he’s doing an amazing job of doing it. It’s really cool to see. It makes guys like me try and go as long as I can, as well.

Mark Cannizzaro, New York Post: Zach, your defense, which is very young, obviously like the whole team is, is pretty stoked to kind of match its wits against a guy like Brady. Do you have that same kind of vibe, even though you’re not playing against him so to speak? Just to kind of, measure up is probably not a fair thing to say, but you know what I mean. Just you against him, your team against his and what would it mean if you were able to beat Tom Brady on Sunday?

I mean of course we’re trying to go for the win. As far as me vs. him, that’s the last thing I would think about. It’s our offense against their defense and I almost feel like the game is almost split. It’s not like I can do anything about how our defense does. So, I just need to control what I can control and I’m 100 percent worried about the defense that we’re getting from them and of course it would be awesome to say that we beat the Bucs and to be able to play against Tom Brady, to beat those guys. Of course, that’s the goal, but it’s definitely not me against him.

Yeah, I think I’m just trying to show my passion for the game and how much it means to me in critical situations when we’re out there on the field. Just the sense of urgency to get things done and to show those guys in my eyes, just how important it is and that when they know I’m giving it my all, I know they’ll do the same thing for me, which is really cool. I feel like that’s something that can always keep improving but it’s easy when you have a good group of guys in there.