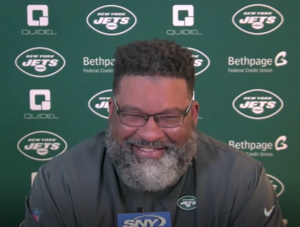 Good afternoon. I’ll start with the injury report: Jamison Crowder did not practice with a calf; C.J. Mosley, his back; Elijah Riley, concussion; Sheldon Rankins, his knee; and Bryce Hall, illness, non-COVID; those guys did not practice. Limited practice today was: George Fant, because of his knee; LDT (Laurent Duvernay-Tardif), because of his ankle; and Quinnen Williams, his shoulder. That’s the injury report and I’d like to open it up for questions.

Brian Costello, New York Post: Ron, could you just take us through kind of this morning? It must have been a crazy morning and just kind of how you got the news and what these last few hours have been like for you?

We had meetings, virtual meetings, and at about 11:15 or so, Coach (Robert) Saleh called a staff meeting and that’s when he had informed us that he tested positive for COVID and that’s when he also informed the staff and that I will be standing in until he gets back. As far as it’s gone, we had walkthrough at noon so I had like 45 minutes for it to soak in. Addressed the team on the field right before walkthrough. Told them what Coach Saleh had said and we commenced the practicing. Here we are.

Connor Hughes, The Athletic: Ron, have you and throughout your career, whether it was in the college ranks or in the professional ranks, ever had to do anything like this? Not fill in for COVID, but in terms of just kind of run the show yourself?

Not to this extent. I’ve had to run a practice once, I was associate head coach at Duke and I had to run practice one day. But other than that, no, this is it.

The good thing about that is that there is a good plan in place. Robert has done a great job of hiring a staff, of course I’m a little bias about that, but he has a great plan and he’s very clear with his plan. So, that part, I’m not reinventing the wheel here, I’m just trying to steer the ship, keep the ship steered in the right direction. So far, no issues. Hopefully it stays like that.

Dennis Waszak, Associated Press: Ron, jumping off that, if it had to happen, is it the fact that it is late in the season and you’ve had all these guys, they know you, you know them, that kind of thing. Does that help in terms of kind of making that transition where you’re kind of leading these guys at this point?

No question, it does help. I was one of the few that didn’t know (everyone). There was a couple, Aaron Whitecotton and Rutey (Mike Rutenberg), I think were the only two coaches on the staff that I’ve had any dealings with, other than Robert of course. So yeah, being this late in the season, it does help. I think these guys know what type of person I am or what type of coach I am and know that I’m strictly team. There’s no selfish or personal deal with it at all. It’s strictly team. Whatever I can do to help this team beat the Jaguars on Sunday. To answer your question, yes, it was good that these guys know me now.

Connor Hughes, The Athletic: Your history in Jacksonville, although I know it wasn’t with this coaching staff, but I’m sure there’s at least some player crossover, does that help you at all with kind of stepping in here for Robert?

Yes, we talked briefly last week when he was not feeling well and he informed me that if something did happen that he wanted me to fill in for him, yes. So, we had briefly discussed it, yes.

(follow up) What does that mean to you, that you’re the guy that he would put that kind of faith in?

Well, I’ve known him a long time, but I’m not going to get into his train of thought as to why he chose me. I think that would be a question that he would be better able to answer.

Everything’s been positive. Basically, I told them that we’re all professionals, nobody knows what’s going to happen, but what we do know is that we have a game on Sunday, at this point, maybe that changes tonight, tomorrow, day after, who knows? But right now, we’re getting ready to practice and we’re all professionals, and last I saw, they didn’t change any of those routing numbers, okay? So, let’s go out here and let’s practice and let’s get better and let’s start preparing to get ready to beat the Jaguars on Sunday.

Brian Costello, New York Post: Ron, is the only thing Robert’s not able to do right now, basically at practice? Because you guys were on a virtual schedule anyway, so is he still in all the meetings and everything?

We’re going to discuss it more, but at this point, I think he’s going to run all the team meetings virtually. But, like I said, that hasn’t been etched in stone yet, so we’re going to, you know, it was 45 minutes before we went out to practice, so there’s some logistics and some things we’ve got to clean up. But it shouldn’t be an issue.

Rich Cimini, ESPN: Ron, just typical head coach-type question here, but with these injuries, are any of them, like with Crowder and C.J., C.J. usually takes off on Thursday as a rest day, so are any of these serious to the extent that they might miss the game?

You know, could be, could not be. At this point I’m not at liberty to say. I’m going to talk to the trainer and see how it progresses. But right now I don’t have knowledge of that.