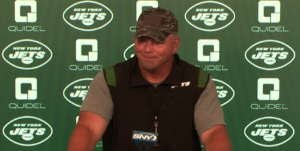 Yeah, it is. It’s been good to see those guys battling back and forth, and it’s been a really tight competition. They’re both doing a really nice job, and it is neck and neck so far, and we’ll see what happens as we get through the mandatory minicamp and into training camp. But of course, what matters is in the games in the preseason, that’s what’s going to determine who we keep and who we don’t. They’ve both been doing a really nice job, both have adjusted really well. (Greg) Zuerlein has come in and fits right into our room and has done a fanatic job so far. Eddy (Pinero) has improved his rise and things that I’ve asked him to do. So, it’s going to be a heck of a competition.

Ryan Dunleavy, New York Post: Zuerlein, how does he look health-wise after the back surgeries he’s gone through? And you’re only his second special teams coordinator in an 11-year career which I imagine is kind of unusual. So how have you guys kinda hit it off?

It’s been good. First question, I think his back is fine. I don’t see any issues that he’s had since he’s been here. He’s been great in the room, done everything I asked him to do. He’s a pleasure to be around. I think that whoever we end up keeping, I think we’re in pretty good shape to be honest with you. We’ll see how they do as we progress here.

Brian Costello, New York Post: Is that competition dead even or does Eddy have the advantage because he’s the incumbent?

Brian Costello, New York Post: The way the draft shook out for the team, Joe (Douglas) made some moves for some reasons on offense and defense, ended up you didn’t have any picks after the fourth round which is sometimes where you find your guys that are going to play teams. Has that made it any more difficult of trying to find new pieces for your different teams?

Well, I think so, but we’ve also added some veteran guys like Jacob Martin, (C.J.) Uzomah, (Tyler) Conklin, and those guys that I think will help. We did lose Griff (Ryan Griffin) and we did lose Dan (Brown) and stuff like that, but we’ve still got (Justin) Hardee and Del’Shawn (Phillips), (Hamsah) Nasirildeen, and hopefully (Jamien) Sherwood comes back and he gets healthy. We’ll have to see where it goes from here. I have high expectations for the group as I always do. But we just got to play really, really well and give us a chance to win. That’s what it comes down to. Hopefully, we can keep our return game going. Hopefully, we can convert field goals. Hopefully, we get the field position needed for the young quarterback and help this team win some football games. That’s what matters, that’s what it all comes down to.

Ryan Dunleavy, New York Post: Obviously, you’re set with Berrios at both spots, but you had Calvin Jackson in Rookie Camp returning punts. Is he a guy with some special teams ability? Do you have any say in , maybe we should sign this guy?

I think the kid has certainly showed. I’ll tell you when you’re old is when you played with his dad. I played with his dad my rookie year. So, he’s a heck of a kid and has done a really nice job. There’s a bunch of guys back there catching every day. It’s just like any other position, we’ll see what happens in minicamp, you’ll see what happens in the preseason, and what really matters is the games and how they do.

(follow up) I’m actually writing about him and his dad. What do you remember about his dad?

Dan Leberfeld, Jets Confidential: With the kicking competition, how risky is it to factor in the kicks here too heavily considering you don’t play here? Is it hard to gauge how they’ll do in the stadium with them kicking here, since the wind and things are different?

I study that stuff quite a bit, and (Zuerlein) has done really well in (MetLife) stadium. I forget the exact, but that’s all the stuff we put together when we go try to sign these guys. That’s one of the first things that I would look at if he’s kicking in an indoor deal, how many times has he come out here and played the Giants, because he was in their division, what did he convert on their kick rate? That’s one of the things I looked at pretty heavily and he was fine.

Brian Costello, New York Post: With Braden (Mann) last year, his season kind of got derailed early on. What’s the next step for him in year three?

I think you’re going to see some pretty big improvement from Braden. You know you’re definitely right, when you’re out eight games and you come back with a knee brace on and everything like that, and you’re not used to punting and stuff for weeks at a time. And you’re playing two or three games of those games that he did come back he had his knee brace on and finally he got it taken off. I think you see in the last three or four games, he’s punting a lot better. I have high hopes for Braden. I think he’s got as much talent as anybody in the league, I really do. It’s just a matter of him putting it together and hopefully we’ll do a hell of a lot better protecting him this year. We got to be more physical out front and not let that happen.

Dan Leberfeld, Jets Confidential: With Braden, how much did the brace affect him, or what specifically might it have impacted in terms of his kicking when he had to wear a brace?

I think it’s all about confidence. Any time you have something that you’re not used to wearing, you have some big, bulky knee brace on, whatever position you’re at, especially that position, it’s going to make a difference in how you perform. And the confidence level – are you 100 percent healthy, are you 90 percent healthy? I think that all comes into it.

Obviously, yeah. I think anytime he has it on his plant leg or he’s kicking like that, his knees are so close together sometimes that would rub on the brace. He did a heck of a job fighting through it, really improved. So, like I said, I have high hopes for him this year.

Brian Costello, New York Post: You still like (Mann) for kickoffs or will the kickers be fine?

We’ll see where it takes us, but those other two guys are both healthy and both have really good kickoff legs. I thought Braden did a heck of a job kicking off last year and we’ll see what happens.

Andy Vasquez, NJ Advanced Media: You guys obviously had a revolving door last year and a lot of those guys were young. So, with the new guys coming in who have experience on special teams, how much does that kind of help you guys try to assimilate the new pieces and bring this all together?

It all depends on who we keep and who we don’t keep right. So, we always try to mix and match and change positions, so people have flex playing, rotating from guard to tackle, tackle to slot. The more guys can do, the more flex they have, the more valuable they are to us as special teams guys. Obviously, you like the guys that can play all four phases. We’ve got some really good guys that are proven guys here. Hopefully with the addition of the new guys, I’m not going to put any expectations out there, but I have high expectations for this group, just like I do every year.

Brian Costello, New York Post: Brant, just a big picture question: You’ve been here longer than any other player or any other coach in this building now. How do you feel about where this team is at in terms of turning the corner from these losing seasons that you’ve experienced and get things right?

That’s a really good question. I think that this team is on the rise. Again, I’m not going to put any expectations out there, but I think there is more competition at every spot than I’ve seen here since I’ve been here. I think Joe and upstairs have done a fantastic job at bringing in more talent. I think they are going to be well coached across the board. The sky is the limit for this team. I think that we’ll surprise some people as far as how physical this team is going to play. I think we are faster and we’re bigger. I have high expectations. I think we are going to win some games this year, I really do. That’s just kind of how I feel about it.

Awesome. I mean he’s top three in the league in what he does. There are some improvements that everybody can make, and we are working on the things that he needs to work on. As far as a difference maker that you have to game plan around, that is a guy that you have to defend on every rep. If not, he’s going to win. That’s the first thing you do as an opposing coach is try to game plan for guys like him. I think he’s top three in the league overall special teamers. He is a leader in our room, obviously being a captain. I don’t see why he would do anything else but do what he did last year for us.

Brian Costello, New York Post:  I’m sure you study this, but knowing penalties on kicks now in the NFL across the board seem so high. What do you do during this time of year and training camp to try to make sure your units don’t commit those penalties?

I think, number one, we committed way too many last year and it wasn’t acceptable. You teach fundamentals over and over and over again, and you show all those penalties in the room, and you can’t show them enough. You teach them that if they’re doing that in drills it will be called. So we really try to stress the importance of field position. 10 or 15 yards is the difference between seven, eight or 10 percent depending where you are on the field as far as score percentage for the offense. It’s a huge deal for us and something we need to make a big improvement on this year for sure.