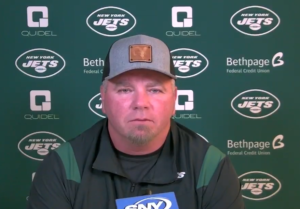 Brian Costello, New York Post: Just curious, the couple weeks where you guys were having all the COVID issues, the Jaguars game and then last week, we focused on offense and defense on that, but I have to imagine that caused some havoc for you. What were those weeks like dealing with not knowing who you have each week?

It obviously makes it tough. You got guys that practice all the week, and they get all the reps and then all of a sudden they get COVID and you can’t play them and so you’re putting people in there that’s had limited reps on the game plan and everything like that and everybody on the practice squad has to study and know the stuff because they can be elevated at any time. But I think overall, I think this group has really been resilient with all the injures that we’ve had this year, with all the young guys that we’ve played, with all the COVID activations and deactivations and things like that. I’m proud as hell of my group, I really am. I think they’ve battled every week and really proud of those guys and the way that they were prepared. Leon (Washington) and Ghoby (Michael Ghobrial) have done a nice job coaching and I’m really, really proud of this group, really young group. They didn’t blink at all and think bad things happen all the time. I’m really proud of this group.

Brian Costello, New York Post: Brant, how about the job (Eddy) Piñeiro has done for you? Kind of stabilizing that kicker position the last few weeks.

Rich Cimini, ESPN.com: How about the kind of year that (Braxton) Berrios has had? He’s going to end up leading the league probably in kickoff returns, I think he’s right up there in punt returns if he gets enough to qualify, he might win that too. How unique is that and how much has he been impactful on your teams?

He’s been a huge impact and I think that his preparation is huge. He works harder than anybody, he studies a ton. I think he’s done a great job running all the tracks that we ask him, and he’s made people miss and he’s accountable to his teammates every week and he plays his butt off every week. With that being said, the guys blocking for him up front and the mishmash of guys that we’ve had that have bought in to the scheme and have come in and blocked for him, it’s a little different when you’re a player up front and you know you got a legit guy back there. You block your tail off and even maybe a little strong, more than you would normally, right? I think there’s a culture there that actually, they start really, really taking pride in it and everything like that one they start seeing a couple returns getting ripped off and they buy into it and they’ve done a really nice job. Certainly, some things that we can correct and fix, but I thought overall, Berrios has been fantastic, the guys blocking for him have done a really, really nice job this year, especially being so young and so many new guys in.

Mark Cannizzaro, New York Post: Brant, Robert has talked a lot for the last month about December football for this young team, trying to get it acclimated, play these players acclimated for hopefully playoff runs for next year and beyond. But you guys play a game on Sunday with a little added juice to it in Buffalo, they’re trying to win their division, your division. How much can that help your group, your young team and then these young players, even though you’re not playing for a playoff spot, going forward?

I think any time that you can go play in a playoff atmosphere like that and what it’s going to be up there, I’ve been in playoff games myself up there, I’ve been in big games like that up in that area. So, they are fantastic fans up there, they get after people, they’re yelling stuff at you, they’re screaming at you and it’s a heck of an atmosphere to play in. I think the more these young guys can be a part of that, and you’ll learn every week and how to handle crowd noise and how to handle the fans and everything like that and the more pressure situations that we can put on them, the better. I think that that’s just going to excel the growth of this team, if you can put them in situations like that and I think it’s awesome to be a part of, especially if you’re a young player going into an environment like that.

Mark Cannizzaro, New York Post: You’re unique and your three head coaches in here, I’m just kind of curious of what you see in Robert’s program here? I’m not looking for you to compare it to the other guys, but what do you see going forward out of this group and this space that’s being built?

I think he’s done an outstanding job. I think he’s got a great message, I really do. If I was a player, I’d want to play for him. He’s positive all the time, he does a nice job re-enforcing his message all the time. I think that I look forward to, I honestly do, I think this team’s going to get better and better and it’s going to keep getting better and better. Obviously, they’re going to add in a bunch of new pieces this year and get a bunch of pieces that we lost and due to injury back. So, I think that next year, the year beyond, I think we’re going to be big time improved in this area and I think he’s done an outstanding job, I really have. He’s kept the ship afloat, as far as like I said, his message and his positivity and everything like that, where a lot of people wouldn’t be able to do that. I think he’s done a great job.

Dennis Waszak, Associated Press: Brant, as far as your unit itself, we always talk to you about how much change and turnover, like you were talking about earlier with injuries and COVID and all that, but the fact that you have, like some of your key players on special teams are some of the young guys that will be here for a while, does that kind of give you some optimism where you know, going into next season, you have some core guys who are going to be here for sure, in like (Jason) Pinnock and some of those other rookies that are playing now for you?

Yeah, there’s a lot of guys that we’re excited about for the future, and I would’ve loved to have them for the entire season, right, but when you get injuries and COVID and everything like that, a lot of guys have to start and so you lose them right away. There are certainly some guys here, especially in the core and in the outside core that I think you’re going to be able to count on and play really good football with and that you can win with. That’s what is really exciting and that’s even being said that we lost a bunch of guys due to injuries and things like that, like (Blake) Cashman and all those guys that were some of our better players. With these young guys, like I said earlier, they haven’t blinked. I am really, really proud of this group. It’s one of the prouder times that I’ve had since I’ve been here. They have battled and battled and didn’t blink when all this stuff was going on, and it’s hard as hell, especially in your rookie year, your body is hurting all the time and, mentally, you’re worn out and to have me just getting after you at times and everything, I think they understand that’s our job and everything to try to get them to where they want to go. They don’t think they can get there unless someone is pushing them. I think this group has bought in, done a great job and I’m really, really proud of them.

Brian Costello, New York Post: How would you assess Braden’s (Mann) year, Brant? Obviously, the injury muddied things up for him, but how do you think he did in his second year?

I think the injury hurt him a little bit, I really do. I also think that he’s done a better job this year at controlling returns. I also think, he’ll tell you the same thing, he had some kicks that he’d like back, but statistically, I think we’ve kicked in shorter fields this year with inside the 20’s and stuff like that when he’s been back. I think he’s done a solid job. Is there a lot of improvement that we can all make? Me as a coach, him as a player, everybody’s got to make improvements. I think he’s growing, just like anybody, and we all got to keep in mind it’s his second year and he’ll get better and better as we go.

Andy Vasquez, The Record: Brant, Thomas Hennessy is wrapping up five years with you guys, just how have you seen him grow over that time and what has he meant to the unit overall?

He’s a huge part of the unit. He’s starting to be more vocal which I asked him to be, because a lot of people respect him. He does everything right. The guys a beast, I love the kid. He’s a worker, anything that you ask him to do, he does it at full speed. He does every single thing that you ask him and being a professional and practicing hard every day. If I ask him to go do some big bag work with me, he’ll go do it. If I ask him to take some extra snaps for the other kicker, the other punter or whatever, he has no problems doing that, even though he maybe a little sore. Those are the guys that you want on your team, and those are the guys you can win a Super Bowl with. He’s one of those guys.

Dennis Waszak, Associated Press: Brant, how important has Justin Hardee been? He’s a guy who came in with a reputation being an excellent special teamer, I mean he’s had a good season for you guys.

He has, he’s been important to what we do. I think he’s had a good year, for sure. I think when you have a guy like him, what it does is it takes somebody out of the box. So, instead of everybody rushing you all the time, singling your gunners, they can’t single him because if they do, it’s a fair catch every time and they know it. So, they have to pull a guy out of the box to go try to double him, and a lot of times they can’t get that done even. Just having a guy out there on the field like that makes a huge difference. He’s taken a leadership role in the room as well. Him being voted captain by his teammates, big honor for him. I think that he’s done a really nice job. He’s got some things to clean up, too, but he’s been a pro here. He’s done a really nice job for us.