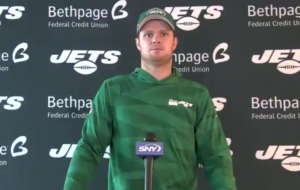 Al Iannazzone: Have you guys bounced the loss and how do you expect your team to respond this weekend?
Yeah, these last couple days we’ve had some really good practices, our guys have bounced back well. Again, it’s a tough Seattle team, they got a really good defense, but we’re looking forward to the challenge.

Brian Costello, New York Post: Sam, I know we asked you about Jamal (Adams) the other day, kind of as a teammate and stuff, but just now, strictly as an opponent, even if he hadn’t played with you for two years, what he does and how he’s able to blitz the quarterback, 7.5 sacks, you saw it plenty here, is he a guy like almost like an edge rusher that you have to kind of be aware of where he’s lining up and pay some attention to him pre snap?
Yeah, I mean he does everything really well, he attacks the run, rushes the passer better than most, so again we’re just going to have to be aware of where he is. And Jamal is a great player, obviously yeah, it’s a little bit different seeing him on the other side and scouting him and doing all those things, but again like I said in the beginning, we’re looking forward to going against him.

Al Iannazzone, Newsday: It’s obviously a business and you know that, but what was your reaction at the time, were you upset that he wasn’t going to be back with you this year?
Yeah you know, Jamal’s a really good dude and obviously a good player. So, I was going back and forth and just talking to some guys on the team and but again, like that’s stuff that we can’t control and as a player like it is what it is. I still stay in contact with him, obviously not so much during the season but in the offseason, we stay in touch, so Jamal’s a really good dude and obviously a really good player as well.

Brian Costello, New York Post: Sam, you guys ran the ball as effective as you had in a while on Sunday, you know, what could that do for the offense if you can kind of get that that running game going?
Yeah, having a good run game is huge. Again, it opens up things in the pass game and really opens up everything, so yeah, that’s a key part to our success. But again, you know if they if they try to take the run away, we got to be able to throw it over the top.

Peter Botte, New York Post: Uncharacteristic of a Seahawks defense, they’ve actually given up like over 400 yards a game this year, I think it’s second most in the league. Where do you see the opportunities I guess to move the ball this week?
Yeah, like I said before they’re a really good defense and they’re really well coached. I just think sometimes, whether it’s missed assignments or guys just going up and making really good plays on the outside and in the middle of the field, in the pass game. So, just like any other team there’s ways to be able to make our hay, but again we got to do a really good job with all the details and focus in these next few days to prepare.

Brian Costello, New York Post: Sam, is your shoulder now close to 100% or how would you describe where you are with the shoulder right now?
Yeah, I mean it’s close enough so, but yeah, it feels good. You know, I’ve taken a couple shots since coming back and it hasn’t really bothered me, so yeah, it’s feeling good.

Peter Botte, New York Post: And (Denzel) Mims has given you guys a new dimension these last few weeks, what will losing him this week, how will that affect your offense?
Yeah, again, it sucks obviously not to have Denzel and obviously what he brings our offense is huge, but it’s next-man-up mentality for us, we have great guys to be able to step in and make plays and we’re going to look forward to them having the opportunity to do that.

Al Iannazzone, Newsday: Sam, what have you learned about Ty Johnson and what do you think of you know obviously what he did last week?
Yeah, you know obviously he had a really big game for us. We saw flashes of it in practice every day, he’s got great speed and great vision, so just his ability to get in and out of cuts and be able to go downhill and stop on a dime is obviously key at the running back position and I think he does it really well. It was really fun to be able to watch him have that game on Sunday, obviously, you know it’s tough not being able to pull that one out, but he’s a great dude and a really good runner as well.

Brian Costello, New York Post: Sam, do you know Pete Carroll at all from USC? You watched his team growing up I imagine?
Yeah, I was a big fan of those SC teams growing up, it’s been well documented. And I don’t know him personally, even going to SC and being there, you know he was pretty busy when I was there, so I haven’t met him.