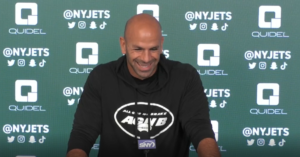 Brian Costello, New York Post: Do you have an update on Duane (Brown)?

From the information that we gathered today, he’s going to be out this week. We’re still gathering information as it pertains to the rest of the evening. We should get some more, which will decide what will happen next week and the following weeks after.

Zack Rosenblatt, The Athletic: Is there a fear that it could be a multi-week thing?

Yeah, I mean there’s that possibility that it could be IR, but again, there’s a lot of information that’s going to come out in the next 24 hours.

Zack Rosenblatt, The Athletic: So, where does that leave you now with the offensive line? You’re probably still figuring it out I guess, but do you envision moving George (Fant) back over at left tackle?

Yeah, so George is going to the left and Max Mitchell is going to get his opportunity at the right spot.

Dennis Waszak, Associated Press: Robert, when did Duane get hurt? Was it at practice or working out?

Yeah, it was a practice. We believe it was Monday. Not to get in the specifics on exactly what it was, but I think we can pin it back to Monday.

Brian Costello, New York Post: Robert, I don’t know where you were on Max Mitchell in July when you were envisioning things, but it seems like his course has been accelerated here. How prepared is he starting against the Baltimore Ravens on Sunday?

Well, one thing I can say, if you’re on an NFL roster whether you’re practice squad or not, you’re one play away. That’s how quickly it can happen. I’ve said it before, Max is much further along than we thought he’d be at this point, so we’re very confident that he’ll be able to step in and do his job. We think his, the acceleration is going to go even faster because there is nothing like getting reps in the NFL and getting baptized early in your career. So, we have a lot of faith in him. He is a fantastic athlete, he is very smart. He’s just got to learn the nuances of the NFL game and the game within a game when it comes to the run game and pass game and all the things that are asked in that one-on-one battle with a defensive lineman, but really excited about where he’s at and really excited about where he’s going to go because he’s going to be a really good football player and really excited for him to get this opp (opportunity).

Neil Best, Newsday: How has he been physically, is he good?

Dan Leberfeld, Jets Confidential: When you sign a 37-year-old player, is there a risk because of all the wear and tear over the course of his career?

No, there’s risk with everyone. I mean when you draft a kid, you’re always going to have risk. Duane has always been very healthy his entire career. He takes amazing care of his body. It’s unfortunate it’s a football injury, the guy moves around like he’s 29, so he’s got a lot of life left back in his body. You could always play hindsight game and all that, but with Duane, there were no indicators.

Andy Vasquez, NJ Advance Media: With Max (Mitchell), he got to play some in the Eagles game against a couple of the starters, so what do you think he took away from that experience?

He lined up right there, his first, I was watching it with Mike LaFleur this morning. His first NFL snap was trying to reach Fletcher Cox and he did well on the play. His first pass set is on Haason Reddick, so he’s already semi been baptized, but now he gets a relentless Baltimore defense. He’s going to see Calais Campbell who is one of the best of all time, so he’s going to get his opps (opportunities) and feel pretty good about the way he’ll play.

Brian Costello, New York Post: Do you shake your head at all? You did all this stuff this Spring and Summer to try to avoid injuries. Duane Brown, he’s 37, but he’s played every game the last four years. It seems like bad injury luck happening again for this team.

Injury is luck, but I do think that we’ve done a really good job in regards to injury. We’re pretty healthy. Obviously, Zach (Wilson), Mekhi (Becton), and now Duane are the three most notable ones. Otherwise, we have a full roster. Overall, we feel really good about the plan. The injuries that did happen were football related. That part is luck. Every team is going to suffer that. So, it’s next man up and we got to roll.

Zack Rosenblatt, The Athletic: We have talked to you a lot about continuity of the offensive line. These guys have to battle on snaps together, now you have to do another lineman. What’s the level of concern with these guys going out on Week One?

Brian Costello, New York Post: How anxious are you to see the rookies on Sunday? We’ve talked about them for six months.

I’m really excited. It’s like revealing new toys, right? Or opening up a new box of golf clubs. Some of you guys can relate. I know Garrett (Wilson) is excited, Breece (Hall), all the way through – Micheal Clemons, Jermaine (Johnson), Ahamad (Sauce Gardner), Max (Mitchell). We got a full set of draft picks rolling on Sunday. So, it’s going to be fun to watch them play. Again, they’re going to have rookie moments, but one thing I’ll tell you is they’re going to play their absolute tails off.

Mark Cannizzaro, New York Post: You’ve been a part of winning teams and not winning teams and young and old. I believe Joe Flacco, a couple of weeks ago made a reference to the timetable of when this locker room of young talent figures out how good they can be. What is the secret, is there a secret? What is the challenge and what does it take for them to figure that out?

That one’s tricky. I’ve said it before, this is the fifth time I’ve been a part of a rebuild, and I’m going to reference my earliest one which is San Francisco. In 2017, we won six games. In 2018, we won four games. We had this young roster – Kittle, we have (Nick) Bosa, we have Fred Warner who’s going into his second year going into 2019. We weren’t sure, and none of us were sure. We go and beat Tampa. We play a couple of games where we win, and it wasn’t until that fifth week that we beat the Rams where everyone was like, ‘Damn, maybe we’re pretty good.’ That’s when the personality all came out. It comes down to having success, believing in what you’re doing, and continuing to stay focused even through adversity like we had in San Francisco, but through adversity, to believe in the process and to believe what you’re trying to accomplish. Eventually, you’re going to learn how to close out those fourth quarter games, and you’re going to learn how to win those games. That’s kind of where you feel like with this young group and all of these gamechangers we think we have. When they learn how to close games and they get that experience on how to play in these type of games and these battles that happen, they start gaining that confidence and that’s when everything takes off.

Mark Cannizzaro, New York Post: (Follow Up) Is that a lot to ask for it to happen Sunday, start to happen on Sunday? Do you need that positive reinforcement of a result to get over that hump?

You always want the result, but you have to keep the main thing the main thing, which is doing your job 100% of the time. If you trust in yourself and you trust in what you’re trying to accomplish, you’re going to learn. You’re going to learn on the fly. It’ll be awesome if we can learn with winning, but at the end of the day, it’s staying focused on everything you have control over, which is your job and your job first. If everyone does that, I think we are all going to like the result.

Dennis Waszak, Associated Press: With George Fant’s versatility, does that kind of relieve you guys that he can go both sides? Just kind of makes this a little bit easier for you guys to do, for him to go left to right back to left?

I’m sure it’s frustrating for George. Everybody wants to settle into their job. Credit to George. He is an uber athlete. He’s got great versatility. His whole career, he’s always been a team guy first. He’s a phenomenal teammate. For him to sacrifice and jump left, right, left, right. It’s not easy for him, but at the same time, he’s so gifted and so athletic and smart enough to be able to do that. So, him going to left side this week, he’s making it very easy for this transition to happen.

Jeane Coakley, SNY: What type of atmosphere are you expecting at MetLife Stadium on Sunday? Home opener, season opener on September 11th?

Dennis Waszak, Associated Press: Robert, (Saleh) does it mean a little bit more? You talked about it when you were hired, September 11th and the impact it had personally for you, but the fact that that day you’ll be coaching right across from there and probably a lot of people in the stands have been directly affected?

There’s no doubt. It’s amplified because it is 9/11 in this city, not so much for me, but for the people who are in the thick of it. Obviously, I know it’s documented about my brother, but I heard stories this week about the cars being at MetLife Stadium (Meadowlands) for months afterward because no one could pick it up and then the Long Island train station and the tragedies that led up to this. I think it’s very personal for a lot of people and I think that passion is felt country wide, not just in New York, but it’s a little bit more important here and you know that tomorrow means a lot more than just a football game to a lot of people like you said in the stands. That’s why I think it’s going to make Sunday pretty cool.

Brain Costello, New York Post: Robert, (Saleh) after Zach’s injury, you pretty quickly said he should have run out of bounds. When we talked to him the other day, he said I’m not going to change the way I play, it was a non-contact injury. I mean I was surprised by that answer, what do you take from what he said?

Yeah, I agree with him. You can’t change the way you play. I think everyone would agree like when he had that 50 some odd run against Jacksonville, we were all pretty excited about it, that’s his style. What he’s going to learn is how to showcase his style and the argument can be made that in the first preseason game, the second series of a first preseason game is not the time or the first quarter of a first down scramble may not be the time, but to save the amount of times you can expose yourself to having to make those hard cuts, to make those body exposing runs, how do you limit those and how do you pick and choose your battles, that’s where he’s going to learn, but as far as changing his style of play, you don’t ever want to change. It’s just having the awareness of when you want that style of play to be showcased.