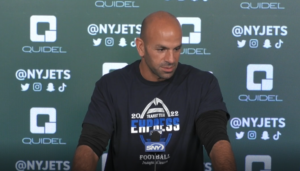 Quincy (Williams) will be out, dealing with his ankle, day to day, so we’ll re-evaluate him next week. Otherwise, we are good to go with everybody else, so (Brandin) Echols, JFM (John Franklin-Myers), Zach (Wilson), they are all full participants.

He looks good, he’s getting comfortable standing behind the offensive line again, so excited for him to get his opp (opportunity) on Sunday.

Brian Costello, New York Post: Do you have to do things Sunday to try to help him along? Obviously, he’s going to be rusty, been awhile since he’s played.

I don’t know about helping necessarily, I think Mike (LaFleur) does a really good job creating game plans and whatever we feel we need to do to attack Pittsburgh, that’s what we’ll do.

I don’t know about spark. Obviously, it’s an exciting time for everyone, but Zach (Wilson) is a piece of the puzzle. There’s a lot of things we needed to fix, offensively, defensively, and special teams, and that’s our focus more than anything and hopefully, we can all raise the level of our games and make it a smooth transition.

Antwan Staley, New York Daily News How do you keep him from trying to do too much?

Just keep the main thing the main thing. Like I’ve said, it’s not the Catalina Wine Mixer, just go in, have fun, he’s been playing the game since he was a little kid and play the game and execute the game plan exactly the way he’s been doing it through practice.

Neil Best, Newsday: Based on what you saw from before Zach (Wilson) was hurt, what do you think the potential is for the pairing of him and Garrett (Wilson), what could that look like in a real game?

Yeah, I think just for the entire offense it’s got potential to be special. There’s seven first and second year players taking reps, playing at any one time. So, seven of the eleven players on the field at one time are first and second year players and so they’re growing together. Just the opportunity for them to grow together and click together has the potential to be pretty fun to watch.

Connor Hughes, SNY: I’m sure you saw last night the Tua Tagovailoa injury in the head. What is your guys, not policy, but what is your procedures when a player goes down and it looks obviously, like something bad happened, and you just don’t know yet, like take me through when a player you think you might have a head injury, he goes back with the trainers, like what is that policy and steps?

That’s going to more for the docs to ask. I know that as soon as you show signs there’s, I don’t know the exact procedure. I know there’s a pretty intense procedure though with regards to players safety, and I know it’s called up from above where they’ll call players off just in case somebody missed it, which happens. They’re always looking at replays from my understanding, there’s a lot to it. I don’t want to misspeak, but I do know that the League does everything it can, and they’ve been exhausting every resource they can to try to increase player safety with regards to head injury from the guardian caps to the advancement in helmets, to the rules, to all the different spotters on tape. I think they’ve done an admirable job. I mean it’s pretty intense, but that would be more of a question for a doc.

Brian Costello, New York Post: Robert, you talked about that third down defense, you felt like that was the main problem with the defense last week. Are there things you can do to address that in practice, or is that just kind of attention to detail on those downs?

Yeah, we added another third down period over the course of the week, just trying to make sure that we’re precise in what we’re asking offensively and defensively, but it comes down to execution and it comes down to putting the players in the right position to execute, so coaches and players alike. We got faith that it’ll come around. Some of the mistakes that are happening are obviously very fixable, and just again, looking forward to trying to get right here with that situation.

Brian Costello, New York Post: You faced some good backs already this year with Cleveland and Mixon last week. What does Najee Harris bring to the table?

Another warrior. He’s a bulldog, runs his butt off, patient, strong, fast, big. He’s pretty freaking good, and it never stops. I mean next week we’re going to deal with another guy and the week after and the week after, but Najee and the entire AFC North it just seems like it’s back after back after back, so excited for the opportunity to play him and ready for a challenge.

Antwan Staley, New York Daily News: What stands out to you about the Steelers offense?

Big skill guys. They do things offensively that stress you — run and pass — put you in a lot of run, pass conflicts. Good o-line. (Mitch) Trubisky, like I said, I agree with Coach Tomlin. I think he’s getting better each week. Big backs. Big tight ends. They’re an NFL outfit, and there’s a reason why they’ve gone however many years without a losing record. They’re pretty freaking good, and it’s going to be a challenge for the defense.

Connor Hughes, SNY: We talked a little to Jeff (Ulbrich) about this yesterday, the Steelers are one of the teams that have the veteran quarterback that they’ve committed to as their starter in Trubisky, but they also have the first-round pick behind him. I think any time you have an offense that’s struggling statistically like theirs is, there’s going to be the talk of when and if the quarterback switch is going to change. So, as a team that’s preparing for that, do you have to spend a little more time with a scouting report on the backup than when you were playing the Bengals and their backup quarterback, to just be prepared in case they do make a switch?

You’re always prepared for everybody. Our scouting department does a great job with advanced scouting and kind of giving you a rundown of the players that are on their football team, but at the same time, you got to game plan for who you see or who you’re going to see. If that person happens to come in, we’ll have the quick rundown, give the quick alerts, and then we go play football. That would be about the gist of it.

Neil Best, Newsday: There was a lot of attention yesterday on something Jeff said about Quinnen (Williams) and how he sometimes can be gasping for air. Do you want to clarify what he was getting at with that because some people took that to mean he’s not in shape? How would you interpret what Jeff was trying to get across there?

Quinnen is in the best shape of his life. I’m not going to get into details about what happened yesterday. A quote, in my opinion, was taken and used against Jeff when we all know where Jeff’s heart is. He spent 15 minutes prior to that question showering Q with praise. We have our rotations, we do things the way we do them. Quinnen is in phenomenal shape. It’s kind of bush league to take a one-liner, but it is what it is. We all know where Jeff’s heart is, so no harm, no foul.

John Pullano, New York Jets: Minkah Fitzpatrick is off to a really fast start, what have you noticed about him both in film and all that stuff, and preparing for him, what are you going to do?

Phenomenal football player, very extinctive, not necessarily undisciplined in any sense of the imagination, but sometimes he is not going to do his job because he knows where the play is going, so he is going to do a little bit more. He’s an extinctual, he’s a badass, let’s put it that way, so it’s going to be a great challenge for the offense.

Brian Costello, New York Post: Just back to the Ulbrich thing for a second, it kind of took a life on social media. Your players are in an age where they live on social media a lot, did you have to go make sure Quinnen was okay? Because he might have just seen the bit of the quote that you are talking about, and I’m sure he’s not watching the entire press conference.

Whatever it was, if he did or didn’t, it doesn’t matter. That one, whatever we have to address it will be in-house, but Quinnen also knows where Jeff’s heart is, so I doubt he took any offense.

Oh, that’s the most important part of this press conference then. We’re recognizing Transit Tech High School in Brooklyn, New York, they’re playing their first ever game on Sunday, which I think is pretty cool. Last week we had them out at the stadium, presented them with new uniforms and all that cool stuff, so we want to wish them luck in their first game. Go kick butt.