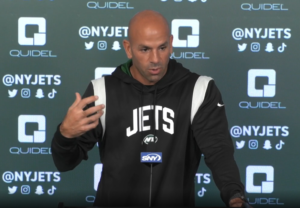 Quincy (Williams), he’s just dealing with his ankle, he’s not going to practice today, he’s doing a lot better. (Brandin) Echols will be limited with a hamstring, JFM (John Franklin-Myers) is limited with his toe, and Zach (Wilson) will be a full participant in practice today.

Connor Hughes, SNY: So, he received medical clearance and is back?

If all goes well this week, absolutely, yeah.

Connor Hughes, SNY: How much of a boost is that going to be? I know you don’t want to put too much on the quarterback for obvious reasons, but the issue that you guys are having at tackle right now with those injuries, at least having somebody with Zach’s mobility back there?

It’s really just exciting for him to get back on the football field. It’s been six weeks and there’s a lot of different things that have to go around in terms of making sure that we run an efficient offense, from us as coaches to o-line, to receivers running routes, everybody’s involved. So, it is exciting to get him back out there, but at the same time, it’s not all about Zach, it’s making sure that we’re executing on all cylinders, as we should every week.

Neil Best, Newsday: Do you feel like you need to tell him to not try to do too much this first day back or you just figure, let him go?

No, he’s in a good mental state, like we all saw, he had a really nice training camp, he was getting better every day and so now it’s just a matter of him getting out there and getting some game time experience and finding ways to get better every single day. So, he’s excited, we’re all excited for him, but at the same time, it’s not about him, it’s about making sure that we’re all doing our part to make sure that we run an efficient offense.

Dennis Waszak, Associated Press: How important was it for him to be able to still kind of participate on the field, especially the last couple of weeks kind of ramping things up rather than having been on IR?

The practice aspect of it was very important, just those little seven-on-sevens that we were able to steal throughout the last couple of weeks kept him engaged, he was fully involved in all of the walkthroughs and the meetings. Still able to get the extra work in with regards to throwing and putting strain on the knee. He’s very comfortable, he’s in a great mental state, and everyone’s very comfortable with where he’s at physically and he’s ready to roll.

Brian Costello, New York Post: Do you guys have any concern just with the state of your offensive line right now, playing backup tackles and he’s (Zach Wilson) coming off a knee injury? Not about his youth, but just about his health, did that factor in at all, just saying, did it give you any pause I guess is the question?

No, his knee, it’s 100% and as far as the tackles are going, we’ve got all the faith in world in the guys that we do have. Max (Mitchell) is playing really well, (Conor) McDermott’s played a lot of good football, and it’s ‘next man up’ so it’s just a matter of making sure that everyone does their part and Zach will be fine back there.

Zack Rosenblatt, The Athletic: You talked about how you need to rip the band aid off and all of that, what’s the level of concern about rust because he obviously hasn’t played in a game in six weeks or whatever it is and he’s just now getting into practice this week?

Yeah, he’s going to have to feel his way through, but like everything else, the expectation is he comes out and he plays to the best of his ability and whatever that is, it is, and you’ll be proud of it. Then, from there we just find ways to get better. So, like I said, he’s going to be one of the ones that you just got to calm down. It’s not the Catalina Wine Mixer. It’s an opportunity to get out on the football field, and hopefully, this is one of many, many, many opportunities to step on the football field for this organization.

Connor Hughes, SNY: Is there anything that you can do to knock that rust off in practice? Or is it just he has to play a game?

He has to play. The best way to get better at football is to play football. You try to simulate. We have our team comps. Our different two-minute competitions. We go against each other. We have our card periods, but at the end of the day it’s playing football.

Connor Hughes, SNY: You mentioned Max (Mitchell) is playing pretty well right now. Monday night, Evan Neal – highly touted first round pick – struggled quite a bit.  Max hasn’t, and he’s not a highly touted player. You guys got him a little later in the draft. How has he been able to acclimate himself and what did you guys see out of him coming out?

You saw a lot of athleticism, but you just weren’t sure from a technical standpoint how he would respond coming from where he came from. It’s just a different world. To our surprise, he’s taken on, from a technique standpoint, he’s a lot stronger than we’d thought he’d be, and he’s only going to get stronger. I mean, I said it in training camp, he’s a lot further along than we thought he’d be and he’s going to be a very good player for a very long time. Sometimes, they slip. It’s hard to evaluate o-linemen nowadays with the way college offenses are constructed, but luckily for us, he’s going to be a good one.

Optimistically, you think everyone you draft and get undrafted is going to be a long-term starter. Initially, you thought it would take a year, maybe two, to get his feet under him with regards to technique and strength. He’s been ascending at a rapid level, which is pretty cool.

Rich Cimini, ESPN.com: The Steelers pass rush hasn’t been the same since (T.J.) Watt went out, but yet, they’re known for exotic pressure packages they throw at quarterbacks. How much of a challenge is it for a guy like Zach, who obviously hasn’t seen a lot?

Antwan Staley, New York Daily News: What happened with George Fant? I mean I know you said on Monday that he wasn’t a candidate to go on IR and he was placed on IR on Tuesday?

I don’t know if those were my exact words, but maybe they were. I don’t remember, but just going through it, visiting with doctors, as part of the evaluation process, they felt like it would be best for him to just kind of spend these next few weeks just to rehab and get off the knee and give it a chance to kind of get back his strength, so per the recommendations of the doctors that’s what we went with.

Connor Hughes, SNY: With Duane Brown, he looked like he was going through it pretty good in the pregame warm-up on Sunday. Is he close? Is he somebody you think once he is eligible to come off the IR, he will be off IR and in the lineup?

Again, it’s going to come down to the doctors. He is working his tail off. He feels really good. He’s saying all the right things. He’s pushing the limits of his rehab and all that stuff and next week, we get him out in practice, and then from there, we will take it per the recommendation of the doctors and see where he goes and keep it day-to-day from there.

Zack Rosenblatt, The Athletic: You guys signed a few veteran offensive linemen this week, would you anticipate them being able to help out on Sunday? Or is it kind of you have to ease them into it?

We’ll see. They are two guys that have played a lot of football, right? They’ve played a lot of games, obviously, Big Ced (Cedric Ogbuehi) is a former first round pick, (Mike) Remmers has played a lot of playoff games. They’re experienced guys. They know how to play the game. So, whether it’s this week or weeks to come, they’re going to end up helping us out in one fashion or another. So, really excited to add them to the group.

He’s progressing just fine. He’s an explosive player, gets the ball in his hands and does a lot of good things. Between him and Michael Carter, we feel like we’ve got a pretty good one-two punch in that backfield.

Brian Costello, New York Post: What is the loss of Quincy (Williams) and who steps into that?

Kwon (Alexander) being here, Marcell Harris, both very comfortable with those guys being able to play, and we’ll see how this week goes. He’s been playing really well, Quincy’s been playing really well. He’s an explosive player, still a very young player, and still raw and learning through the game and felt like he was getting a lot better. So thankfully, we hope that this isn’t very long-term, but at the same time with Quincy, we feel very comfortable with the group that we have to be able to step in and not skip a beat.

Al Iannazzone, Newsday: We know Zach (Wilson) is the future of the organization, you said that many times, what gives you the confidence and what do you need to see from him, maybe not one game, but going forward?

For him, it’s just getting better every day. He attacks every day the way you want him to. He sees the game the right way. He talks about it the right way, he asks the right questions and for him, it’s, again, for our entire team, not just him, it’s going to come down to confidence and you gain confidence by preparation and just stepping on the football field and getting opportunities to make plays and making things happen, and creating a good rapport with your receivers, and your backs, and your tight ends. You just love everything about him, so there’s a lot of faith in him and being able to be the guy and now it’s just a matter of just going out there and doing it.