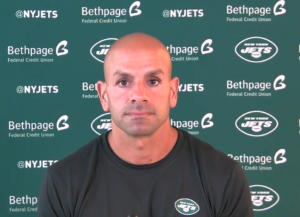 Brian Costello, New York Post: Robert, do you have any injury updates? Elijah (Moore), does he have a concussion?

So, Elijah is in the concussion protocol and, same thing, we’re day to day with Tyler (Kroft) with regards to his chest.

Brian Costello, New York Post: Robert, what was your message to the team today, a day after, and watching the film and kind of having time to absorb it?

It’s the same thing. This league is about precision, Coz. When you get to game day, being off that much can exacerbate an explosive, you can look really, really bad. You trust in the week of preparation, trusting everything that you’re putting into it and then just taking it to the football field and just letting it loose. It’s a young group and it’s just got to find a way to let it loose and trust your preparation.

Connor Hughes, The Athletic: Robert, is there anything you can do to try to help Mike (LaFleur) out at all? Because it seems he and the offense in general are struggling a little bit?

Can you elaborate more on the question though?

(follow up) Yeah, it seems like the offense obviously is in a rut. I know there’s questionable, at times, play calling. Is there anything, I mean he’s a first-year play caller, he’s never called plays in the NFL before. Is there anything you can do to help him at all get this going?

We talk every day. We talk about just the overall look of the offense. What are you trying to achieve there? What are you trying to achieve with on a play-to-play basis? Obviously, any time a play doesn’t work it’s a bad call. It is what it is. If some of those plays worked, if we connect on some of those check downs, if we protect a little bit better, then everyone’s celebrating the play caller. You go back, you don’t want to make any rash decisions, you’re going to study the tape and pour it over for the last six or eight hours. If it’s play calling, it’s play calling, we’re not afraid to admit that either. But at the same time, we’re three games in and it’s round one of a 15-round fight. It’s not like our faces our broken or anything, we just got to continue to work and try to find a way to get better.

DJ Bien-Aime, New York Daily News: Robert, through the first few games, Zach Wilson, throws the ball under three seconds, he’s been able to have a lot of success, a lot of efficiency, but the second he has to hold it a little bit longer, that’s when the sacks start to pile on. So, what can the offense do to, I guess, when he has to hold the ball a little bit longer, have more success in those situations?

That’s everybody. So, from route running to protection, all of it. I think it was on Sunday Night Football last night, they flashed a stat of Aaron Rodgers getting rid of the ball in less than 2.5 (seconds), it was like 11-11 for over 180 yards. But that’s all part of timing and rhythm, getting your back foot, getting rid of the ball, trusting in what you see, trusting in your teammates, get it to your teammates in space so they can make plays. Those are things that he’s getting better at. Obviously, there are some good plays that we take from yesterday, but there are also a lot of teachable moments in terms of, once you hitch in this league, from a defensive perspective, we tell our d-line it’s mandatory, when the quarterback hitches, he better smell your breath. If he takes two hitches, he better be on the ground. That’s league-wide talk. So, for the quarterback to understand that two hitches is asking a lot of your protection. He’ll start to learn, and he’ll start to figure out that he’s got to be able to access the check downs a little bit quicker and he’s got to access those outlets a little bit quicker. He had some good moments in the game, he’s just got to do that at a higher level and be a little bit more consistent.

Connor Hughes, The Athletic: Robert, it wasn’t, obviously we didn’t have the luxury of watching practice film back during OTAs and minicamp and training camp, but the one thing that Zach seemed to do then was he was very decisive in throwing. Like the ball was out of his hand quick. It seemed like once he saw what he wanted he went there. Have you sensed at all that maybe some of the early hits that he’s taken in some of these games, or the way things went in that New England one, is that causing him to maybe hitch a little bit more than what he was during the offseason program and summer?

OTAs, training camp, new system, we’re trying to, were very basic from an installation standpoint. Now you’re getting into the nuts and bolts of the team’s game plan so, there’s a little bit more complexity, there’s a little bit more cat and mouse, you’re also not scripting to put yourself in good positions to make the right read so, you’re kind of adjusting on the fly. The difficulty level is amplified tenfold in terms of being able to process the play call and you have no idea what’s happening and to be able to just trust that, “Alright, I took my hitch, a big hitch, I got to get rid of the ball.” He is going through a learning curve, for sure, and he is getting better with it. To answer your question, it was a lot easier in OTAs and training camp to make those quick decisions because everything is set up for those decisions.

That’s all feel and timing, DJ. When you hitch your back foot and you take a hitch, take another hitch and you really want your guy to get open. But as a quarterback, at the same time, and again I want to make sure I say this right, everyone is collective in this. It’s not the quarterback’s job to just starting being Checkdown Charlie, but if he does take that hitch and the route isn’t working the way he wants it to be, he’s got to progress. For the quarterback, everything is about footwork and progression, footwork, progression, footwork, progression. When his footwork is clean and he progresses in the route, he’s, I mean you can see why he was the number two pick, and we think he’s going to have an unbelievable future. He’s just got to gain more consistency and trust what he sees, progress, get the ball where it needs to go and be satisfied. The biggest thing you see, DJ, with him is the kid is such a competitive dude. I’m talking ultra-competitive. Wants to make every single play on Sunday. You can see him just down there, not pressing, but he wants to make that big throw and it’s like, sometimes it’s okay to say no to the big one for the little one and vice versa.

Connor Hughes, The Athletic: Zach had said to us yesterday how this is, what you guys have gone through these first three weeks, this isn’t something that he’s necessarily experienced in college. So, for a guy that’s used to not having his way with the defense, but a guy that’s used to having success on the field to not be going through a rut like this. I mean, how do you keep him locked in and keep him not getting down on himself?

That’s everybody, right? I just made the comment, as well as one of the 15-round fighting, Connor, and we don’t have any cuts yet, we’re not bleeding, we got a kidney punch, we got the wind knocked out of us, but we’ll get our wind back. He’s got to be able to see that some of the stuff he’s doing and just it’s a lot of affirmations, what he’s doing and the way he’s prepping, the things he’s going through and it’s all good. It’s just piecing it together on Sunday and trusting your week’s worth of preparation and just staying the course, work on your footwork, work on your eye placement, work on progressing routes, your drop-back game and obviously for everyone else is same thing. Be precise in what you’re doing, be accountable, be reliable, protection, route running, all of it. Play calling. It will get better, I know it will.

Brian Costello, New York Post: Robert, you’ve referenced a few times to us that most games in the NFL come down to the fourth quarter, come down to one possession. That hasn’t been the case for you the last two weeks. I know you expected some growing pains and some hiccups, but have you been disappointed at how lop-sided these games have been in these last two weeks?

You know, I wasn’t as disappointed with New England, because I felt like New England, we did very well, it was just turning the ball over. Just even in that, despite three turnovers, it was 13-3 at half-time. We still had a chance to, even in that third quarter I was like, ‘Shoot, we’re moving the ball, let’s just piece it together.’ It never felt like it was a blowout. Yesterday was disappointing because you do want these opportunity to be in the fourth quarter to see if we can make the plays and all that stuff. We just didn’t materialize and it happens to the best teams in the league. Green Bay is a championship roster and they lost 38-3 to New Orleans so sometimes you just get punched in the mouth. But, how you pick yourself up and how you get back to work on Monday and throughout the week and prepare yourself for next week is all that matters.

Brian Costello, New York Post: Robert, with Elijah (Moore), you know concussion you’re not usually back in a week so I’m presuming he’s probably going to be out this week? Will that affect Denzel’s (Mims) status this week?

With (Moore) and Jamison (Crowder) being up in the air, for sure. Obviously, we’ve got Denzel, trying to keep mentioning him for a role to see if he can get on the field and produce.