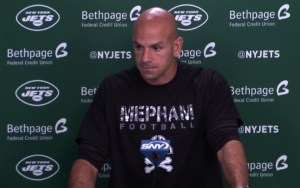 Brian Costello, New York Post: Robert, over the spring, I think it was mainly the spring, we were asking these questions about the identity of the team. You always had the answer of, “I won’t know until we hit adversity.” Here we are. You’re 0-2, Zach had a rough game. You think you’re going to learn something about this team Sunday?

Yeah, it’s not a be all, end all game. But every time you step on the field, you’re creating your identity, you’re establishing who you are. Right now, these guys have shown resolve, they’ve shown to be able to bounce back and to take coaching and to be engaged and to ask questions, so that hasn’t stopped. You’re seeing a group of men that have shown no signs of quit and, we shouldn’t, it’s our first two games of the year. Yeah, the deeper we get, the more the identity is going to shape itself and our style and the way we respond to negative things.

Dan Leberfeld, Jets Confidential: In the first game you guys struggled a little bit with games and twists from their front seven, in terms of your offensive line. How much did it improve in Week Two and how much of a challenge will that be against Vic Fangio this week?

Same thing. Coach Belichick, his scheme is always one of the most challenging when it comes to those twists and games, they’ve mastered it. For our offense to take the step that they did in the second game was very impressive. First game, people are taking notice with how good Carolina is on defense, so it was a challenge. But to respond and play the way the o-line did in the second game was encouraging. Now, it’s having to stack up good days and do it again against another opponent with another defensive mind that’s capable of making life hard.

Brian Costello, New York Post: What’s your opinion, just on the emphasis on the taunting rule this year?

Lot of respect for it in regard to, when the whistle blows, have respect for your opinion. Call it old school, whatever you want to call it, there’s a regard for the opponent that you’re playing, and you expect that same regard. In between, when the play’s rolling it’s, yeah, win your one-on-ones, but when that whistle blows just have intensity but have intensity with your teammates.

Mark Sanchez, New York Post: Robert, the Broncos have three sacks, they’re all by Von Miller. Is he the type of guy that you have to scheme specifically against so that he doesn’t beat you?

Dan Leberfeld, Jets Confidential: How big a challenge will the stadium air now with fans be for your offensive line and your young quarterback in terms of communicating in a very loud road venue?

Yeah, they’re 2-0. Both their games were on the road, so I’m sure fans are just chomping at the bit. They haven’t been in the stadium in forever with regards to referencing COVID. I’m sure it’s going to be loud, but at the same time, we’ve already went to Carolina, we’ve already gotten that experience with loud stadiums. It was pretty loud over there, too. So again, trust in your preparation, trust the cadence system and just go execute.

DJ Bien-Aime, New York Daily News: Robert, the Broncos, according to some statistics, they run zone about 70 percent of the time. Obviously, the Patriots are more man heavy, so, how much of a challenge would that be for Zach knowing that when they drop in the zone and things of that nature?

What’s good about it for Zach is that he’s seeing how the league is. Even though it’s, everyone says it’s a copycat league, people still have their own personality and how they play defense and how teams play offense. Just with regards to Zach, is how can he evolve his game week-to-week, to play quarterback and to take care of the football, but still be aggressive while being smart. It’s an art form and not an art form that’s easy to master, but we’ve got all the faith in the world that Zach’s going to figure that out.

Brian Costello, New York Post: Have you sensed from Zach that he’s kind of dying to get back out there?

I think we all are, I know I am. When you play, call it a biased look at the film, it felt like we played a really good brand of football. We just turned it over four times, which in the history of football you’ll never win. But I think I speak for the entire organization what we’re just chopping at the bit to get back on the football field and try to showcase who we are.

Ralph Vacchiano, SNY: Has Crowder missed too much time to just jump right back in if he shows he’s healthy enough or do you have to kind of ease him back in regardless?

All of it is part of an ease in, with how he trains and all that. From a conditioning standpoint, he’ll be fine, but from a schematic standpoint, he knows his scheme like the back of his hand. He executed it in Washington, he’s been here long enough, he’s a veteran, so he’ll be fine. When he’s ready to roll, he’ll be able to jump right in.

Brian Costello, New York Post: Robert, with the way you guys attack on defense, with like Carolina who even had cut and thrown some screens at you, to try and counter that, what’s the teaching point? Are you telling these guys to be aggressive but then they’re kind of using that against you?

So, you guys, for hopefully the next 20 years will be talking about screens because that’s what teams will do and we understand that’s what teams will do and defending screens is about effort, getting guys running out the stack and setting edges to get it closer to those guys running out the stack. That will never change. And the better we are up front, the more screens we’ll see and the more screens you throw, the more we’ll smile at the fact that we don’t have to play football, we just need to run to the ball. So, it’s part of the system, it’s part of the issues, one that we’re very well aware of and one we’re excited to defend.

Brian Heyman, Newsday: In regard to your shirt, what do you think of the girl’s achievement? First TD, Long Island.

Cool, right? Mepham High School, and the young lady’s name is Sofia LaSpina, she’s a junior wide receiver, scored the first ever Varsity touch down in Long Island history. So I thought that was pretty cool, and I know the organization, correct me if I’m wrong, is going to be inviting her to our next home game. So, hopefully she’s there screaming.

Game time decision, we’ll see how it all works. But I’m pumped for Denzel and the week he’s had. Obviously, he’s growing just like the rest of the team is, so, we’ll see on Sunday.

Brian Costello, New York Post: Did you hear from your mother?

First off, I want to say sorry Mom, I didn’t mean to hurt your feelings. She’s the best, she’s always been my biggest fan, but she’s a concerned mom like everyone else, every other mother in the world. So, well warranted.

DJ Bien-Aime, New York Daily News: From a passing standpoint, the Broncos, they only blitz about, I think 20% of the time, like 25th least in the NFL. So, what’s the adjustment in that, when you know a team isn’t going to really blitz you like that, they’re going to just try to get you with three?

Their pass rush is really good. When we were in San Fran in 2019, you had an unbelievable front forward, I don’t think we blitzed very much, we didn’t. The following year we had to mix it in. But Vic, being with him as a QC and really adopting some of his philosophy is like, the best way to play defense is with four rushing the passer. And, that’s always been his philosophy, that’s when they play at their highest level. Not to say that he won’t pressure and simulate pressure and still try to create four-man rush with eight in the back, and all that stuff, but it’s going to be exciting to see how he attacks our offense and how we adjust to it.