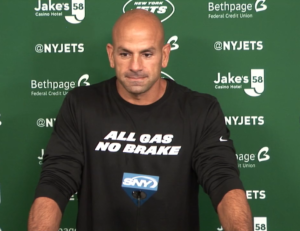 Rich Cimini, ESPN: Can you update us on (Jamison) Crowder?

Crowder is dealing with a groin, and is day-to-day as he gets evaluated.

Andy Vasquez, The Record: Joe (Douglas) said that he’d reevaluate him on Monday. Is there any concern about week one at this point?

Not right now, no.

Kim Jones, NFL Network: Robert, was there a moment during training camp where Zach (Wilson) did something and you said, “Yup, that’s our guy?”

I think he did it, started at rookie minicamp and then OTAs, he always makes a throw or two in every practice where it’s like, ‘Okay.’ I’ve said it a million times, his most impressive moments are off the field when he’s in those meeting rooms and the questions he asks and how he goes through walkthrough. For him, he does make those “wow” throws and all that but, that’s not even close to what we think makes him special.

Kim Jones, NFL Network: I think someone in here, I’m not sure who it was, I’m sorry about that, reported that his guys are like defensive coaches to inquire about scheme and that sort of thing. Is that at all unusual in here for a rookie to be doing?

I would think so, no one ever came to talk to me but, I’m trying to think, we didn’t really have a rookie either. Just the way he goes about his process has been pretty impressive. I would imagine it’s not unusual, but for him to have that process and all that stuff, it is pretty impressive.

Mark Cannizzaro, New York Post: Robert, a definite theme this camp has been your youth in this secondary, obviously, your whole team is pretty young but, what are the challenges going to be, you’re going into the game a week and change from now, do you even know who you’re starting cornerback is going to be on the other side, at this point? Are you still sorting that out and what’s that challenge?

The challenge with a rookie is, from a coaching staff standpoint, is can we keep him ahead of the game? Can we get them exposed to the things that are going to happen to them before they actually happen? So, the thing that, as coaches, we take pride in is to avoid un-scouted looks, it’s what we call them. Where, it happens on gameday and, boom, it’s the first time they see it. So, we try to stay ahead of the curve and make sure we get as many scouted looks as possible and that’s the biggest challenge because, with a rookie, they haven’t seen anything, where a veteran has seen mostly everything, so you’re able to eliminate as much of those un-scouted looks as possible. That would be the challenge. As far as the starting corner, that’s going to be decided later on, next week.

(follow up) How do you do that in practice, what’s the challenge there?

You got walkthroughs, you got group install, you got team reps, you got film, you got as many opportunities as you can create. In this situation, dealing with the Carolina, we’ve got, yesterday, today and then all of next week also.

Rich Cimini, ESPN: Have you had a chance to meet with Rueben Foster yet, and what’s the level of interest?

Andy Vasquez, The Record: Have you made a decision at right tackle yet and are you ready to reveal it?

Not yet, there’s still some things going on with the offensive line that we got to get cleaned up and, as we get closer to gameday, we’ll reveal it.

(follow up) How important is it for those guys once you have established the starters to build chemistry or are you comfortable with what they’ve built in the preseason.

I’m comfortable with what they’ve built, obviously, continuity in every group, especially when you’re dealing with more than two people, secondary, linebackers, o-line, receiver and quarterback, that continuity is always very, very important. We feel comfortable with where it’s at and we don’t feel pressure to have to make a decision until closer to gameday.

Rich Cimini, ESPN: Robert, Joe mentioned yesterday that there was an interest in bringing back James Morgan to the practice squad. What are your thoughts on him choosing another practice squad, Carolina, as your first opponent?

(follow up) Is it disappointing in a sense because you guys invested a year-plus in him and he basically took a lateral move, it’s not like he’s going to their 53?

It is, but at the same time, we made the decision too, right? So, for sure we’d want to bring him back but, at the same time, he might say, “I want another opportunity.” We have a young quarterback that we’re committed to for the long haul where, obviously, with Carolina, Sam (Darnold) is there and, obviously, Sam is going to get his first chance but, there’s an opportunity to grow in those positions. However he saw that to benefit himself is what’s most important and for him to take advantage of those opportunities and grow, that’s what’s most important.

Andy Vasquez, The Record: From a competitive standpoint, he’s obviously been here for the last, however long, you guys are playing him Week One. Is that something you have to factor in as you prepare for him?

No. Teams do it all the time. I don’t know if it’s something we’d ever do, but at the same time, I know the people at Carolina and I’m sure they’re genuine and sincere and giving him an opportunity to show that he’s a good quarterback and that he belongs in this league, rather than using him for something they can see on tape.

Mark Cannizzaro, New York Post: Robert, what have you seen in Marcus Maye this summer, and what are some of the things you’ve learned about him as you’ve gotten to know him?

Everything that people have said. He’s an incredible worker, he’s smart, he’s a great leader, he’s got a lot of energy and juice on the football field. Everything that we were told when we got in here. We’re excited to have him in the system. We’re excited for him to get in a rhythm and see where he can take this season.

Especially with the youth, him, and C.J. Mosley and when we can get Lamarcus Joyner back, they’re vital to the group because they’re flanked by rookies. Then obviously, Bryce (Hall) is a second-year player. Having those three as veteran voices to make sure that we’re all aligning exactly where we need to be is going to be very beneficial.

(follow up) What’s your level of being impressed, for lack of a better term? He obviously came into this camp looking for a long-term deal, didn’t work out yet, he’s kind of put that behind him at the moment, and what’s your level of respect there for that area?

It’s a lot of respect because it is hard. There still is, I’m sure he wants more. The greatest challenge to all people is whether or not you can compartmentalize the things you have control over and the things you don’t. Right now, what he’s got control over is dominating the year 2021 on the football field and letting his contract take care of itself in ‘22. The fact that he’s been able to do that, and he’s put in the work that he’s put in, there’s no doubt he’s going to kick butt. We’re excited that he’s where he’s at.

Kim Jones, NFL Network: Robert, when you look at your roster, a young developing roster, was it particularly important to you to get coaches who are also great teachers?

Whether it’s a veteran group or a young group, it’s always most important to get teachers. It’s like I’ve said before, it doesn’t matter to me whether you’re a rookie or a veteran, and maybe I’m wrong, maybe somebody will correct me one day. But I really believe wherever you are in your career as a player, I believe all they want from you is sincerity in terms of genuinely caring for their well-being, and two, can you help them make plays on Sunday? Which is putting them in position to go make plays on Sunday because that’s where you can make the most money. And so, having teachers, whether you’re a veteran or not, rookie or not, is always the most important and we feel like we’ve done a really good job putting together a staff of great teachers.

Bob Glauber, Newsday: Could you describe your level of interest in Foster and how mindful are you of the previous off-field issues that have been with him?

Obviously, I know Reuben and bringing him out here for a workout is exactly what it is, it’s a workout, and the level of interest will be judged based on that workout. It’s nothing more, nothing less.

(follow up) How about the other factors from what happened off the field?

Like I said, I know him personally, and I can assure you that we would never bring somebody to this organization who we didn’t think would represent it the right way.

Andy Vasquez, The Record: One of the things Connor McGovern said about Zach Wilson is that, from what he’s noticed so far in the preseason, he seems to be kind of a gamer, a guy who turns it on when the lights are on. Have you seen any of that? And how encouraging or what could that mean moving forward to the regular season?

You know, Zach, when everyone sees him at practice, it’s the same thing that you guys saw at OTAs and Training Camp, the kid is going to try some stuff that necessarily wouldn’t try in a game. you saw it in the game, where he took what defenses gave, and you can say it was vanilla or not, but he was cognizant enough to make sure the ball went to where it needed to go. Does it mean he’s not going to make mistakes? We all do. But at the same time, I think he is very, very smart in terms of getting the ball where it needs to go and being very, very cognizant of the fact that he needs to take care of the ball, which is why I think he probably got that type of praise from Connor.

Kim Jones, NFL Network: Robert, is there also a chance, though, that Zach ends up doing something in a game that you’ve never seen on the practice field because his talent just takes him that way?

I think so. All the great ones are capable of “wow” moments in the game. The one thing that Zach is able to do is improvise, everyone knows that from his college game. And when you improvise, God knows what will happen, but we trust it’s going to be pretty cool.

Mark Sanchez, New York Post: We’re talking with (Matt) Cavanaugh later, just what appealed to you about his working with Zach?

His experience, his knowledge. Just like, God rest his soul, Knapper (Greg Knapp), but he just has that same presence, that same knowledge, that same calm, not only for Zach, but for Mike (LaFleur). So he’s a tremendous asset.