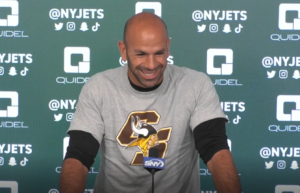 Antwan Staley, New York Daily News: Can you give us an update on Jordan Whitehead?

Yeah, (he) came out to practice. He looked good. He’s going to try to give it a go. So, it’s really encouraging. He’s fighting through it, so it’s pretty cool.

He’s going to be all the way up until gameday. Just working with a hammy.

Antwon Stanley, New York Daily News: After looking at the Cleveland Browns this week, what’s your assessment and thoughts going into this game?

Offensively, their o-line is very good. They have, arguably, the best one, two punch at running back between (Nick) Chubb and (Kareem) Hunt. They’re good at the skill spots. Bill Callahan and (Kevin) Stefanski, they do as good of a job as anyone with regards to creating issues in the run game. So, they’re very talented there. Defensively, they are fast, they’re physical, their front is a problem. They have done a really, really nice job schematically. Joe Woods, being together from San Francisco, Myles Garrett and (Jadeveon) Clowney are hard to deal with. Their linebackers are fast, corners are pretty good, really good. This is a very, very good roster. They’ve done a really nice job building it over there and it’s going to be a really great challenge.

Brian Costello, New York Post: When you watch this defense, what do you see?

Yeah, I don’t want to compare them to 2019, but they’re disruptive up front. They’re fast at the intermediate level, and they’re lockdown on the outside. They’re a very, very, very talented group. You could argue they are one of the top-five units in football right now. It’s going to be a great challenge for our team.

Andy Vasquez, NJ Advance Media: For your offensive line, how much does it help to have the experience from last week to go off of?

Anytime we can get our guys together and playing, it’s always valuable, a lot of things we can learn from. Just simple things like knowing where your teammates are down-in, down-out. Anytime we get a chance to play together, it’s going to be valuable.

Dennis Waszak, Associated Press: What makes Myles Garrett so dominant? What is it about him?

I was joking — well, not joking because it is half-true that the good Lord was on his A-game when he built Myles. He doesn’t have a flaw to his game. He’s big. He’s got everything. When he turns it on, he’s impossible to block.

Brian Costello, New York Post: Having Clowney on that other side?

Like I said, Bill Callahan, he’s one of the better ones in football in terms of o-line play and run scheme and creating conflict. Then, you add those two backs who are just tremendously patient, explosive, powerful, violent runners, along with a really good o-line, especially in the interior. They are as talented as you could draw it up. So, we got to bring it. It’s going to take all 11 every play. They’re really good up front.

Brian Costello, New York Post: Did you have the say, Breece (Hall) in his first game, he made a mistake?

Yeah, they’re not trying to make a mistake, they’re not trying to fumble, he’s trying to fight for extra yards, he spins out of it, you just got to remind him this league is different than college. The players are too fast, they’re too smart, they’re too ball focused, so a great lesson for him. There was even one he was just talking about, he saw a crease and big Calais (Campbell) just grabbed him, and he’s like that’s never happened to him before, so it just grabbed him, just to stop and he’s like ‘jeez,’ but for him, it’s just all of these guys, just that lesson, he didn’t realize how strong these guys are, so there’s just a different mindset when you’re trying to hit those creases, where in college he probably would’ve been gone.

So, different, they’re both phenomenal run schemes, one is more deception with the quarterback and adding the element of the quarterback, so you’re always gapped out unless you go zero against Baltimore or play with extremely aggressive safeties, which is what we did last week. This one’s different in the sense that you pretty much know where they’re running, how they’re going to do it, and they don’t care, and it’s a different mentality, which you appreciate as a football coach. They are running the ball, they still have good pass game and all that stuff too, they’ve got great play action, pass system. Now, this one is more direct, but at the same time, they get you running, they move gaps, and it’s a really cool scheme.

Dennis Waszak, Associated Press: Over the last few years, have you seen teams kind of move away from the bell cow back, the Browns are kind of using both of those guys now, which they didn’t do, mixing them in, you guys have done that in San Francisco, have you seen that as a defensive guy going up against the offense?

Yeah, the game is so violent that it’s just hard for these guys to be able to last and carry. Now there are still some out there, Derrick Henry, but you also want these guys to last longer than 27, 28 years old, you want them to have that longevity of getting to 30, 31, 32 years old, be able to still run the ball at a high level. I don’t want to compare it to what baseball does with their pitching sets, and how those things have kind of evolved, but it’s kind of the same concept, you’re trying to elongate these guys and make sure that they’re fresh, it’s an 18 game season, you’re trying to make sure that they’re fresh for those fourth quarters when you really need it and your play makers the most and not that you’re slowing it down, but there’s so many great athletes coming out of college too that you just want to feed them all the rock.

Brian Costello, New York Post: Don’t want to overstate things on September 16th, but there’s always this stat that teams that start out 0-2 have a 10% chance of the playoffs. What’s the sense of urgency after a loss?

To me, the sense of urgency is always going to be high. Week One loss, Week Two, Week Three, doesn’t matter. You are always trying to perform and show that you belong and show that you’re making progress and all that stuff. So, the urgency is always going to be sky high. I’ll argue that those stats were for a 16-game season, we are in a 17-game season, so we’ll see what studies happen, but you never know, the focus is on this one. It’s just finding ways to get better every single day, so that we get the results that we’re looking for.

Brian Costello, New York Post: With CJ, was that out at practice yesterday? Was that a hamstring?

Yeah, he was at practice and just felt something, so we’ll see.

Zach Braziller, New York Post: What did you think of Sauce’s (Gardner) debut?

Dennis Waszak, Associated Press: Yesterday, we were talking to Jeff Ulbrich and he was saying that Kwon is a guy who really unhinges the guys as a team, just kind of lets loose. He also mentioned Will Parks as a guy like that. Why is it important to have those type of guys and when you’re looking at players, is that a trait that you want to bring in?

You love it. There is not a lot of them. So, I use Kwon as an example and I think Fred (Warner) actually talked about it this offseason. They asked him who his best teammate ever was and he talked about Kwon. And I don’t want to speak for Fred, but I think Fred will credit Kwon for the personality that Fred has been able to extract. A lot of guys, you go into these locker rooms and you’re trying to find that person to follow and so, a lot of times you’ll get a guy who wants to be that demonstrative leader, positive energy, and all the stuff that Kwon brings, but they kind of follow the lead of the person in front of them, so Kwon comes in with his legendary mindset and he has just this aura about him and this juice and this love of football that is absolutely contagious and he extracts it out of people and so having those guys scattered throughout the locker room is proving to be highly effective, at least from my experience.

Yeah, so we are honoring Mike Scarpelli as our high school coach of the week, Clarkstown South High School, make sure I get these right, West Nyack, NY. They beat their rival 38-37 on stopping the two-point conversion in a double overtime game, first win of the season. (He) went to school there, graduated in ’92 and he’s been there for over 20 years. Big Jets fan.