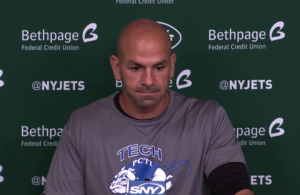 Connor Hughes, The Athletic: Can you go through the injury list?

It’s the same. Obviously, Keelan (Cole) has been added to it, he’s going to go down to the wire with evaluations.

Connor Hughes, The Athletic: I think this kind of completes a week with full practices for Mekhi (Becton). I know we’ve seen from you before is guys kind of tend to have that ramp-up period, do you need that ramp-up period before he starts or do you expect him, after practicing this week, to be a starter for you?

He’ll be fine, the ramp-up period was more for guys who hadn’t been with us, so we have no idea where they are, right? He’s been working out with us, he’s been with our conditioning team, he’s still been here so we know where he’s at and having this week has been good for him.

(follow up) So, you have no worries that he’ll be starting Week One then?

Something we’ll talk about here before the days out.

Brian Costello, New York Post: Do you need a safety with (Sharrod) Neasman down?

As of now, (Sheldrick) Redwine, obviously, is on our active and there’s still a possibility that we could pull up one of the practice squad safeties on gameday.

Brian Heyman, Newsday: With Becton, what are the concerns that he’s missed time, OTA, missed the two weeks, do you worry that he’s starting out behind as we go into this season and, overall, how much of a leap do you expect him to take from last year?

As far as the leap is concerned, that’s always going to be game to game. Yeah, there’s a couple of, he hasn’t practiced, or he’s practiced but he hasn’t played in a couple of weeks. Expecting him to pick up where he left off from Green Bay and, obviously, this first week and every week moving forward getting a little bit better and showcase why he’s the type of left tackle that deserves to be special.

Obviously, he missed OTAs. He’s had his ups and downs, obviously, dealing with Carl (Lawson) which I think a lot of people would. I thought it’s been productive for him, this is a new technique, running off the ball, the pass sets, the protections, it’s all different, where he’s not just running gap schemes and just trying to overpower people, there’s more space that he’s being put in. So, I thought there’s been a lot of production for him and not even worried about him, he’s going to be fine, pass setting is pass setting, so expecting him to be dominant like he has been. From a run game standpoint, he moves people, that’s what he does best. It’s going to be fun to watch him play.

Brian Costello, New York Post: With (Denzel) Mims, we talked a lot about him during training camp. Where is he at now, in your mind, how is he coming through kind of catching up after his missed time?

Same thing with Mims, he’s done a lot better. He had a really nice practice yesterday. So, again, hopefully again stack it up again. It’s the same process, he’s going through some learning curves and working out of a phone booth and working out of those tight splits, the details of route running and all that stuff, so he’s gotten a lot better and he continues to get better every day and I love his intent and the way he’s going about his business, to find versatility and knowing every single spot instead of being stagnant at one, which is difficult for a receiver. So, he’s been good, his mind is in the right spot.

DJ Bien-Aime, New York Daily News: Have you made a decision about who’s going to start on the outside, the replacement of Bless (Austin)?

Dennis Waszak, Associated Press: What did Bryce (Hall) show you through the summer to be one of those guys that could be a starter?

Bryce, he’s the most consistent in the room. He’s very smart, he’s reliable obviously. He’s creative with his alignments, he’s creative with putting his eyes where they need to be. He’s gotten a lot better at his press technique, he’s gotten a lot better in zone recognition, route recognition and all that stuff. He’s going to be in position to make plays and he’s not going to get you beat. We trust that he’s going to be in position to make sure that the ball’s not getting behind him and he’s constantly contesting things that are in front of him. He’s done a really nice job and we’re excited to see him compete this week.

Brian Costello, New York Post: Is Jamison out, Robert? Did you rule him out?

Yeah, from a COVID standpoint, he’ll be out.

Rich Cimini, ESPN: Robert, how big a challenge do Brian Burns at defensive end and Derrick Brown on the inside, how much of a challenge do they present your offensive line?

Their d-line is pretty darn good. Brian Burns is a problem on the edge and then obviously, Brown, I remember evaluating him last year, he’s a very, very talented player, very talented. It’s going to be a challenge. Their defense overall has a ton of speed at every single level and a lot of strength and size on the inside on their defensive line. It is a problem but, it’s a problem that we’re excited to get after.

DJ Bien-Aime, New York Daily News: When you look at (Christian) McCaffrey, what’s the key against him?

Oh man. For him, I always joke with defensive guys, ‘If he sees you, you’re not tackling him.’ So, if he’s out in space and he’s catching a football, make sure you close that space as quickly as possible before he can line you up, because if he can line you up, it’s over, especially in a one-on-one situation. He’s great out of the backfield, he’s great running the football, he’s got tremendous vision, his acceleration, I think what people really take for granted with him is the way he gets 0 to 60, and how fast it happens. You think you have time when he comes out of his break to run it down, make a tackle, but all he does is separate. He’s one of the best players in football and he’s going to be a tremendous challenge.

Brian Costello, New York Post: Robert, with Quinnen (Williams), with all the time he missed, a guy of his size, it’s going to be, I think, 90 degrees on Sunday in Carolina. Do you have to limit his snap count at all?

No, I think he’s chomping at the bit. I don’t know if I want to throw this out there, but I am. Over the course of training camp, he’s lost 10 pounds of body fat, while increasing muscle mass, just because of the foot and catching back up. He’s in fantastic shape, he looks awesome out there, and he cannot wait to get game action. We’re really excited to see him play.

Yeah, we’re going to do this every week. This is PCTI, it’s Passaic County Technical Institute, the Bulldogs. The girls are the first varsity flag football team in history of New Jersey to win a championship. We’re going to recognize a local high school football team every week for doing something pretty cool. So, they’re the first.

Dan Leberfeld, Jets Confidential: Brandin (Echols), the corner you picked late, did he surprise you a little bit? He was sixth round pick, obviously you liked him in the draft, but during the summer he flashed a lot. Was it because he was a JuCo (Junior College) guy, he was a little raw, why did he go so late and what do you like about him?

Why guys go late, I can’t answer that, because it happens every year. And every year, there’s an undrafted free agent that comes out of nowhere. I mean, we watched one last night, Shaq Barrett was an undrafted free agent, who’s one of the best d-ends in all of football. You don’t know why they go undrafted, they just do, you don’t know why guys go late, you trust your process, it happens, you get them in the building and then they ball. But it goes back to what I’ve talked about, with regards to the difference between Player A and Player Z is minimal, and the thing that keeps Player Z from becoming Player A is reps and opportunity. Brandin got an opportunity by being drafted and he’s been getting reps at corner and he’s taking advantage of it, and so are a bunch of other young guys. So, I’m never surprised by it anymore because you never know what you might find, especially, if you’re open minded and continue to work with everybody as if they’re a first-round draft choice, because you never know.

Brian Costello, New York Post: Your pregame ritual that gets so much attention of running the stairs, how’d that start?

I’ve been doing it since I was a GA at my first job. I was looking for something to do pregame when I was still young and in a lot better shape. I was trying to get a workout in, and there’s no workout equipment and I wanted something difficult. So, I started running stadiums in college, and I just started doing it in the NFL when I got here. So, it’s been over 20 years now.