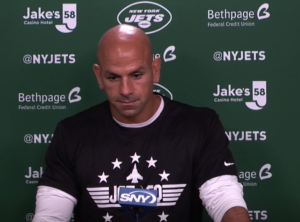 DJ Bien Aime, New York Daily News: So, Robert, there was obviously a big surprise release with Bless Austin. So, what went into that?

You know, very appreciative towards Bless. He’s a good young man, with the youth that we have at corner and with the competition that they’ve all been able to provide and the growth that they’ve all been able to have since OTAs and training camp, we’re going to give those guys a run and give them an opportunity to compete over those the last week and a half and roll with those guys.

Rich Cimini, ESPN: Who gets first crack at that job?

That’s to be determined.

(Follow Up): Would it be fair, I mean, is it Brandin Echols? (Isaiah) Dunn?

Yeah, you can talk about all four of them in terms of Brandin Echols, you’ve got (Jason) Pinnock obviously, Dunn, and (Javelin) Guidry.

Connor Hughes, The Athletic: I remember we had talked to you during camp, and you had mentioned that you want to have, basically, three corners though including the guy in the nickel slot spot. So, is there a point where you do need to say like, “Okay, this is my guy outside,” or do you know who the guy is outside and just kind of keeping it under wraps?

We’re good waiting until the last minute. We kind of have an idea where it’s going to go but at the same time, with that corner spot, it’s about confidence, it’s about being in a rhythm and all that stuff, and so just giving those guys a chance to compete. It’s not pressing.

That one I’ll leave for Joe (Douglas) with regards to his 5:00 meeting, I know he’ll be able to talk about the roster and all that stuff, but it’s a numbers game.

Al Iannazzone, Newsday: Are you concerned, at all, about the inexperience there? I know you said you’d roll with the young guys, but it’s a very young group.

It is a young group, it’s the same thought throughout the roster. We’re probably going to have eight rookies starting or be major, major contributors on this team, nine if you include the kicker. So, challenge accepted in terms of this coaching staff is excited to get their hands on them and you’re going to see a tremendous growth as the year goes on.

Connor Hughes, The Athletic: Have you decided which of your injured players you guys are going to put on the injured reserve with the intent of bringing back?

That’ll be more for Joe, their working through all that stuff.

Again, obviously you guys see the puzzle pieces with regards to there’s going to be tight ends brought in. Joe is working through all of that stuff. An opportunity presented itself and Joe was quick to take advantage of it. I thought, again, Joe’s process is phenomenal, and I thought he did a really nice job over the last couple of days.

Rich Cimini, ESPN: Did Tyler Kroft just beat him out?

I don’t know if beat him out is the word because they all kind of have a specific role with regards to the offense but like I said, there’s an opportunity and Joe took advantage of it and obviously he’s got a lot of things working out and I’ll let him go through it at 5:00.

Connor Hughes, The Athletic: When you mentioned tight ends being brought in, would you guys consider trading for one?

That’s a question for Joe.

Joe Maucieri, WPIX: How do you feel when guys that you let go get picked up on waivers by other teams?

Oh man, you know we had Elijah Campbell picked up by Miami, I believe, and you invest a lot in these young men, and you want to succeed them succeed, but you want to see them succeed in your colors. I wish him the best of luck. I wish all of them, whoever gets claimed, the absolute best of luck but it’s never easy because you feel, ahh, all that time has gone. But it’s not gone because you get to see them go excel.

Brian Costello, New York Post: How many players do you have at practice today because the practice squad is still formulating?

Connor Hughes, The Athletic: You guys were awarded Quincy (Williams) and Tim (Ward) off of the waiver wire. Can you just go through what those two guys bring specifically and how you’d like to use them?

Yeah, so starting with Quincy, just remembering him through the draft and obviously he was in Jacksonville when they were there running a very similar system to ours his first two years. He’s Quinnen’s (Williams) brother. He’s got a tremendous amount of length for his size and he’s extremely fast and violent. To get him back into this system, he’s been injured in his first couple of years with little minor stuff, but to get him in this system where we feel like he belongs, we’re excited about the possibility and the growth we can see out of him. Tim, when you watch his tape, we were watching it yesterday, he’s got freakish ability. He’s long, he’s big, he’s got great bend, he’s got tremendous lower half and so it’s a matter of getting him into our wide nine, our style of play, and see if we can take the harness off him and see what happens.

Rich Cimini, ESPN: It’s unusual in the NFL for teams to go into this season with no experience at quarterback and so with (Zach) Wilson and (Mike) White, you’re obviously in that situation, what gives you the confidence to go that way?

We always talk about things we’ve got control over. What we’ve got control over is to coach our tails off with Zach and Mike and all our faith in them and having the ability to execute at a high level when being called upon. That’s forcing an issue, just to force an issue, I’ve talked about it before, isn’t always the answer either. Especially when Mike is deserving of that number two spot and what he’s been able to do. Like I said, I operate in a world of faith and I trust that good things are going to happen.

DJ Bien-Aime, New York Daily News: The Packers week, I remember Bless (Austin) missed the game because of personal reasons. Did that have any factor into him being released now?

No, if you look at the initial roster, it had eight corners. Normally you don’t keep eight corners, which meant there was deficiencies elsewhere. When we were looking at it, those young guys, they have such tremendous value and there’s so much growth that they can all experience. They all have potential to be high-end starters in this league. It was, like I said, it all comes back to being a numbers game.

Connor Hughes, The Athletic: Robert, this is obviously a young football team, which you’ve mentioned too. You kind of said, there’s going to be the ebbs and flows of dealing with a young football team but, this is a fanbase that really hasn’t seen success since 2015, in the playoffs even longer than that. How do you balance the people that are coming to watch this team wanting to see wins and wanting to see success for the first time in a long time, but also having a young team that’s going to be developing and take some punches throughout the year?

You know, it’s appreciated obviously. We embrace the urgency at which everybody wants to win, but at the same time that can’t affect your decision making for the long haul of the goal of winning championships for extended periods of time. That urgency in the past has led to spurts of success and lengths of failure. We’re trying to get that reversed, to where we have long, long runs of success. So, while the fanbase and all that stuff is greatly appreciated and we want that strain, at the same time it’s not something that’s going to push us to making a mistake that affects the longevity of this organization.

Brian Costello, New York Post: So, do you expect short-term pain this year for long-term gain?

No, not necessarily. There’s a lot of similarities, I’ll let you guys search it out, in terms of teams that have gone the direction we have and have had success. But there’s always, with rookies, and a young team, there’s going to be growth cause there’s going to be so many, “A-ha” moments but, what you’ll see is a group of young men that play their absolute tails off. They’ll run, they’ll hit, and they’ll be excited to play this game.

Confidence is contagious right? But I think it applies to even a veteran, when you have initial success, and you get that confidence, it gets contagious, right? You see it all the time, the teams that won the last three or four games at the end of the regular season are hot and they ride that momentum, like Tampa did last year. No one at mid-season would have thought they were going to win a Super Bowl. You just get hot, and you roll. It’s the same thing, that confidence starts to build, you think you’re invincible. 2017 in San Fran, we started 0-9, lost seven games by three points or less, or something like that. We won our last five games of the year. How does that happen? You win one, Jimmy Garoppolo steps in and then you get confidence and everyone’s excited and then you overwhelm people with juice. It’s the same thing, whether you’re a veteran team or a young team, success breeds confidence, confidence breeds more success.

I think it’s always tough. Because you’re always behind the eight ball, right? You’re undrafted so you have to prove it more than benefit of the doubt. It’s not easy but obviously, it’s not impossible. There are some of the undrafted free agents that will hopefully get back to this practice squad. So, their ride is not over, they’re going to have a chance to continue to grow in their role and who knows, they’ll be able to see the field. But, like I said, right now, it is tough, but it doesn’t mean it’s impossible.