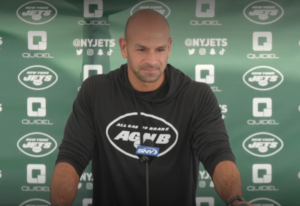 Connor Hughes, SNY: Can you provide an update on Mekhi Becton?

From my understanding, he’s getting a second evaluation and opinion tomorrow, still doesn’t look good. Obviously, all the information is out there for everyone to read. It’s probably the inevitable, but like I’ve said earlier, I’m just sick for Mekhi.

Connor Hughes, SNY: When you say inevitable, you mean this season is likely over?

Zack Rosenblatt, The Athletic: Talking about you’re sick for Mekhi, when guys get injured a lot of the time, they talk about how they can feel like isolated away from the team in rehab and stuff like that. How worried are you for him and going through that again after last year?

You worry about all of them. These are young men, and I think sometimes with social media and this world, we dehumanize these athletes in the worst way imaginable. Mekhi has walked in this building and he’s taking every single punch you can get from every which way and he shows up and works his tail off and he grinds every single day. He shows up to camp and he’s fighting to get himself back in shape. He’s got videos of him vomiting, and people are throwing shade, and he’s limping, and he’s doing all of those different things, and he’s fighting for his family, for himself, for his teammates, for this organization, for this fan base and he’s doing everything. Then everybody wants to drop him like that, a wet rag. That isn’t the case. We love Mekhi, we appreciate everything he’s done, and his ride is not over, his story is not over. He’s got full support of this organization and if you’re a fan that wants to support him, you’re more than welcome, otherwise just keep moving. But, a lot of respect for him and really excited for him to come back even stronger and give himself a chance to show why he was a first-round pick.

Connor Hughes, SNY: Robert, can you please kind of explain because when we saw you yesterday, I know you say you’re optimistic, but you seemed like you were pretty convinced that it wasn’t a problem. Can you take us through, walking off the field, you’re told it’s no big deal and now 24 hours later his season is done?

For sure, we have access to iPads, or not iPads, but the video equipment out there, so you can see the play, so we took a look at that, along with, from a major structural damage, when you’re talking ACL, MCL, the knee was stable, it was strong. They felt really good about that and you look at the video and you’re like ‘okay, worse case looks like this is a sprain’ off of what you see and then you dig deeper and that’s where the MRI comes into play and you find all of the different things that they found with regards to the patella and the knee cap, which doesn’t show in the initial eye test. But initially, and they were right, the ACL is good, the MCL, all that stuff was good, it was just much deeper where you needed to get to all of the different scans to find it. So, initially the prognosis, like we said yesterday, we were optimistic based on all of the initial information, MRI pending, and the deeper it got, the worst it got.

Mark Cannizzaro, The New York Post: Obviously from a business standpoint this stinks a lot, from a coaching standpoint, what goes into what you guys do? You and Mike (LaFleur) and everybody else do? Speaking to the other players, so they’re not heads down because of the offensive line.

It’s tough because they’re a band of brothers and it’s a family. So, when you see a guy who’s, you know it’s very similar to what happened with Carl (Lawson) last year, you spend all offseason with this dude and you’re grinding through camp with this man and it’s over for him. And you’re sick for him. The greatest thing about this sport is that it’s the best sport in all the world, in my opinion, and then you’ve got, if you do it right, you’ve got a chance to feed your families for a long time. The worst part about it is that it is the most violent sport and your career can be over at any one play. I do think that there’s just that little ‘damn’ that happened in my mind, it’s so close to home. But they understand, they know the game, and it’s part of the things we sign up for and it’s tough on all of them, but I think they do a great job, these players are resilient. And like I said they are young, they are super young, and people forget that a lot of these guys are under the age of 25 and are still trying to figure out who they are as people, and with all this added pressure of expectations. We’ve got a great team; we’ve got a great locker room and I think it’s a group that’s going to keep this team together.

Connor Hughes, SNY: Joe said that the wheels were in motion in regard to the Duane Brown signing. Do you have any update on that? What do you know?

Brian Costello, The New York Post: What’s the sense of urgency at the tackle position?

Connor Hughes, SNY: Do you feel fortunate Robert? You know last year you were fortunate in a very bad situation and you were able to find Morgan Moses late. Right now, while the signing isn’t done, there is a player that’s, aside from who you have internally, there’s also a guy who’s a former Pro Bowler, second team All Pro, that’s experienced.

I don’t know if it’s fortunate because you don’t want any of your guys getting hurt ever, and we’ll see, like I said earlier, there’s still a lot of great players on the street. That’s one thing with the NFL, there’s always somebody that can come in and say wow, he surprised us. I’m sure here there’s a lot of history that you guys can think of in the back of your head where a guy came out of nowhere and had a really nice season but like I said, we’ll go one day at a time. The focus right now are the guys who are on our roster and if Joe pulls the trigger on something else, then we’ll focus on that person too.

Stefan Bondy, NY Daily News: Yesterday it seemed like Mekhi got banged up pretty early in practice, but kept going, in retrospect is there something different that should have been done?

No, you know hindsight is always 20/20 and we can play that game for sure. Just from an understanding point, the heat, coming off from an off day, the Green and White game, playing on turf, it was going to take a little while for his knee to get going. This is a completely new injury. I’ll let the doctors get in the detail of all the relation, but I give Mekhi credit for how hard he’s fought, that’s all I can do. I’m proud of him because he’s come a long way, and I know his story’s not over.

Rich Cimini, ESPN.com: Can you confirm that it was fractured?

It is, yeah. So, he’s got a small chip in his kneecap that was from the patella. I feel like I’m batting zero percent on diagnosis’ so I’m going to leave that one for the doctors.

Mark Cannizzaro, New York Post: When you say his career’s not over, I mean obviously you’re a very positive person, but when there’s a guy that big that’s had now two years in a row, is there a concern at all?

I don’t know about that one. I don’t like to think quit, so even if that was even brought up, in my mind it doesn’t exist.

Kevin Maher, News 12 Long Island: What are you seeing from (Jeremy) Ruckert now that you’ve had a few days to see him suit up?

He’s swimming a little bit, obviously there’s a lot of information coming in, he missed all of OTA’s, half of training camp and he’s getting into the thick of it, in the middle of it. Love his movement, love his athleticism, he’s everything we thought he was going to be, now it’s just a matter of him catching up to the play book, so that he can play without thought.

Kevin Maher, News 12 Long Island: What do you tell him about learning from the veteran tight ends that you signed?

Oh man, he’s in a perfect room for a rookie because you’ve got CJ (Uzomah), and you’ve got (Trevon) Wesco in there, and along with (Tyler) Conklin, three unbelievable professionals, so that whole group is pretty cool.

Zack Rosenblatt, The Athletic: One more on Mekhi, what’s his state of mind? Have you talked to him?

I’ve talked to him, I’m not going to speak for him, I can only imagine. I don’t want to speak for him, but like anyone in those situations, there’s a lot of frustrations. You work your tail off to get yourself prepared and ready to play and then this happens on a routine play. So, I’ll let him speak for himself.

Connor Hughes, SNY: I know these two injuries aren’t related, but last year wasn’t there a kneecap issue as well? And this year it’s a knee cap issue as well. The procedure for Mekhi is going to have done, will it stabilize that kneecap, where he should be fine moving forward?

Ethan Sears, New York Post: As far as the readiness of the other guys taking that position, Mitchell, Edoga, just where do you feel they are to start?

Connor Hughes, SNY: I don’t know if this injury changed anything at all, but you mentioned you want to play your starters in the preseason opener. With some of that fluctuation now at right tackle, does that potentially change your thoughts on putting Zach (Wilson) out there?