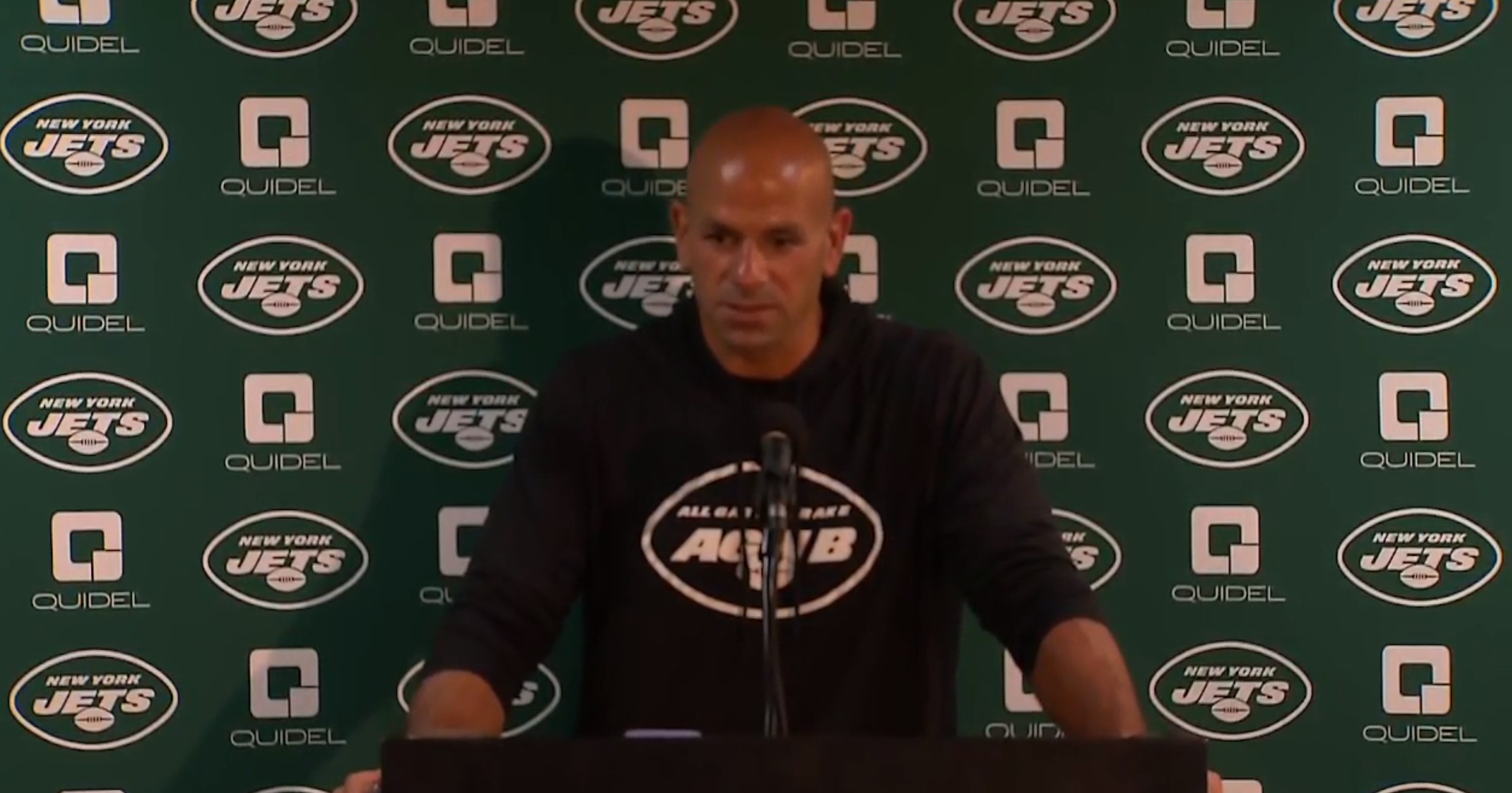 Connor Hughes, SNY: We saw towards the end of practice, I think it was the final two team periods, Mekhi (Becton) wasn’t up there. Was that by design or did something happen?

It’s by design. He was on a pitch count today.

Zack Rosenblatt, The Athletic: D.J. Reed didn’t practice today. Is there any update there?

Yeah, he was dealing with a slight hammy. Everything is checking out pretty good. It was more precaution.

Connor Hughes, SNY: Didn’t he have a hamstring in OTAs?

Al Iannazzone, Newsday: Do you know what happened with Conor (McDermott)?

He’s dealing with an ankle. We’ll get a better look at it tomorrow.

Brian Costello, New York Post: What did you think overall?

I thought it was really good, good competitive scrimmage on both sides of the ball. I thought offense was really good coming out early, good, methodical drives. I thought the defense responded in the second half with some stops. It was really good. It was. It was going back in forth. I can get into more detail into what I saw, but save those for game days, I guess.

Zack Rosenblatt, The Athletic: Seems like the offensive line was giving Zach (Wilson) more time than maybe they had in a couple of recent practices. Do you feel like they are kind of hitting their stride?

Those five got to play together more. With the injuries and trying to ease guys back in, we haven’t been able to get those five together at the same time as much as we like, and the sooner that happens, the more they’ll kind of mesh together and get even tighter. So, today was a good day for those guys, and I anticipate it getting even better.

Al Iannazzone, Newsday: What did you think of Zach today?

I really thought it was really good. He dropped a dime over a buzz defender’s head in the second half there and I thought it was a chance to keep the drive going, had a really good strike there in the two-minute drive. I think it was to Corey (Davis). He moved around in the pocket, found some open lanes to run in and bide some time. He was really good in the huddle, just standing back there listening to him. He was good with cadence because he was changing up his cadence. So, I thought he was really good.

Connor Hughes, SNY: There were a few notable drops from the receivers on the first team from some Zach passes. Is that just a result of rust?

Well, it’s a little bit. I could make excuses. We’re professionals, we got to make plays. But, at the same time, just talking to the guys, the first time you’re in the stadium, the depth perception is much different. So, you have to retrain your eyes for all of that, too. Not to make excuses for them, it’s a real thing and just adjusting to all of it. That’s why we had these scrimmages here. That’s why we have preseason games, so we can get acclimated to everything. Overall, I even thought the receivers battled a lot in man coverage, won some one-on-ones, and overall, a decent day from that group.

Rich Cimini, ESPN.com: We all saw Duane Brown, he’s kind of hard to miss out there. What was the thought on bringing him in for a look?

Any time you have a chance to add a pro-bowler like him and add to the depth of our roster, we’ll look into it. We’re always going to search far and wide and there’s interest on both sides, obviously. And Joe’s (Douglas) been working on that one for a little bit, but we’ll see where everyone’s at with regards to that conversation. We’ll have more conversations about it. Everything else with regards to that would be more for Joe (Douglas).

Brian Costello, New York Post: Is that needed Robert? That backup tackle? Just tonight, Conor (McDermott) goes down and I’m assuming George (Fant) was on the pitch count as well.

Yeah, George was on the pitch count also, yeah.

Brian Costello, New York Post: Mitchell was getting a lot of run with the first team which he might not be ready for. Is that being kind of underscore there?

You can never have enough good O-linemen. You just can’t, especially with the type of offense that we play and all that. But, like I said, any time you have a chance to add a quality player at any position you have to listen, you have to look, you have to try to see how it fits.

Connor Hughes, SNY: You were keeping an eye on him, it looked like. You were over there at one point, Rex (Hogan), Joe (Douglas), Woody (Johnson) was over there, George (Fant). Is there anything else you can do to convince him to come here?

No, you know what, he’s such an established man. There’s history obviously, I was there, I was a little OQC (offensive quality control) in Houston when we drafted him. So, I have a history with Duane, he’s a phenomenal man. I was about to say young man, but he’s a phenomenal man. He’s a massive human being, you guys saw him. It’s nothing more than just paying respect to a man who has done unbelievable things in this league.

Andy Vasquez, The Record: It seemed like you guys were a little cleaner with the pre-snap stuff earlier in camp. There’s been just a few more of that in the last couple of practices. What do you think that is, it just happens as practice goes on?

Well, we got the NFL refs over the past couple of days, so they are a lot more precise in the way that they see the pre-snap stuff and it’s a good awareness, obviously. We push the envelope as far as our alignments as defensive linemen, call it credit card alignment. Usually, you get a warning, just letting it fly, obviously, in practice which is what we wanted. But, a lot of young guys just with formation, it’s a heavy load. But, overall, I’m not overly concerned with pre-snap penalties, at least not yet.

Brian Costello, New York Post: What about defensive holding? It seemed like there was a lot of that tonight.

In the back end? Yeah, it gets grabby. You know, man coverage can get grabby. Especially with how aggressive we play our man coverages. It’s something that we’ll clean up as training camp goes and they get used to what we’re doing.

Zack Rosenblatt, The Athletic: What has Tyler Conklin showed you? He had a pretty busy night with Zach it seemed like.

Mike Kaye, Pro Football Network: When you have the connection that Zach seemingly does with Tyler, from a defensive perspective, why is it so hard to stop?

That’s a good question. When you have, we’re in a good situation. We have a pretty good receiving core with Elijah (Moore) and Garrett (Wilson) and Corey Davis and Mimsy (Denzel Mims) and (Braxton) Berrios and Jeff Smith, it’s a pretty cool group. And then you get that tight end in the middle and he’s, usually if you’re a pretty darn good receiving tight end, you’re probably in a mismatch with either a linebacker, possibly a safety. We play zone defense, so there’s soft spots in the middle of the defense they can find tight ends with pretty easily. There’s a lot of different things, there’s a lot of boots, get it out to the flat. I think in seven-on-seven he had a really cool slot fade where he won the size matchup with, I think it was (Javelin) Guidry. He’s just a versatile guy. He can play in-line, he can play split, he can play off the ball, he can play whatever you want him to play and because of it, you can find mismatches for him.

He was upstairs, yes. LeBooth (Laughter).

Perry Sook, PIX11: Depth perception issues aside, what was your thought of the debut of some of the rookies in the stadium?

It was good. They usually treat it like the Catalina Wine Mixer and they get a little too amped up. You try to teach them that it’s just another opportunity to go play football. Pete Carroll many moons ago said that championship mindsets treat everything like a championship moment. If you have that mindset, you’ll make the great ones look normal and you’ll embarrass the bad ones. You just want to keep that mindset. I thought Garrett did a really nice job, he plays with great energy and anger. Elijah, Corey, Braxton, it’s a really cool skill group and it’s going to continue to get better.