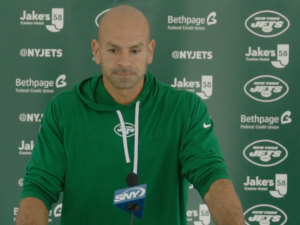 Ryan Dunleavy, New York Post: How’re you guys handling cuts, Robert, have you started yet? Will you wait until Tuesday morning?

Al Iannazzone, Newsday: Is everything on to Carolina now?

For us, yeah. We put the preseason to bed this morning. We’ll have a good practice of just ones and ones. Our offense versus our defense. Then from there, coaches’ attention is all on Carolina.

Ryan Dunleavy, New York Post: Did you get a chuckle at all when the “random” NFL schedule gave you Sam Darnold and the Panthers Week One?

You know, NFL does have a sense of humor, but we’re going to eventually have to play them anyway so, in the long run it didn’t matter.

It’s game-to-game. Whether Carl was there or not, every game is going to present a different opportunity to attack the protections that are presented to us. Having him there, obviously, makes it much easier but, we’ve got to find other ways to do it.

Dennis Waszak, The Associated Press: How does preparation change now that you’re heading into the regular season, as far as in general with the team. Is it more now, game plan specific, you start up, because in training camp there’s a lot of general?

Yeah, after tomorrow, every practice will be geared towards whoever it is we’re playing. We have the off day on Tuesday, which is also the cut down day. When we get back together, every day from there on out will be focused on the opponent.

DJ Bien-Aime, New York Daily News: How much of a balance is it when it comes to game-planning for Carolina? Will it be what you saw in preseason, what you saw from Carolina? Based off what they did with Teddy Bridgewater last year? Are you going to watch some of the film from Sam Darnold last year?

It’s a little bit of everything. There’s stuff that we put on tape that exposes us as a defense. There’s the play caller, there’s Carolina, there’s a lot of different things. The first game is always a crapshoot but, you do the best you can to show guys what may or may not happen and from there a lot of “rule” ball, to be honest with you.

Ryan Dunleavy, New York Post: Does it help that you have internal film of Sam Darnold?

Al Iannazzone, Newsday: Robert, how important is C.J. (Mosley), I know C.J. was always important but, Carl, you got two rookies next to him. How important is he now in this defense?

DJ Bien-Aime, New York Daily News: Have you made a decision on right tackle? If so, who are you going with to start?

We’re still working through it.

Dennis Waszak, The Associated Press: For you now that you’re through training camp. Is there a little bit more, excitement, because now you’re gearing up for the real deal, going into week one?

You know what, its cliché, but I’ve been taking all this in. All of it has been exciting, obviously, the games are the games but, it’s for real now, or whatever you want to call it. Everything’s had meaning though, it doesn’t change the meaning. Maybe the game didn’t count but it mattered, with preseason. Every single day matters and all of its exciting and obviously, we’re going to be a little more amped up for week one but, it doesn’t change how much it matters.

I think so. I feel like over OTAs and training camp as a staff, we’re a young staff too, so we’ve been able to get into a little bit of a rhythm. I’m anticipating a lot of learning moments throughout this entire season. We’ve gotten some great opportunities with regards to game management and reviews, and timeouts, and all that stuff. The difficulty level is only going to amplify once the regular season hits. So, there’s still going to be many more learning opportunities to come.

There’s a lot of personalities. Just having to deal with all of them but, again, we have a tremendous staff and trusting them to do their jobs. Overall, just the amount of different things from personalities and management that has nothing to do with tape is probably the biggest things I’ve learned.

Al Iannazzone, Newsday: We talked to you a couple weeks ago and you said, about which meeting room you’re in the most. Are you more in defense, has anything changed from that standpoint?

Today, I spent time in the offensive room. I got a little convenient deal where I can watch them all from my office so, I don’t want people to coach differently just because I’m in there. I get an opportunity to watch anybody I want so today, I spent a little bit more time with the offense. As game planning goes, obviously, I’m going to lean towards doing my best to help the defense get ready.

There’s a lot of spots that are close and, I know Joe is grinding his butt off to try to find the fine line that determines which ones make it and which ones don’t. As we go through this, these are the hardest parts, the whole hardest part of camp because you know these guys have put everything on the line and you just want them to be successful. There’s a lot of discussions being made between now and tomorrow.

Eric Allen, newyorkjets.com: Potentially, how much of an advantage is it about being so early in the waiver claim order?

It’s like a second draft, right? It’s still a hard thing to do to be able to just claim somebody off another person’s roster because of the amount of work that you’ve put in with your guys. More often than not you trust the work that you’ve put in with your guys and you want to see them evolve, especially with the investment that you’ve already made. The (waiver) wire is a great game to play but, it’s also a lot harder than people realize with regards to claiming people and letting go of somebody that you’ve invested so much in.

Joey Chandler, NJ Advance Media: What are some of the deciding factors you look for when there are those two players that are pretty neck and neck?

It’s just the overall body of work. It can be anything. It could be, do you want to go the younger guy, do you want to stay with a veteran, the character aspect of it. There’s so many different variables that go into each scenario, to pinpoint it to one or two would be a disservice.

Eric Allen, newyorkjets.com: You mentioned (Michael) Carter II at nickel before, how much have you liked his growth? We know he could find the ball collegiately, he seems to be a very physical presence at that position?

Michael and (Javelin) Guidry, both of them, I said it after the game, we’ve got two legitimate starting nickels and we’ve got to find a way to get them both on the football field. Michael has done a great job since he’s walked in here. You can’t ask for much more out of a fifth-round guy. He’s going to have a long life in the NFL for sure.

He’s got to keep progressing, it’s the same thing. Nothing changes in terms of, just like I mentioned from a coaching staff standpoint, he’s going to learn so much as the year goes on. Every game is going to present a different challenge, he’s going to get different looks, they’re not going to be as vanilla. He’s going to see more speed on the field with regards to the defense, he’s going to see every week just being a different scheme. There’s so many different things that are going to happen for him over the course of the year and he’s just got to find ways to absorb the information, find ways to get better, take care of the football and do his best to put us in position to win football games.

Ryan Dunleavy, New York Post: What about the extra week? We’ve normally had a fourth preseason game but it’s an extra week of just 53 guys instead of an extra week of 80 guys, does that change anything that it’s two weeks to prepare with just 53?

It gets you to the Week One opponent a couple days faster than you normally would, that’s about it.

Dennis Waszak, Associated Press: I just wanted to see some injury updates on (La’Mical) Perine, (Brandin) Echols, (Denzel) Mims, (Lamarcus) Joyner, if you have anything.

Joyner will be ready for Week One.

They’re all banged up but, he’ll be ready. They’ll all be good.

Al Iannazzone, Newsday: Mekhi (Becton) is in the protocol, is there any concern about Week One?

We’re not concerned about his Week One availability. For the most part, everyone who has been banged up we’re very, very optimistic about Week One.

Dennis Waszak, Associated Press: Real quick, to go back to Al’s question when he asked about the meetings, you said you can look at the other rooms from your office. Is that something different?

I learned that from Poppa Shanahan (Mike Shanahan) and Kyle (Shanahan). It’s not necessarily to spy but, it’s more of an opportunity to just go in there and just watch and just stay connected without, because what you find is when, in talking to Poppa and Kyle, when the head coach is present in the room, coaches tend to coach differently because they’re trying not to show up guys and embarrass guys in front of the head coach. At the same time, you have those opportunities to record meetings so when you do get people in the building, new players, they have a chance to go watch installs. Not all meetings are recorded but the install ones, just so the players can look back and they can get caught up. There’s a process behind it and I took a liking to it and so, I have to credit those two men.