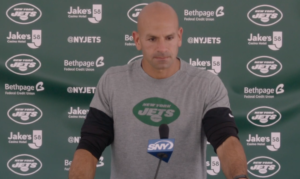 Connor Hughes, The Athletic: Can you provide a little bit of an update on Mekhi (Becton)? It looked like he left a little early.

He had a run-in earlier in practice on a collision so, more precautionary. Just checking his head.

(follow up) He came off the field and was pretty, kind of, sick…

I think it was head-to-head contact so he’s being evaluated.

Echols landed on his hip, so we’re just evaluating him.

Brian Costello, New York Post: How good was it to have Elijah Moore back out there?

It was kind of like Christmas; we had a few guys back. I had Elijah Moore back, Alijah Vera-Tucker came back, Quinnen (Williams) got more reps. It was good to get those guys back in the fold, (Jason) Pinnock made a return today so we’re getting some healthy bodies back.

Al Iannazzone, Newsday: Were these guys on a snap count?

Yeah, we want to ramp them back up into playing shape. I think they were limited to about 10 to 12 reps, all the way through practice. Tomorrow, same thing. We’ll try to build them up to be ready for week one.

That’s something to evaluate, I’m not ready to answer that yet.

Brian Costello, New York Post: Robert, when we talked to Mike LaFleur, I think it was Thursday, in Green Bay, he thought the pass protection hasn’t been where he wanted it for like the last two weeks. Is that something you share, is that a concern right now, your pass protection?

I’ll speak for the entire team, offense, defense, special teams, nothing is where we want it to be. But, and I know that’s what’s going to catch the headline, but that’s part of training camp. We’re building, we’re trying to get ourselves better, we’re working every single day and the reality is, we’ll never be where we want to be. We’re always going to try to improve. It’s a hard. blank statement in terms of not being where we want to be. You can ask me on a 16-0 team, and I’ll tell you we’re still not where we want to be, we’re trying to improve things, we want things to be better, we want to challenge ourselves to find a way to inch and it’s the whole mantra, right, go to bed better than when you woke up. With regards to all of it, and to Mike’s sentiment, absolutely. It can be a lot better, and I think it is getting better.

Connor Hughes, The Athletic: Robert, the one thing thought, I mean, we’ve watched the OTAs, Mini Camp, now throughout training camp, the joints with the Packers and now with the Eagles, the one consistent seems to be this team struggles in pass protection. Zach’s got guys around him a lot. Is that, Mike kind of alluded to that being a concern, is that getting to be a concern for you?

There’s a lot of things that you can do to mitigate a pass rush. We’re doing some third down periods where offense isn’t exactly trying to scheme up protection to create space, they’re not exactly trying to get rid of the ball, they’re working on things. There’s going to be a screen game, there’s going to be a lot of different elements to help protection. There’s the quarterback getting rid of the football. Dropping back in this league, in my opinion, is the hardest thing to do on a play-in and play-out basis. That’s why very few teams do it. You expose your quarterback to the same thing that you’re seeing, the pass rush in this league is so much different than college. People are always around the quarterback and if you sit back and just drop back constantly for 60 plays a game, but if you can work your play-action passes, your run game, your screen game, the little tricks and gadgets that you have, you have a chance to allow your quarterback to give them 15-20 opts to actually drop back, which will mitigate and eliminate some of the pressure that he does get. What’s happening at practice, there’s going to be people around his feet. It is what it is.

Rich Cimini, ESPN: One of the things LaFleur also said, he said, “Mekhi is going through some things and he’s not playing his best right now.” What exactly did he mean by that? What is lacking?

One, he missed all of OTAs. Two, it is a completely different scheme that he’s in, not only run game, but from a protection standpoint. And where he’s used to just getting in front of people and mauling them, we’re asking him to run off the ball and do things a little bit differently than he’s used to. He’s pulling, this outside zone scheme, it’s not just inside zone, maul the guy in front of you because you’re just a big human. We’re trying to extract the athleticism that he has, which he does. And there’s an adjustment that he’s got to go through and obviously, for him, and just like everyone else, Quinnen’s (Williams) out there and these are his first reps, so he’s rusty. But we like where Mekhi is going and we got to continue to build on the positive and keep showing him when he does do it right, harp on that and correct on the times when it’s not.

Connor Hughes, The Athletic: Would it be fair to say it’s an issue then, if he misses some time here with this head injury.

It’s an issue for everybody. The missed reps for everybody is an issue. So, it’s no different from than Vera-Tucker. We’ll see the tape here, but I promise you, it probably wasn’t as good as he wants it to be and it probably showed some rust in there, but at the same time, taking the film, taking it to individual, taking it to your group install, getting your one and ones, and then taking it out to the practice field, that’s why we practice.

No. His weights good, his conditioning’s fine, he’s fine.

Brian Costello, New York Post: Robert, with no fourth preseason game, now, it’s going to be tougher for you guys, making these evaluations of bottom of the roster guys in the next week before cuts. How have you kind of compensated for that, and how do you do this last game in terms of that?

The only difference to me, obviously you’re not getting as much of an evaluation because you’re not getting that fourth preseason game, but the timing is still the same, there’s still that four days after the last game, and then Thursday is the last practice before they get the three days off. So, a lot of that happens, but we’ve just got to do a really good job in practice and recreating as many situations as we can to give them the evaluation that they need. But usually, you get down to that fourth game, usually the second half of the third preseason game, usually reveals a lot of information that you need. So, we’re diligently trying to put these guys in situations, give them opportunities that show that they belong here, and a lot of guys are fighting their tails off. So, we just got to continue that process and continue to be very strong and not getting lost in just scheme and making sure that we’re also evaluating to the best of our ability to give these guys a chance.

DJ Bien-Aime, New York Daily News: Robert, there was a play today where you had a safety come out and blitz, and then during the preseason game, you got some double A-gap blitzes. So what goes into, you know, trying to create that type of confusion for offense? Because obviously, you’re just trying to get confusion.

The whole design is to create protection issues. Obviously, every game will present a different look for us, in terms of how we want to attack a protection, to create one-on-ones and to create a free runner, which very rarely happens anyway. So, some stuff is just our base stuff, and then some stuff will be game plan wise, but all of it is from game-to-game.

Brian Costello, New York Post: Robert, with (Lamarcus) Joyner, you didn’t seem that concerned last week, when you first talked to us about him. But it’s been about a week now since he’s been out. Is he…

I’m still not concerned. He’s going to be fine.

Yeah, he should be ready to go, hopefully get him back next week for game week.

Andy Vasquez, The Record: Where is (Sheldon) Rankins at?

Same thing. He had a lower-extremity deal, but it’s not a concern. If we can get him out there, he would, but I thought it would be best for him to just kind of go through the return the play protocol, but if it were a game, I promise he’d be playing.