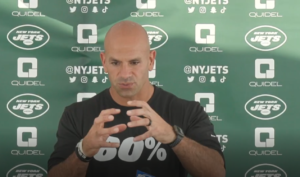 Zack Rosenblatt, The Athletic: Looked like some teams had to be stopped because there was scuffling, do you know what happened there?

Yeah, our defense their offense little skirmish, settled it down, got a productive practice out of it.

Brian Costello: What did you think of the competition between the teams?

I thought team run, that was the part I was with the offense, didn’t see the defense. Breece (Hall) had an explosive run, that was a real rep and thought it was good competition and then obviously, got to the defense the rest of the practice after the skirmishes, again it was both ways in terms of good competitive atmosphere on their side. Arthur (Smith) does a great job over there too. Then, obviously finishing with two minutes with the ball, so a very productive practice, seeing different coverages for our offense, seeing a much more different offensive tempo and shifting a lot of movement from their guys and a lot of personnel, so it’s good for us to get lined up. So, again, it’s exactly what you want it to be. It was very productive and I would assume it was productive for them too, but we got a lot out of it.

I missed all the fun stuff. I heard the crowd yelling or cheering, so that’s a good thing I guess, but I thought he did a really nice job. I thought the two-minute drive there at the end of half situation, thought he did a really nice job got us into a scoring range and it was set back by a holding penalty, so a good lesson to be learned there for the offensive line to hold up, keep it clean. Still got points out of it, which was good.

Eric Allen, New York Jets: How valuable is it for these guys to see unique player hits? In that two minute situation (Michael) Carter made some nice pass breaks.

Rich Cimini, ESPN.com: On injuries, it looked like (Vinny) Curry had something?

We’ll find out, it was late in the down, finishing a play. I think it was his hammy, we’ll check it out, but it came late on that pass rush.

Brian Costello, New York Post: Does Bryce Huff have something?

He’s dealing with an oblique, should be a couple of days.

Henry McKenna, Fox Sports: With Flacco, have you seen him evolve in your offense? I know he’s a competitive veteran, been in the league for a while, an older guy, does he still?

I think so. I think all these guys to survive, you’ve got to evolve. You’ve got to evolve your game. You’ve got to find ways to maximize who you are at that moment. He is a wealth of experience. I mean, you could argue statistically his best year came in this type of a system and obviously this system is a little bit different than what he had back in, I think was 2014 or 2015 or whatever or whenever it was, but really excited to have him. He’s just a very calming effect in the huddle. He’s got great command of the huddle, great command of the line of scrimmage and it’s good to have him.

Al Iannazzone, Newsday: You might have missed some of Elijah Moore’s plays, can you talk about his development, what you see from him?

He comes to work every day, I did catch the, I think it was a 58 yard or some big 50 yarder, on the move the ball, just looking at the corner my eye, but he is a professional. He approaches every single day like a professional, he takes care of his body like a professional, studies like one and again, he’s another guy that’s got great mindset loves football and he hasn’t even sniffed the surface, let alone scratch it, of what we think he’s going to be capable of.

Al Iannazzone, Newsday: What can he be in this offense?

He can be as good as he wants to be. I think our offensive scheme does a really nice job putting players in position to be successful. It’s the moment of truth, the catch point to be able to take the ball and transition and make something explosive happen and we all think he’s got that in him.

Brian Costello, New York Post: How do you feel overall with that receiver group?

We feel really good about it. It is a young group. I know Corey (Davis) is there and I know Braxton (Berrios) and then they’re sandwiched with two young guys with Elijah (Moore) and Garrett (Wilson) and they’re still trying to find their way. Then, you have (Denzil) Mims coming along, Jeff Smith and so, it is a really good group. It’s a young group that’s has to learn how to play with one another and really elevate their game from, just like I said earlier, the moment of truth, it’s doing their job, running the routes, creating separation, not a problem with this group. It’s going to be the moment of truth – catch the ball and make something happen, yards after catch, explosive plays, and what you do with the ball in your hands and that’s something that they’re building towards and they’ll continue to get better at it.

Mark Cannizzaro, New York Post: Back to Moore, what are the tangible things that he’s improved on compared to last year as a rookie?

At this point a year ago, he’s swimming, right? There’s just a lot of playbook on him, so this year, much less of that, where he’s lined up, he’s running his routes. He knows exactly what he needs to do. It’s not 100%. Some things can be a lot cleaner in terms of his relationship and the trust level with him and the quarterback, where the quarterback is trying to put the ball versus he’s running his route, but he’s much further along and like I said, a second ago, he still has a long way to go too, but love the progression that he’s on, love where he’s going and love where he’s going to go.

Al Iannazzone, Newsday: Elijah Riley in the play at the end there, you guys had him last year. What have you seen this year and what do you see as his football future because it’s obviously a numbers game?

We have a really cool safety group. He’s picked up where he’s left off. He’s very instinctive. He’s very smart, great communicator. He’s very detailed in his assignments and obviously, I have a lot of respect for Elijah and his style of play. Again, it’s a really good safety group too, he’s out there, he’s making plays every day, he’s not losing the down because of things that he’s got control over, so he’s always in position to make the plays that he needs to make. He does it because of his approach to the game day in and day out.

Brian Costello, New York Post: When you first got here, the receiver room, was that a priority just since you’ve been here? You’ve added Corey, you Elijah, you draft Garrett (Wilson). Is that something that you identified as needing to elevate that room?

For sure, you’re really trying to elevate everybody, not to marginalize it, but they’re the ones who touch the ball. The backs touch the ball, the quarterback touches the ball, the receivers touch the ball, and if you don’t have explosive playmakers at those positions, guys who can take those five, six, seven, eight yard routes and turn them into 20 and 25 and 30 (yards), then you’re having to spend 10 to 15 plays trying to score points, which is very hard to do in this league. You’ve got to be able to have five, six, seven play scoring drives, you’ve got to be able to move the ball quick, you’ve got to get chunk yardage and we feel like we’ve built a group of receivers that are capable of that, and now they have to go make it happen.

Henry McKenna, Fox Sports: I think you said you missed red zone for the offense, but Garrett Wilson was pretty effective there.

I saw that one, seven on seven early. Yeah, that was good. Those guys, everyone getting their feet wet trying to feel one another another out. Garrett, he’s got elite body control and hands. The dude just has freakish route running ability with what he can do to his body when trying to shake receivers. The things that he’s got to do, he has to get stronger and he has to understand that all that work at the line of scrimmage, you only have so much time, so he has to go faster, things that he’ll learn, but love is mindset, love the way he approaches every day and he’s going to be a good one for sure. It’s important to him so he’s going to be good.

Connor Hughes, SNY: Are you starting to see things more from Jermaine Johnson?

He’s been steady, he really has been steady since the beginning. In practice, it doesn’t pop, d-line don’t pop as much unless it’s just a clean win right now, but he’s been really good across the board. He flushed Jalen (Hurts) in that preseason game on that first drive. He flushed him out of the pocket, our defensive left, but he’s been coming along, he is getting a lot better. Still, the power game has to be a big part of what he does because, again, his hand eye coordination and his movement, ability to win one on ones is pretty good. He’s just got to learn how to bring all that power and make it a guessing game, give himself a three-way go.

60? So, everyone knows I have an infatuation with the Navy Seals, and there’s a lot of respect for them and they talk about fight or flight. Everybody’s fight or flight doesn’t kick in until you’ve achieved 40% of what you’re capable of. Everyone’s 40% is different, so when you’re on the field and you feel like you’ve gone far enough, you’ve only accessed 40% of what you’re capable of and you have 60% more and to get into it, you have to go to a dark place, and the darker you get, the more you’ll access. That’s about it.