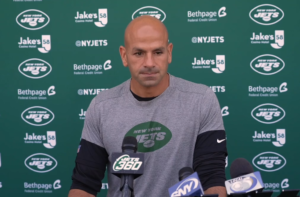 Brian Costello, New York Post: How much coordination goes into this in terms of you and Matt (LaFleur) going over what you want to get accomplished, what personnel groupings you are going to do, that kind of thing?

There’s a lot of collaboration, especially with the coordinators. Nate Hackett, (Jeff) Ulbrich and obviously Joe Barry and Mike LaFleur. It’s been a big couple of weeks now and we’ve been in collaboration, also, with Philadelphia to get that set up for next week. So, it’s pretty extensive.

No, it’s pretty much the same. Same group of guys that we had yesterday. AVT (Alijah Vera-Tucker) is out, Elijah Moore is out, Lamarcus Joyner is out, I’m sorry I don’t have my list in front of me. Nothing has really changed from yesterday.

Brian Costello, New York Post: Did anyone not make the trip, Robert?

No, I believe everyone is here.

Connor Hughes, The Athletic: How much of a test, we’ve talked a ton about your secondary, how much of a test is this going to be for them to see Aaron (Rodgers) and also (Davante) Adams and just the weapons that these guys have?

I don’t know if it’s a test but, I think it’s a great challenge because this group is pretty darn group. It’s an experienced group. Aaron, obviously, is a hall of fame quarterback. Davante is an All-Pro wide receiver. So, it’s a really good chance for them to see different players but we think our receiver group is pretty good too. But to be able to go against different players, different releases, different schemes, is a great challenge for them.

Brian Costello, New York Post: Is there any benefit for Zach (Wilson) watching Aaron this week or talking to him, I don’t know what kind of interaction they’re going to be able to have?

They’re on opposite fields, so I don’t know how much he’s actually going to watch unless he turns on the practice tape which I think he will do and just see how he plays against our defense and see what it looks like with our defense, which I think is valuable no matter what. But as far as live, in-practice interaction, but post practice, being able to see our film, on both sides of the ball, I think will be beneficial.

Brian Costello, New York Post: What about offensively, Robert? Both systems come from the same roots. How different is it from what you’re doing to what your defense is going to see?

They’ve been able to tailor to what Aaron does. So, there are nuances. They’re less QB under center, they have more RPOs in their system. They’ve been able to keep what Aaron likes and implement the actual system and they’ve got a pretty good thing going. It’s going to be a great challenge because there’s going to be some stuff that we know and there’s going to be some stuff that’s kind of new to us. Those things they’re able to do because of the quarterback they have under center.

Steve Megagree, Associated Press: When you’re having these team practices, how beneficial is it to have with a team who’s staff, with the mutual trust between the staffs?

I think it’s important. There’s always that paranoia that your practice tape is going to get out, there’s going to be talking amongst other teams and, “Hey what’d you see, what’d they do?” I think that if we can trust one another, I think our staffs can trust one another. All coordinators have pretty deep relationships, we’ve got relationships with the position coaches. There’s a trust that what happens in this practice will stay in this practice. I think that’s where it’s most beneficial.

Eric Allen, Newyorkjets.com: What kind of camp has Connor McGovern had and how important is that relationship with him and Zach?

He’s been having a really nice camp. Obviously, our blocking combinations, things we ask the center to do are different than what he’s done in the past. At the same time, he’s incredibly bright, he’s very athletic. Now it’s just a matter of getting reps and continuing to build that relationship with not only Zach but, the right guard, left guard, tackles, and everybody else in that room.

DJ Bien-Aime, New York Daily News: Mekhi (Becton) has obviously been going against Carl Lawson blocking him the entire training camp. Now he’s going to be going against Preston (Smith) and Za’Darius Smith. How good will that be for his development and skills, to get to go against somebody different?

For Mekhi, you can’t draw up a better situation for him in terms of the amount of work that he’s getting from three premier edge rushers. Obviously, Carl is premier in his own right. Then you get Za’Darius and Preston who are both double-digit sack guys. Even for George (Fant) and (Morgan) Moses, the amount of work that they’re getting, the quality of work is priceless. You couldn’t draw it up any better for those guys.

Andy Vasquez, The Record: C.J. (Mosley), what did you see from him so far and, how much should this help him, to kind of go against an offense that’s this good, to get him back up to speed or, has he felt the exact same?

C.J., I stood up, I can’t say enough good things about C.J. Aside from the leadership part, the man, the character, all of it, which is A++. The football part, he looked like he never left the game when we played against the Giants. He was very natural, he’s very confident in his abilities. For him to come out here, the challenge for him is, this is still a new scheme we’re installing and now they get another look where there’s a little bit of an uncomfort in terms of, he’s at the point now where he can look at the formation of our offense and he knows exactly what’s coming. Now he’s got to trust his keys, trust his eyes, trust his landmarks, trust all of it and just play good, sound, fundamental football, because the looks are going to be different. That’s going to be the challenge, but for C.J., I don’t think he’s going to have a problem.

Connor Hughes, The Athletic: And then, the comment DJ had said about Mekhi, is the flip side of it true as well, with Carl, is that now he gets to go against someone that’s not Becton?

Yeah. I’m a big Carl fan, you guys know that. I think he goes out there, and he just wins. And he’s an absolute problem for everyone. It is good for him to go against another offensive lineman, be able to work his moves and work his technique. But yeah, it’s good for him.

Ryan Wood, Green Bay Press Gazette: You’re obviously really close with Matt (LaFleur), he’s had a lot of success here over his first two years as Head Coach, I’m curious what kind of evolution you see from him as a head coach (inaudible).

I messed with him, I tell him, ‘Who’s anyone to tell Matty what to do? He’s 26-6.’ He’s been great, his confidence is through the roof, which it always was. His leadership skills, you can see all of that on display, especially just talking to him, going through this and collaborating. Just how detailed and precise he is with exactly what he wants, just having conversations with him on a daily basis. There’s a reason why he’s in this job and there’s a reason why this team’s having success, and he has a lot to do with that.

Nicole Menner, Fox 11: Is there some added excitement for James Morgan to be back here?

Oh yeah. James, you know, hopefully he doesn’t make it the Catalina Wine Mixer, I know I referenced that before, but just to come out here and do your thing and I know he’s from here and I know he’s really amped up to show how good he is. So, we’re excited for him, but at the same time, he’s got to stay in the moment and treat it like every other day.

DJ Bien-Aime, New York Daily News: How much are you looking forward to Corey Davis, that’s your number one receiver, going against Jaire Alexander, one of the best corners in the entire NFL?

Again, our receivers will be able to go against, I’ve said it before, this is a championship roster. We’re going to have challenges up and down, but it still comes back to them having to deal with us too, and Corey’s been a very good football player in this league, he’s every bit of deserving what he got this offseason, during free agency, and for him to go out there and get a chance to compete with their corners and their system is going to be a great thing to watch.

Brian Costello, New York Post: Did you say (Lamarcus) Joyner is not practicing? Why’s he out?

Correct. He’s got a lower back spasm, he should be good here in the next couple days, but just more a precaution.

Connor Hughes, The Athletic: Sometimes with these practices, Robert, players can get a little intense. You’ve got big brother/little brother on the sidelines, are you going to talk to them about simmering it down at all?

(Laughs) They’ll still get into their wrestling matches when they’re in the privacy of their own homes. (joking) But no, they’re good, it’s all professional, the whole thing. Everyone knows exactly what we’re trying to get done. But it’s going to be fun. Good, intense practice, hopefully it stays clean.