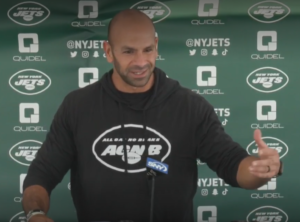 Zack Rosenblatt, The Athletic: You didn’t want to field any punts yourself?

I got hit in the head. I was dodging it, trying to get out of the way. We had a tie in the basket, him (Ulbrich) and Boyer. We had Madison and Chatham going at it in the scrimmage yesterday, football. (Brant) Boyer’s son and (Jeff) Ulbrich’s son are on separate teams and they came in this morning bragging about how their kids did, so I was like, let’s take it to the hoop and they tied on the hoop, so we settled it out there.

Rich Cimini, ESPN.com: We haven’t talked to you in a couple of days, can you just give us an update on Zach (Wilson)?

Zach flew back last night. He’s here today. He’s already walking, he’s in really good spirits, and he’s chomping at the bit to get to rehab.

It’s exactly what we’ve said. It’s really going to dictate on how he feels and when he’s ready to go. We’re going to make sure we do right by him in terms of making sure that he’s 100% healthy. Whenever that is, that’s when he’ll hit the field.

Antwan Staley, New York Daily News: You’ve got the joint practices coming up, any message that you give your team ahead of joint practices? They’ve been a little testy throughout training camps.

Yeah, it’s usually the second day, but it doesn’t change. We treat them like we treat ourselves in terms of protect the team. All the same rules of keeping guys off the ground, no slinging, no pulling, no holding, just play clean, play fast. Maintain our style of play, but at the same time, you treat them like you would your own teammate and making sure that we’re getting something out of these practices.

Zack Rosenblatt, The Athletic: What is the plan for the joint practices? Is it going to be kind of like regular practice just going against them? Or you guys are going to do more scrimmaging?

Bob Glauber, Newsday: Did you get a chance to talk to Joe Klecko?

I did, out there. I don’t know if you guys have ever shook his hands. I mean, the guys got a couple of cinderblocks for hands. I’ve never felt hands like that except from the late, great Ken Norton Sr. but (we had) an awesome conservation, really pumped for him. I know he’s not in yet, but he deserves to be in, he’s one of the greatest Jets of all time, really cool to see how that works out over the next few months.

Rich Cimini, ESPN.com: It looks like Duane Brown is getting closer, he did some positional stuff today, so what is the anticipation in terms of getting back to team drills?

I’ll see, I’ll talk to the training staff. Like I said earlier this week, we’re expecting him to get some reps here in the next couple of days. He looks really good, so I’ll have a better answer for you guys a little bit later.

Rich Cimini, ESPN.com: LaMarcus Joyner, we haven’t seen him in a while. What’s up?

He was here today just getting back in. So, he’s back from his illness and just giving him a day to ramp back up.

Antwan Staley, New York Daily News: Lawrence Cager made some plays out there today. Can you talk about him and the progress that you’re seeing from him?

He looks really good. He’s doing a really nice job, he’s transferring over to that tight end position. He’s got a completely different mindset than he had a year ago and I really like where he’s at. He’s got, obviously, a long way to go in terms of learning the run game and what we’re asking out of that position from the tight ends, but I love his attitude, I love his want to, love his physicality and just really excited to see where he can take us.

Rich Cimini, ESPN: Going back to Zach for a second, obviously, you’re not going to play him in until he’s healthy but the calendar is working against you as opening day, I think it’s three and a half weeks away maybe.  Realistically though, are you in your heart of hearts thinking that Joe (Flacco) is going to open the season?

I don’t know if I have an opinion on that one, Rich. If Zach is ready to go, he’s going to be the Week One starter. If not, then Joe will, that’s no secret. Again, we’re going to take it by how Zach looks, how he feels, how he moves, what the doctors tell us and whenever that moment is, he’s stepping on the football field.

Zack Rosenblatt, The Athletic (follow up): However long he’s out, how important is it for him to get those mental reps?

They’re priceless. They’re priceless. It’s the only thing that he can do is meetings, walk throughs, not that he’s going to get walk through reps right now with just being fresh off the surgery, but being able to go back and watch practice, watch the walk throughs, ask questions to the quarterbacks, talk with (Mike) LaFleur, talk with (Rob) Calabrese, and absorb as much information. Unfortunately, he’s been through this before. Last year, he had to go through the same thing for four weeks. It’s going to be the same process now. He had a lot of great growth last year and expecting to have continued growth this year.

Dennis Waszak, Associated Press: Robert, when you got the news that there was no further damage to the knee, was that a moment for you as the coach to kind of take a breath?

Yeah, and again, I’m not thinking about the team, I’m not thinking about me, it’s about him. Any player that gets hurt where you feel like there’s worry that their season might be over, I’m not in a selfish moment at that point. I don’t think anyone is, it’s all about him. So, when you get that news, you’re thankful and glad for him because you know that he still has a chance to accomplish all the different things that he’s been trying to accomplish since the season ended last year.

Bob Glauber, Newsday: What was that drill at the end?

With the punt? That was Boyer and Ulbrich fielding punts to settle the score. So, it’s a fun little deal. Their kids went at it yesterday in a scrimmage, Chatham vs. Madison. They were bragging this morning about how their kids did, so we took it to the field.

Bob Glauber, Newsday: When you see that kind of laughter and joviality after a long, hot practice, do you kind of say this is a good thing, team chemistry wise?

I’m wondering if we should have had more reps, they had a lot of juice. I think we’re in a really good place. I’ve said it before, I love the locker room. I think we all love the locker room. We love the players that we have. They’re made of the right stuff, they cheer each other on, they’ve got each others backs. To be able to have those moments are cool, but at the same time, they know when it’s time to go too. So, it’s a cool locker room and like I said, it is a tight knit group and it is fun when we’re able to let loose a little bit too.

Eric Allen, New York Jets: What do you think of Isaiah (Dunn) today, what does it say about the depth that you guys now have at the cornerback position?

He stands out. He’s been very sticky in coverage throughout camp. Obviously, he got to play last year and he made the team as a undrafted free agent, but he’s having a really nice camp. He’s bigger, he’s stronger than he was a year ago. He’s much more comfortable in the system. His man-to-man stuff has never been an issue for us, so it’s just a matter of him learning how to play within zone schemes and learn how to play and understand offenses how they play and receivers. This wasn’t his only good day. He’s been stacking up a lot of good days together and obviously, he still has a ways to go, but at the same time, you just love that direction he’s been going in has been up since the end of last year when he hit the weight room and he showed up to OTA’s the way he did and everything that he’s done since then.

Eric Allen, New York Jets: Has it been good that you D.J. (Reed) back in the mix?

Oh yeah, it’s always good to get him. He loves ball, he’s an absolute dog. Plays his absolute tail off, communicates his tail off, has a lot of juice and energy at practice, so getting him back is always a plus.

Andy Vasquez, NJ Advance Media: I keep asking about this but, Quinnen (Williams), do you expect him to participate this week? How’s he? I saw him out on the side field.

I’m hopeful. Again, we’ll get more information as we go, but I’m hopeful.