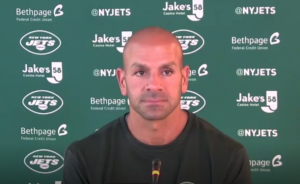 Peter Botte, New York Post: Robert, what are you thinking heading into this week of practice against the Packers? How much can your team get out of this?

I think we can get a lot out of it. It’s an opportunity to compete against a hampionship roster. Obviously, a new set of plays, scheme, both offensively, defensively, and even special teams. You get to lean on a different body for a couple of days. I value these things greatly. If you go in there with the right intent to compete and not look at it like it’s a free for all where you’re trying to do extra. I think they’re just valuable.

Al Iannazzone, Newsday: Do you talk to your team about that, or do they know? The last part where you’re talking about not making it a free for all.

Rich Cimini, ESPN: Robert, are there any players that aren’t making the trip for injury reasons or otherwise?

We have to get that report here in a little bit, Rich. I can obviously answer that better for you later.

Rich Cimini, ESPN: I just wanted to ask you about Zach (Wilson) following up on what you just said. Specifically, what can he get out of facing a different team for so many reps over the course of two days?

It’s like we talked about. Part of the process of getting better is getting reps against as many different looks as possible. He’s been seeing our defense, he’s been seeing our system. It gets to a point where he needs to see something else so he can take another step in his process. Their system is different than ours, they’ve got different fronts, they’ve got different coverages, they’ve got different players, and how they react, they got a different play caller. He’ll be able to go through all that and just his eyes and visually how route concepts play out to a new set of coverages is incredibly beneficial for him, to be able to see it live and then go back and watch the tape to have that recall. Like I said, I think these practices are priceless.

Eric Allen, NewYorkJets.com: How much does your relationship with Matt (LaFleur) help you as you guys go about these joint practices?

Al Iannazzone, Newsday: Robert, what’s the progress you’ve seen from Zach from last week through the preseason game and these two practices, what have you seen?

Obviously, the results have changed for him, but the process has been the same. He’s going through it, he asked, sitting in the quarterback meeting yesterday, he’s asking not the same questions, but he is just curious about everything. He’s got all these questions about what he sees on tape and, “What if this happens?” To me, he’s so far ahead with regards to how he sees the game, it’s not just, “What’s a formation, what’s my play call?” He’s looking at the other side of the ball and he’s doing a really nice job and, like I said, the results are changing but that can flip another time. His process has been consistent, and it’s been consistently good. Hopefully, we can continue to build on it.

Rich Cimini, ESPN: How long do you think he’ll play on Saturday?

Right now, obviously, we got to talk. Hoping to get him a couple of series just like we did against the Giants, maybe a couple more after that, maybe one or two more. We’ll see, we got to talk towards the end of the week. See how these practices go, Rich.

Dennis Waszak, The Associated Press: Robert, would Zach play in the third game? Is that something you would consider, having some of the starters playing in the last game against Philly?

Peter Botte, New York Post: Robert, you talked about the value of these practices, does that make it hurt a little more that Elijah (Moore) is out? Just because, as a rookie, to get that experience and to play in these first couple of preseason games?

Yeah, Pete, it’s all of them. Anyone who’s not going to get an opportunity to get these reps. Whether it’s Elijah Moore or a veteran. Not that it hurts them, it’s just a missed opportunity to see something else and get a little bit better. Like I said, I just value these practices, and if you’re not able to participate, not that it’s a knock on you, it’s just not great.

Andy Vasquez, The Record: For your defense to go up against (Aaron) Rodgers, (Davante) Adams and all those guys over there, just what will you learn about them and how much can they learn from this whole experience?

You can learn a lot. This is an organization and offense that’s year three in their system now. They’re efficient, they’re fast, obviously a hall of fame quarterback in Aaron Rodgers. They got a great offensive line, a great run game, I respect the heck out of their o-line coach and just overall, just the scheme. We’re going to see a scheme that is on point with regards to efficiency because like I said, they’re year three now. So, we’re going to be challenged in terms of precision and the value of it is to see how precise these great offenses can be and it’s going to be a tremendous valuable lesson for everybody, not just the defense.

Rich Cimini, ESPN: Robert, you got a long look at James Morgan and Mike White, the other night. I’m curious what were your takeaways on them and how do you feel overall about your number two situation at quarterback?

Like I said, there’s some ups and downs with both of their performances. I think both of them entered the game excited and then they settled in and got into a rhythm. But again, their first preseason action in God knows how long and it was Morgan’s first action at all, so it was such a big moment for those guys. But we’re happy with how those guys are progressing and this is going to be a really good week for them to showcase where they are. That process is still going.

Al Iannazzone, Newsday: Do you anticipate (Alijah) Vera-Tucker playing in one of the last two preseason games and how important is it for him to get used to the line and everybody?

Eric Allen, New York Jets: How important is special teams value when you start looking at the depth of this roster?

They’re a tremendous value. We talked about it the other day, the special teams coordinator (Brant Boyer) doesn’t sit in the corner without having an opinion. He’s going to have a say so, he’s still a big part of this game, even though the rules are trying to tilt against it. He’s still a big part of this game and when you look at value of roster, how much can you contribute to special teams, especially if you’re not a quote-on-quote starter? Your value on special teams becomes that more important, so it is very valuable.

DJ Bien-Aime, New York Daily News: Saturday, you mentioned how some of DBs have drew some pass interference and illegal contact. I remember one, Brandin Echols, down the sideline when they threw to (David) Sills. So, when it comes to the DB and getting too handsy, how can you, from your perspective, how does a DB prevent getting into those situations where they can end up being flagged for a pass interference?

It all goes back to trusting your technique, trusting where you are in the down, having a good feel of where that route is going and not panicking at that point. A lot of times we get grabby because we do teach an aggressive style, so you might get grabby because you may have false-stepped, you might not have a good feel for the route but it takes a lot of reps. Again, in that game, they’re seeing new people, they’re feeling different players, so it’s a great learning experience. But again, reps, trusting your technique, trust where you are in position and just have a great feel for it. But that feel will come in time with reps.

Dennis Waszak, Associated Press: Robert, meant to ask you this yesterday about kickers. What went into the decision to cut Chris (Naggar) and keep Matt (Ammendola), at this point?

Just the opportunity to let Ammendola see if he can get a strangle hold on this thing. Obviously, there’s roster moves that need to be made and Chris’s story has not ended. I still think he has a chance to circle back, but right now with the opportunity he was given, and the ability to give Ammendola an opportunity to see if he can seize this thing, and the fact that obviously with rosters and trying to make sure we have, I think it was down to 85, so that was basically the decision behind that.

Joey Chandler, NJ Advanced Media: With the relationship you had with Matt, just going back to your college GA days, how big is it that you’re both sitting here now as head coaches and get to have a weekend like this together?

I think it’s cool. Obviously, Matt, and the entire LaFleur family, we’re very, very close and when we were sitting there as GAs at Central Michigan, I don’t think we ever thought this would happen. But it’s pretty cool that it did.

Dennis Waszak, Associated Press: Have you made those final cuts? Are you down to 85 at this point and gotten those last cuts?