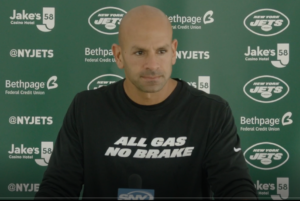 He’s just going through practice. Maybe get him a couple of reps when we get to Green Bay, but we’re going to ease him in and just use this week to kind of give him a chance to get his wind back.

DJ Bien-Aime, New York Daily News: Robert, in preseason schematics standpoint, how much do you try to pull back some of your more complex defensive calls so teams in Week One, Week Two don’t have that type of advantage?

It’s really not so much to kind of hold it back from Week One, but more of a chance to give these guys a chance to go play. You saw from the Giants, two very basic vanilla offenses, defense, and special teams; give our guys a chance to just line-up, play football, like we said, over 30 guys it was their first preseason game, and just to keep the thinking off of them so they can go play and showcase who they are.

Rich Cimini, ESPN: We saw Ryan Griffin come off with a trainer, do you have an update?

He’s being evaluated for a hamstring. We’ll know more later on this afternoon.

Connor Hughes, The Athletic: Going into this week do you have any updates on Elijah (Moore), both of the Elijah/Alijahs technically?

Yeah, so (Alijah) Vera-Tucker obviously is still day-to-day. Elijah Moore not expecting him this week, hopefully get him back next week for Philadelphia. Not worried about his status for Week One.

The depth. We can truly come at them in waves. We usually activate eight guys on defense on the d-line, and we want all eight playing a significant amount. Especially, on the inside where you’ve got Quinnen and Foley (Folorunso Fatukasi) and Shep (Nathan Shepherd) and Rank (Sheldon Rankins) and then Tanzel (Smart) is doing a great job and so is John Marshall, and I’m sure I’m missing someone but it’s a really good interior group, it’s really deep. And the amount of push they get is pretty cool.

(Follow up): How do they compare to your 49er interior?

Never want to compare, always compete. You know, their effective in their own different ways. At the end of the day, it’s about winning, and we’ve got tremendous confidence in this group winning at a very high rate, no different then what the 49ers were able to do.

Rich Cimini, ESPN: When you get Quinnen, when he’s 100 percent and back to his old self, how do you think this scheme will accentuate what he does best?

The man is just pure mass, right? I mean you look at him, he’s enormous, and to get all that mass moving forward without having to read anything on the fly is just absolute attack up front. It’s hard to stop that mass from moving, especially with how strong he is, how smart he is, how violent he is and how explosive he is. So, the amount of knock-back that we feel like he’ll be able to generate in this scheme and the amount of disruptions that we feel like he’ll be able to generate, it’s going to be awesome but obviously he’s behind. He didn’t have OTAs, he didn’t have training camp, he’s got a lot of catching up because it’s not a simple technique. It takes a lot of reps, a lot of trust and so getting him back is exciting.

Brian Costello, New York Post: Robert, when we talk to defensive linemen and they talk about about your system, and you’ve said it too, going straight forward at full speed. Are there risks with that at all, in terms of draws, screens, letting the guy step up, what’s the teaching point in that regard?

There’s things that offense will do to kind of slow us down, but that’s all part of the teaching progression too, you know. There’s one thing, when you talk about screens, talk about defending screens being all about effort, especially on the defensive line level, you’ve got to stick your foot in the ground, retrace, and we call them stack monsters, coming out of the stack and their hair is on fire trying to get to the ball carrier. So, there’s stuff offenses will do; they’ll attack different techniques, but when you do it as much as we do, you get used to it, and those guys know how to react pretty quickly when they actually see it happening.

DJ Bien-Aime, New York Daily News: What do you want to see from your corners this week, as they go against Green Bay?

Compete. It’s not different, just compete every day. Obviously, the jersey is different, the players are different. We feel like we’ve got really good receivers here and they’ve been competing their butts off against them and it’s going to be no different with Green Bay. A lot of respect for the ones that they’ve got over there and it’s just a great opportunity for us to go compete.

Dennis Waszak, Associated Press: Robert, an under the radar guy for some of us is Zane Lewis. He’s had three picks over the last several days. He moved from corner to safety, what’ve you seen from him?

You know, he’s been doing a nice job. Obviously, there’s a learning process that he’s got to go through, going from corner to safety and feeling all that, and I thought he’s done a really nice job through OTAs and training camp. He’s stacked up some good days and he’s got to continue to stack things up. But I’m encourage with the way it’s gone for him so far.