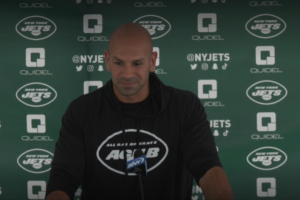 Connor Hughes, SNY: Do you have an update on Zach (Wilson)?

Yeah, he’s on his way to L.A. to have his procedure, and then we wait.

Zack Rosenblatt, The Athletic: I know you were hesitant to say that you were optimistic the other night, are you feeling a little better after you’ve been able to get a look?

Based on all the information that’s been presented to us, I feel good. But, again, as I’m learning, you never know.

Rich Cimini, ESPN.com: Do you have a confidence level on his potential availability for the opener?

Connor Hughes, SNY: Say the opener is the target for Zach, there could be an unintentional rush from him to be back and kind of start trying to cut the corner to make sure he’s there. Would you ever think about saying, you know what, opener is not happening, take your time, let’s make sure that when you get back, you’re right?

That’s a fair point, it’s a really good question. I think it’s all going to depend on what happens here with the surgery and the feedback we get from the doctors. We’re working with (Dave) Zuff (Zuffelato) and gathering all of the information before we even come remotely close to making that decision, but that’s all valid and something that we’ll all talk about once we get all the information that we need.

Brian Costello, New York Post: When is the surgery scheduled for?

Brian Costello, New York Post: Is that the same knee doctor? I can’t think of his name…

So, Mekhi is also going to the same doctor, but it’s more of a consultation before they make a decision on whether or not they are going to do surgery.

Ryan Dunleavy, New York Post: What was the conversation like with (George) Fant? It seems like he was at right tackle which means Duane (Brown) will be at left tackle.

For George, his curse is also a blessing in that he is extremely versatile, very athletic. He is a team guy, tremendously talented, so to give him the opportunity to go play right tackle, obviously, he is a competitor. He just wants a home, but at the same time he’s the ultimate team guy. I know he is going to put in the work and he’s going to do everything he can to be the best right tackle he can possibly be, but it was a very good, productive conversation. But again, sometimes a players greatest blessing is also a curse, but I think he’s going to be great out there.

Ryan Dunleavy, New York Post: (follow up) Does it help that they have a relationship? Him and Duane obviously go way back.

That would be more of a question for him, but I don’t think George really has an issue with anything either, but I do think it’s good to have familiar faces. We need to get those five playing together a lot faster. We have not had the continuity with that group for a while and at all during OTA’s and training camp. We just want five guys to play together and build some continuity.

Rich Cimini, ESPN.com: In the offseason, you were really high on the way George played last year at left tackle even going so far to say that he’s got a good chance to win that job. Is that a tough decision for you?

It is because you still want to put your best five forward. That is the number one responsibility for all of us is to protect the quarterback and you can argue that George’s left tackle production was better than when he played right tackle but that was a different scheme. We think he’ll be fine playing right tackle in our scheme. He hasn’t had a chance to play right tackle in our scheme, he played left tackle last year. His right tackle production numbers came from two completely different schemes. We think he’s going to be fine. We think he’s a very gifted athlete, he’s very smart, he’s got the right mindset to him, so we think his production is not going to drop off at all.

Connor Hughes, SNY: You mentioned a need for continuity. Is there a concern at all that Duane didn’t really practice much last year in Seattle because of his age? You are bringing in a guy that’s 37.

Yeah, we had really good talks with Duane. A lot of their time off was because they had to play on the turf because of all the rain and all that stuff, so they practiced on the indoor a lot more, so there’s a lot more take it easy on the knee. We play on grass and we practice on grass a heck of a lot more and with our performance staff and the way we have our practice schedules, we feel like we’ll be able to get the work in that we need, especially from a protection standpoint and all the different walkthroughs we have to get him the work that he needs.

Connor Hughes, SNY: You mentioned that Mekhi was going for a consultation, but he’s also not on the injured reserve list yet. Do you guys still think there is a chance that he could play?

Zack Rosenblatt, The Athletic: What is the plan for Duane when he gets here? Are you going to do the same conditioning like you did with Kwon (Alexander)?

Same, we’re going to see where he’s at. I have a feeling he’ll be just fine and he’ll laugh off the conditioning measures that we have, but we just want him to go through that hurdle.

Brian Costello, NY Post: With Zach, you had hopes for training camp and his development, the joint practices with Atlanta and the Giants, how much of a setback is this just in terms of development?

It’s a setback in that he’s missing an unbelievable opportunity to get these reps in and to play other defenses, especially the Giants who have such an elaborate pressure package system, a pressure system, but he’s got to stay dialed in just like he was last year when he was hurt, learn from his teammates and try to be involved as much mentally as he can possibly be. The timing of it all is terrible and it sucks, but I think Zach can still have an opportunity to grow from it if he attacks it mentally.

Joyner has an illness.

Rich Cimini, ESPN.com: A big picture question on Zach, it’s two knee injuries to the same knee in a 10-month span, are you concerned about the stability of the knee?

Connor Hughes, SNY: We talked about Carl Lawson playing in the preseason opener, what changed?

That was me and he was pissed. Him and CJ (Mosley). The intent was to play them both and I woke up that morning and just said you know what I’m going to let them go through the mental aspect of it to get their bodies right. So, they were mentally preparing themselves to play and then we were in the locker room before kickoff and I told them to leave their helmets in the locker room and that was for me too, for Carl, so it’s not overload and for CJ, so they’re not getting such an overload of emotions, but they cleared the emotional hurdle, especially for Carl more so than CJ, but just clear the emotional hurdle, next game he’ll play for sure, for sure, for sure, for sure.

Mark Cannizzaro, New York Post: Robert you’ve obviously spoken a lot about Joe Flacco and your confidence in him, now that he’s going to be in there and he’s obviously taking reps, can you speak to what you expect out of him as you approach Week One?

Yeah, he’s a pro, he’s a veteran, he’s been there, he’s done that. He’s a Super Bowl MVP, he’s a world champion, he’s gotten the big contracts, he’s pretty much checked every box you can check. He knows how to play the game, he’s very calm, he’s collective. We had the two-minute drive, very smooth in his operation. He’s a veteran and I just expect him to approach it like he has his entire career.

Mark Cannizzaro, New York Post: Quick follow up there, he hasn’t really been playing for a while in real games, is there a silver lining here? I mean obviously no one wants Zach to be out, but for him to be in there and actually be performing and maybe show you that this guy is going to win games for you.

I think he’s going to be fine, and for the remainder of preseason, we’ll see everything else with Zach’s knee and how that comes out, but we’ve got all the faith in the world in Joe. He played last year, his first start against Miami, who was absolutely rolling and he threw for over 300 yards at home. Obviously, we didn’t win, but he did what he needed to do, and the offense played the way it needed to play. He’s a pro, he’s going to figure out how to get it done.

Connor Hughes, SNY: It didn’t escalate too much, but towards the end of practice, Nathan Shepherd and Garrett Wilson were face to face?

You know what, I’m actually so proud of Shep, because you guys have been around Shep, you know that would’ve been a big-time brawl for younger Shep, but for him to show restraint with Garrett, which I thought, no offense Garrett, I thought it was kind of cute (laughter), you know going after Shep. I know Garrett’s a competitor and he’s intense. He went up a whole other notch on game day, which I thought was awesome. But I want to celebrate Shep because old Shep would’ve been punching and swinging, and he remained composed which was awesome.

Connor Hughes, SNY (follow up): Does that kind of show something about Garrett though?

On game day it just switched to another level, he is an ultimate competitor. I know how hard he is on himself if he drops the ball, if he misses an assignment, if he doesn’t do something right, if he doesn’t win a one on one, everything is personal to him. When people live with that chip on their shoulder, where everything is personal, they usually find ways to get things done. So, I do appreciate that part of his game.

Brian Costello, New York Post: Robert, how impressed were you with (Chris) Streveler Friday night for not getting any team reps?

We just talked about it in our team meeting room, production versus trust, and you can have a ‘woe is me’ mentality, he hasn’t had a rep, hasn’t had a walk through, he hasn’t had anything, anything, anything for three weeks and then he’s with the full understanding that he’s playing the fourth quarter of the preseason games. He steps in there and he’s just up and down the field, he’s just playing quarterback and throws a nice seven cut to Calvin (Jackson) to win the game. He’s calm, collected, been there, done that, and just a great example for every professional, throughout all 32 teams, that you can either complain and dwell on what your opportunities are or what your circumstances are when you get your opportunity, or you just go dominate and that’s what he demonstrated, and I thought it was really cool to see.

Rich, ESPN.com: Just on Chuma (Edgoa), is he dealing with something because it didn’t seem like he was out there?

Yeah, I think he had something in practice. I’ll get the update here in a minute.