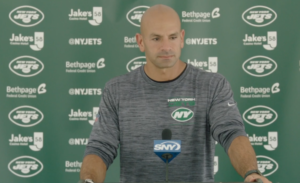 Right now, he’s being evaluated for a quad. So we’ll have more details later on in the afternoon.

Connor Hughes, The Athletic: Could that potentially keep him out on Saturday?

Depending on the prognosis, for sure.

Rich Cimini, ESPN: When you say evaluated, does that mean an MRI?

You know what, it probably will involve an MRI, but just whether it was nothing or something, they’re always going to check and got through all those protocols to make sure that they check every box.

Al Iannazzone, Newsday: Was anything before, like did you know about it before practice, or something happen during practice?

It was during practice. We’re trying to figure out where. We think it was around one-on-ones or something. But we’ll see.

Connor Hughes, The Athletic: Are you worried? I mean you’ve kind of said before like, “Oh, I’m not too worried,” it’s not one of those where you’re…

You know I’m trying to get a feel. I’m an optimist. So I’m never worried until I’m worried. So, like I said, we’ll know more.

Yeah. He’s on track to be able to practice in Green Bay. Just like from the start.

Connor Hughes, The Athletic: When you say that like, when you’re saying Quinnen is on track to practice in Green Bay, you mean a full participant; team drills?

Full participant. He won’t get the reps that everybody else has got because it’ll be his first practice. But he’s going to participate.

Andy Vasquez, The Record: What’s the, you’re going to do like a simulated practice tomorrow. What does that entail?

Really, it’s just trying to simulate 10/15 plays, get offs, get back to the line of scrimmage, the best we can to try and push on somebody. Just try to create as close to a practice environment that you would get to, it won’t come close because of the amount of push-pull and all that stuff that happens, but doing our best to try to simulate that for him.

Al Iannazzone, Newsday: So first practice will be when you’re out there?

I wish I had it in front of me. He’s got groin tightness, I believe. Yeah, it’s the groin.

Connor Hughes, The Athletic: I know we talk about this all the time, but (Alijah) Vera-Tucker getting closer?
He’s getting closer. It’s just a matter for him, with his pec, just getting a little bit of strength. We’re not worried about him at all.

(follow up) Green Bay week then for him as well?

Hopefully. But that one’s going to be more day-to-day.

Al Iannazzone, Newsday: How much is he missing by not practicing?

He is involved in all our walkthroughs, he’s involved in all the meetings. I think those walkthrough reps are valuable for him too, extremely valuable. But, anytime you don’t get those live reps, like I said all the way from the beginning, every player, every rep matters. So yeah, he is missing it, but he’s got great intent, he’s studying, and if there’s anyone on this roster that can make up for it, I think he’d be one of them.

Rich Cimini: We haven’t seen Chuma (Edoga) at all, I know he’s dealing with a knee thing but, we haven’t even seen him out on the field in the rehab area. Can you give us an update on what his status is?

Yeah, he just finished up his surgery, just to clean up some stuff. So he’ll be ready, I’m guessing, towards the end of training camp.

Joey Chandler, NJ Media Advance: You’ve talked a lot about how Elijah Moore walks kind of like he’s been here before. Do you think that mentality will be helpful dealing with something like this, if he’s out for a little bit.

Oh yeah. You already know that if this is something, whether it’s little or not, he’s going to attack the heck out of it and make sure that he’s doing everything he can to get it back to 100%. So that part is the furthest from our worries.

Al Iannazzone, Newsday: Will Saturday mean anything to you, first time?

I think it’s awesome, obviously. Every day is an unbelievable blessing. But it’s always about the players. It’s a great opportunity for them to showcase who they are. 31 other teams are going to get their tape for the first time and the style they want to represent and all the different things that they want to showcase, I think that’s what’s most important about these preseason games. You can take them for granted from a team standpoint because it doesn’t matter in the win/loss record but your style of play and what you want to represent and what you want the entire league to know about you starts Saturday. That’s why I think there’s tremendous value to these preseason games.

Connor Hughes, The Athletic: How much will Zach (Wilson) play, have you guys figured that out yet?

We’re thinking about a quarter, couple of series for all those guys. Just kind of get him his first action.

Rich Cimini, ESPN: When you’re mapping out your reps for the game on Saturday, does it matter what the other team is doing? Like if they don’t play their starters and they pull their starters early, because I think (Joe) Judge was saying something that they may not treat it like last year?

To a degree, but at the same time you have to get your guys ready. We are a very, very young football team and they’ve got to be able to go through the process of pregame and prepping themselves mentally and getting in their own space and getting ready to play a football game and then going out there and playing a couple of drives. If you think about it, if you count last year’s group, 30 guys on our roster, somewhere around there, that have never had preseason action. To me, this is a big deal. These moments are priceless, especially for this team.

Al Iannazzone, Newsday: Do you feel a sense that they’re ready to go up against somebody else, I mean do you feel that?

Connor Hughes, The Athletic: Zach seemed like he was taking a little more control at the line today, he looked like he was calling audibles and making some adjustments. Is that something you’re now, this week, giving him the freedom to do? How has that kind of changed because I think it’s one of the first couple of times it seems, and he did it pretty effectively?

(follow up) How do you think the battle between (Morgan) Moses and (George) Fant is shaping up to this point?

It’s competitive, they’re two professionals. I’m actually enjoying the fact that those two talk all the time about technique and they’re helping one another out, I think it’s pretty cool. They exemplify professionalism and it’s been fun to watch.

Andy Vasquez, The Record: I probably should’ve brought this up last week, but last year when you were with the 49ers, (Kyle) Shanahan expressed some concerns about the turf after what happened at MetLife. Do you have any concern about it, did you have to address that coming in and, kind of, where are you at with that?

No, last year the turf was brand new and because of the awkwardness of 2020 it was a lot softer. Being out there for the Green & White, it’s obviously been packed down. It’s much firmer. It’s not a problem at all.