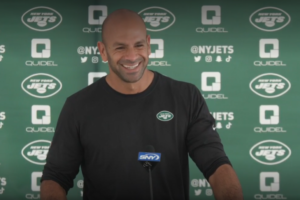 Rich Cimini, ESPN.com: (follow up) What will you do with Carl in the preseason?

Right now, he’s scheduled to play. So, we’re getting him ready to go.

Brian Costello, New York Post: What are you hoping to get out of Friday and what’s the objective for the first preseason game?

Execution. Just giving guys, I talked about it when we broke the team down just now. It’s really the first time that 31 other teams get to see your tape. Just really diving deep into the playbook, making sure you’re on your P’s and Q’s, and executing at the highest level. Just giving yourself a chance to put your best foot forward.

Connor Hughes, SNY: It seems like Zach (Wilson) has been a little rough early on consistently now it’s been kind of day after day after day but he’s getting a little bit better. How would you access how he seems to have potentiall turned that corner? It’s been good. The game is slowing down, all those good things, obviously there’s another level that’s going to get reached, but I really like the way he approaches every day. He’s unflappable in terms of just not really losing confidence and getting down on himself after a bad play or a bad day. Again, he had a bad throw today and turned right around to Mike (LaFleur), they had a discussion about it and kept it moving. So, I really like where his head is at right now and I really like where the entire offense is, especially in those move the ball periods. It seems like they’re executing at a high level.

Zack Rosenblatt, The Athletic: It seems like yesterday there was a few more fights than usual. In fact, there was another one today, are you concerned at all about the increase in number of them?

No, I mean you guys all have siblings I assume, most of you all? You know, I was in a little argument, I am 43 years old and you just fight with your siblings. It’s a band of brothers like I talked about. This morning I was in an argument with my brother, I am 43 years old and it took me back to my junior year of high school and I suplexed him in the living room right on his face. That’s right, I did that. It’s not like they don’t love each other, but it gets competitive out there, it’s hot, it’s sticky, they’ve seen each other over and over again. I think this is a really close group and a really cool locker room.

Mark Cannizzaro, New York Post: What is your level of anticipation for Carl (Lawson) to see him on the field again after what he went through last year. How does he look this summer?

I’m excited for him, especially that first snap, just to get it out of the way for him because there is still an ease of mind that has to come through. Just going out there and playing and I know he’s practicing and he feels comfortable, but it’s still going out there and playing and just getting your pads loose. Like I said, he’s been ready since OTA’s and you don’t want to treat him like he’s in bubble wrap, but at the same time you got to be smart. I love Carl (Lawson) and really excited for him and where he is at.

Al Iannazzone, Newsday: He is all gas. Do you worry about it?

I worry every play for every player. It’s this whole age now where it’s like please, please, please, okay good, next play. And the first person I look for isn’t Eric (Gelfand), I go right to (Dave) Zuff (Zuffelato), our head trainer, then thumbs up we’re good? He gives a thumbs up and I’m like great, another day we’re moving on, but I worry about all of them, every play.

Connor Hughes, SNY: Are you seeing the benefits of that lighter offseason now that you’re two or three weeks through camp?

I will knock on wood, but I don’t know if we’ll see it until the middle of the season, Week 4, when it becomes residual. And that’s stacking on top of each other day after day after day, whether or not the long-term effects is what we’re looking for. The short term, you’re really trying to avoid all the soft tissues and all that stuff, and you do a good job of trying to stay off the ground and you’re not getting guys rolled up and all that stuff, but I think it’ll really show it’s face starting in Week 4, 5, 6 and as the season gets deeper.

Mark Cannizzaro, New York Post: What is your expectation for Zach and for the offense for Friday?

Same one or two series. If they put together a good first series, we’ll call it a day. If not, we’ll just go out there and try to get a certain number of plays.

Mark Cannizzaro, New York Post: Specifically with Zach, what do you want to see in that short period of time?

No different than anyone else. Just execute the best way you know how. Get comfortable in a game situation, timing, clock, play clock, getting out of the huddle, getting lined up, playing through cadence a little bit. It’s really their first time playing a game since whatever the last time was, so it’s just a matter of just getting out there and getting comfortable. No expectations.

Rich Cimini, ESPN.com: Will it go (Joe) Flacco and then to (Mike) White?

Something we will talk about here with our staff meeting coming up.

Ryan Dunleavy, New York Post: (Follow Up) You had Max (Mitchell) out there today. Do you consider that an open battle?

That right tackle spot is open.

Connor Hughes, SNY: What have you seen from Max? He was a little bit more of a developmental guy when you took him. I’m sure you didn’t exactly pencil him in as a potential starter in year one, so what are you seeing from him to even have him in that conversation?

Love his play demeanor, love his mindset, love where he’s at with regards to responsibility and execution. Obviously, he’s got a way to go with regards to understanding pass sets and how to play in those one-on-one situations, and same thing in the run game. It’s all leverage and angles and all that stuff. He’s learning. I promise, he’s never seen ends like we have, and they’re all like that in the NFL. They’re talented. Like where he’s at. Obviously, he’s got a long way to go, but he’s a lot further along than we thought.

Zack Rosenblatt, The Athletic: Going off of that, for the offensive line in particular, how valuable will Friday be going against some guys they haven’t been practicing against?

I think they’re all valuable. You get nervous in this day-in-age because everyone talks injuries because there’s tackling and all of that stuff, but for the o-line and d-line it’s all the same. It’s no different than what’s out here. It’s actually probably even safer because you anticipate guys falling because of tackling. I think it’s not necessarily a measuring stick, but it’s good for them to go against different bodies, different techniques, different defenses. So, I think they’re all valuable.

Rich Cimini, ESPN.com: Mekhi has presumably gotten his second opinions. Is there a definitive plan for him?

Something we’ll go through. We haven’t heard anything yet. As soon as we have something, we’ll have a plan for him.

He’s dealing with a slight hammy.

He’s close, hopefully back for next week.

Andy Vasquez, NJ Advanced Media: With (George) Fant, you’ve been limiting him in practice. Are you going to handle it the same way during the game?

It’s like a limitation. He’s out here, getting almost 20 reps a practice, depending on the day. The game, I’d be shocked if they gave him more than 10. O-line, d-line to me, it’s the same because they’re not tackling and involved in any of that stuff.

Connor Hughes, SNY: When you talk about replacing Mekhi on the right side. We talked about Duane (Brown) who’s obviously is a guy that’s 37, done it a ton, but then you also have someone like Max who potentially maybe Week One, Week Two, Week Three, isn’t as good as Duane is, but because he is young could be in four weeks or five or all the way down the line. How do you balance the immediate player, veteran to someone who can grow and evolve in the offense?

Corey Annan, NJ Advanced Media: Coach, in terms of the running back room that you have, can you talk about how they developed?

I love our running back room. There’s so much versatility in there. I’ve said it before, you guys all know Michael’s (Carter) skillset. I don’t think the first guy has tackled him yet from last year until now. Breece Hall has great three-down versatility, very smart, and showing up good in protection. Tevin Coleman has incredible explosiveness as a runner. Ty Johnson has great versatility. (La’Michal) Perine is a bulldozer. Zonovan (Knight), we’re still learning him as a rookie. I really like that group, really like their versatility, really like where their mindset is, and really excited to see them against other teams.

Brian Costello, New York Post: How hard is it to teach tackling with the way practices are now as opposed to the old days?

You know what, call me crazy, Coz. I think it’s easier. Back in the day, when everything was head across the body. Where your head was involved, you just didn’t get your head involved. It was different. You couldn’t tackle. Whereas now we’re more of a shoulder leverage tackling team where we keep our head out of the game. So, everything is about angles and chasing their hips. So, you can teach all of those principles. Is it going to be as clean? You’re still going to have some stuff, but I think it’s easier because you can run more drills that don’t involve as much contact as they used to be when you’re going head across the body and all of those different things. Even today, in team takeoff, we had tackling circuit where we were working on angles and tracking and positioning our bodies with proper leverage to make those tackles that we are about to make on Friday. I think it’s easier. Obviously, people can see it differently, but I think it’s actually easier.

Eric Allen, nyjets.com: What have you thought of the kicking battle to date? And what changes now as far as games?

The only thing, and I think I said this already, but fans – don’t get mad. There are going to be some fourth downs where we send the kicking unit out instead of going for it. It’s for a reason, to see where those guys are at. It’s a really good opportunity. We’re going to have some opportunities to kick some field goals here in the next three games. It is neck-in-neck. They’re both doing a really nice job kicking the ball, and hopefully we get some opportunities for them to do it in the game.