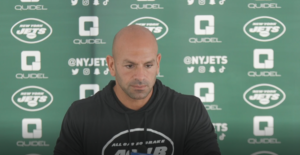 Zack Rosenblatt, The Athletic: How do you think the first day of pads went?

It was really good. The guys did a great job of working with one another. There was some good contact and came out healthy.

Connor Hughes, SNY: How would you assess where the offense is right now?

It is a good question. I think it is way too early to say anything. They’re not done installing the entire system. I love that we are operating with less mistakes than we were a year ago at this point, at the same point this year as we were a year ago. So, it’s just a bunch of new faces trying to work together, but at the same time I’m really pleased with where it’s at.

Brian Costello, New York Post: The last period, the competition period, it looked like the first team did not do very well, including Zach (Wilson). What were your thoughts on that period?

I thought the defense was on fire. Go the other way with it. I’ve spoken about Jordan Whitehead, first play of that scrimmage he does a great job with pre-sap communication. Shoots his gap, two-yard loss and it’s pretty much a dead drive from there. The defense was very precise and made it very hard on him, so give credit to them. But, second team offense and third team offense did a good job moving the ball a little bit, but it was a good first day of competition.

Connor Hughes, SNY: You guys have talked a lot about the ways you’ve seen Zach different this year and a lot of it’s off the field and things that we can’t see. Is there a point when you expect those off the field things to translate to on the field success?

I think it has. From a practice standpoint we are under a microscope for every little thing that all the quarterbacks do. Some of it’s good, some of it’s bad. When we get to games and when we get to scrimmages and we get to the inner-squad practices and we get to the preseason games, I think people will see that he’s taking a step and dissecting every play by him play in and play out. I think it’s, especially in this market, a very difficult thing to live up to, but at the same time, he’s already taking those steps. I think he’s gotten a lot better and I think in due time people are going to see it.

Mark Cannizzaro, New York Post: With the coordinators, can you speak to the importance of the continuity of these guys being obviously with you but with this group that was here last year, how much can that help you guys moving forward?

I think continuity is always so darn important. From a continuity standpoint, the longest tenured staff’s usually the deeper you are in your tenure, the more, the better you are as a football coach because you know all the snakes in the grass of what you are trying to coach. Players are familiar with what you are trying to say, so the familiarity is so important because you can coach with so much more precision. And just in that first competition period, Mike (LaFleur) being comfortable as a play caller, trying to get the offense going on third down, goes no huddle, and you saw the defense scrambling trying to get back. It’s really cool to see their personalities take shape on both sides and what they’re trying to get accomplished. Every day that they’re here they are only going to get better.

Al Iannazzone, Newsday: Having Kwon (Alexander) here now a couple of days and then having him here today in the team drills, what have you seen from him? How do you think he can help?

He’s in great shape. He’s got great recall of what we did in San Francisco and obviously, there’s some new things that we are doing here. He is a quick learner and very instinctual. You guys saw, I think he made a play in that last period and he did what Kwon (Alexander) does and made sure the other side of the ball knew about it and brought everybody to life. He’s a pleasure to be around, he is A+.

Brian Costello, New York Post: Were you surprised, Robert (Saleh), that you guys were able to get him (Kwon Alexander) out there as quickly? I think usually you guys have a long acclimation period.

Yeah, I wasn’t expecting him to be in the shape he was, or he is. He’s ready to roll.

Zack Rosenblatt, The Athletic: You were rotating a couple guys in there for George (Fant) during team drills, how do you feel about your depth at that spot right now?

We feel good about the guys we have. Obviously, we drafted Max (Mitchell), we’ve got (Conor) McDermott from a year ago, we’ve got Chuma (Edoga), obviously Grant (Hermanns), and I’m sure I’m going to miss someone. We have a good group and they’re getting valuable reps with George (Fant) not being here, which is awesome because that experience is going to help them get even better. We like where we’re at, obviously we still have to get a lot better, but we like where we’re at.

Brian Costello, New York Post: Did you hear from the league office about your comments on Saturday about the guardian caps?

Connor Hughes, SNY: Is there anything you can, like coaches collectively, do to potentially, if others feel the same way, voice it, come together, and approach the league instead of just you just being on an island?

In regards to those caps?

Connor Hughes, SNY: (follow up), Yeah, in regards to the caps and the potential problems?

I think one thing that the league does a great job of is that they are very open to the feedback, comments, and suggestions. They take all kinds of emails, and they’re always talking. They’re always talking to the players and the coaches to get thoughts. They put a lot of work and a lot of research into all these things and at the end of the day, more so than not, the league is usually right with the decisions that they make.

Rich Cimini, ESPN.com: How would you assess Jermaine Johnson at this point? For a first-round pick, he’s in a deep rotation where you have so much depth at defensive end, so maybe he’s not getting as any reps as a typical first round pick would. How does that impact him?

We like where he’s at. It’s the first day of pads. He’s got all the athleticism in the world. When you come from college, you come from all of this no huddle stuff, so you’re not used to the strain and the intensity at which you’re asked to play in the league, at least in our front. So, rotation is necessary, but the one thing we want to see when we get pads on is the power aspect of his game. He’s got all the fluidity, he can work an edge, he’s got great hand-eye-coordination, he can do all that stuff. But, the best way you win in this league is by running through people and you can’t really do that until you get pads on and as he works that part of it and gets better at it, it will open up the rest of his game. He’s got a long way to go but we like where he’s at.

Connor Hughes, SNY: Can you talk a little bit about Jacob Martin? I think he’s a guy that we haven’t spoken to you a lot about because of the other moves you’ve made with the defensive linemen, but he seems to be out there quite a bit.

Yeah, really excited about Jacob and what he brings just as a football player, not just a pass rusher. His special teams value, his ability to do multiple things, the role that we think we can carve out for him, he is a really cool football player. He stands for all the right things, couldn’t be happier that he’s here.

Brian Costello, New York Post: Looked like Tevin (Coleman) was doing some running on the side there, is he close to returning?

Yeah, he’s close, so we should get him back this week. Hopefully sooner than later.