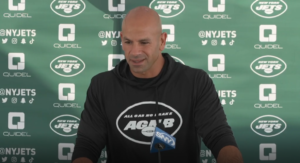 Connor Hughes: Towards the end there, Quinnen (Williams) walked off the field?

He got hit in the throat, he’s alright.

Connor Hughes: Now that you’ve had a couple days with the guardian caps on, what are your thoughts on them?

The guardian caps – I do think the spirit of it all is really good. I think it’s got benefits. I think I read on pro football talk that it was on – Nathaniel Hackett was talking about it – it’s really good for the quarterback, on the follow through it protects his hands which is cool, but I do think there’s balance in everything. Too much of anything is a bad thing. I do think because of the soft blow, it’s lending the players to use their heads a little bit more. I do think that when the first time that they take it off – anyone who’s played football knows that the first time you take your helmet off or you hit with the helmet or you have a collision, there’s a shock. I do think that if you’re waiting until the first game for that shock to happen, I don’t know, time will tell. It’s just interesting with those guardian caps and what exactly are we trying to accomplish.

Connor Hughes: It sounds like there is some concern with them?

I am because I think there’s an acclimation period that is needed for actual pads for what they are actually going to use in the game. So, if you’re waiting until the game to actually feel that, I think it’s just going to be interesting to see what type of feedback we get from players.

Connor Hughes: Aside from talking to us about it, do you plan on going to the league?

That’s something for the players. Like I said, that’s more player’s union and all of that stuff.

Rich Cimini, ESPN.com: Have you heard any feedback from players?

No, not really. I think that we will get some once we get the pads on, but nothing really.

Zack Rosenblatt, The Athletic: Garrett Wilson made a couple of acrobatic catches today. How much of his skillset is to go up and get a ball?

He is very, very athletic. He’s got unbelievable body control and power. He’s got great hands. He’s explosive in and out of his breaks. He’s very wiggly in and out of his breaks. He is talented. Obviously, there’s things that he’s going to have to learn as a rookie, especially with moving around in our offense, but at the same time, we’re really excited about him and the direction he’s going.

D.J.’s pretty good. He’s pretty good. I’ve got to see it again because I was on the far side. I just know he jumped it, but it’s no surprise. If D.J. sees things a couple of times, he’s going to find a way to take it.

Mike Kay, Pro Football Network: I know there is very little contact, but what have you seen from Breece (Hall) so far?

Same thing you saw in college. He’s got great patience as a runner. He’s explosive once he hits that second level. Again, we get pads on Monday – not that it’s going to change much because we’re not bringing guys to the ground. Just to see if the style of running changes, especially with how tight the gaps are here in the NFL. He’s been doing a nice job.

Al Iannazzone, Newsday: What do you see from Sauce (Gardner) so far that gives you confidence that he can play and play at a high level?

He’s long, explosive. He strains in and out of his breaks. He is a sponge and just learning and collecting all kinds of information. We had a really cool rep and Michael Carter said it when he was running back, it was in the red zone, caught the ball in flat, turned up. Then it was Sauce, him, and I believe a linebacker at the three yard-line. It was a moment of truth. Those are the moments that are going to come to fruition over the next three weeks for him, and really all the rookies for the first time they have pads on.

The entire rookie class, they’re very competitive. Obviously, everyone wants to do their best. You want to make those plays, you wanted to be counted on when the ball is in, when the ball is elevated, when it’s going to be one of those cool catches, you want the quarterback to have confidence that he can put it in certain spots, and you want to show off your range, and I know he wants to make those plays not only for himself, but for his quarterback and his team. I love his mindset and the direction he’s going and how important this game is to him. It’s why guys like him always succeed. It’s why guys who love football succeed, because everything means something to him.

Rich Cimini, ESPN.com: A year ago we were asking a bunch of questions about how come you don’t have a veteran quarterback backup. So, now you have (Joe) Flacco, and it looked like he had a pretty good day today. Why do you have him as opposed to last year and what’s it like having him as veteran insurance?

Joe, he’s a world champ, right. He’s had so much success in this league, he knows how to prepare, he knows what defenses look like. He’s just got a way about him. I’ll stand by it, it’s not his job to mentor or coach anybody. His job is to come out and play, but I think by the way he goes about it, his business is really beneficial to what we have and that’s a very young football team. Not only for Mike (White) and Zach, but also for other positions. He’s a guy that guys can lean on. I think he’s been to 15 playoff games and a Super Bowl. He’s a pro’s pro, and he does things the right way. He’s not a closed book, he’s very open to conversation and giving knowledge, you just have to be willing to ask him.