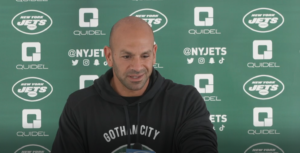 I believe so, there’s a couple things, but it looks good so far.

Connor Hughes: Can you share the thought process of adding him?

Yeah, obviously he’s another veteran to add to that young linebacker group. He’s a ball of energy, great leadership. Can play both Will and Sam. Love him. Obviously, we have the history in San Francisco, but he’s a special young man.

Connor Hughes: Where do you view him on the defense? Is that a depth signing where if something happens to somebody out there?

We’ll see where he’s at. He obviously wasn’t here for OTA’s. We’re going to work him up the next two days, today and tomorrow, and just see where he’s at so we can set a schedule for him next week. But no expectations except to do what he always does, which is bring a lot of juice, lot of energy, plays his absolute tail off, and we’ll let day by day go and see where it ends up.

Brian, Costello, New York Post: Is this something you guys have been looking at for a long time now?

Yeah, we had the visit and obviously he’s had a lot of different visits along with it. It was something that he had to make a decision for him and his family and thankfully he decided to come here.

We’ll see, again it’s day by day, I’m not going to put a number on it. Hopefully some time next week. Once we get pads on, I’ll start mixing him in there a little bit. But he looks good, he’s going through everything, he’s getting treatment, and he’s doing basically everything except for the team stuff, which will come.

Zack Rosenblatt, The Athletic: How would you evaluate how these first three practices have gone?

They’ve been good, the guys have been working. For me, it’s about effort right now. It’s playing fast and understanding you need to learn how to practice without pads because you practice without pads during the season and the objective is to play as fast as possible. It’s been good. We’ve gotten better every single day and we’ve got a good chance to finish tomorrow’s, which will be the last day on the block.

Rich Cimini, ESPN.com: With Sauce (Gardner), what do you need before you make that final decision on him starting?

That’s a good question, I think it’s one of those “you’ll know when you know” but him and Bryce (Hall) are alternating days in terms of getting the reps and getting a feel for going against different receivers and they’re both getting those opportunities. Both are doing a really nice job competing and helping one another out. He’s doing a good job, we’ll know when we know.

Brian Costello, New York Post: Do you sense, even earlier on here, a higher level of competition during practices?

Heck yeah. I told Joe (Douglas) the other day, the greatest motivator is competition. Competition is the greatest motivator, however you want to word it, but that back end, you add DJ (Reed), you add Sauce, and (Jordan) Whitehead, and LaMarcus (Joyner) is back. Just the entire group is elevated, Will Parks, and you got Ashtyn (Davis), I’m going to miss someone, but either way, and there’s still (Brandin) Echols, he just got back into practice. So, there’s a lot of competitive action back there where guys are pushing one another. It’s not malicious, it’s not combative, they’re still teammates and they’re working together which is cool. The d-line, we have a plethora of really good d-linemen. The shame of it all is you’re probably going to end up having to release NFL players. That’s a good thing though, at the same time with regards to the roster. But right now, they are all just competing and giving it their best shot and we’ll see what happens.

Brian Costello, New York Post: (Follow up) How about offense versus defense right now? I see it going down to the red zone and getting pretty spirited.

It was just a four-play sequence down in the red zone. It was 2-2, so we gave it a two-point play at the end. That’s kind of the situation that you guys saw. But, any time you can get in a competitive nature, they love it, and coaches love it. You always want that purpose. It gets heated, especially when it goes the fourth day in a row. You get sick of seeing each other, it’s going to get heated, it’s going to get competitive, but it’s fun.

Al Iannazzone, Newsday: How does Carl (Lawson) look? I know you guys said you have to protect Carl from Carl, but how has he looked so far coming back from what he went through?

He looks good, excited for pads. He’s stout. He’s powerful. He’s got all his movement. I think he has full confidence in his lower half. He’s Carl. We reeled it back a little bit today for him, which he was not happy about. But, regardless, he looks really good.

Kris Rhim, New York Times: Do you think with the offensive weapon’s you have added, Mekhi (Becton) back to the offensive line, do expect Zach (Wilson) to take a step this year?

I think he already has. I think Zach will be a lot better, but at the same time we are a very young group. So, we’ve added guys, but it’s a young group. You’ve got a rookie. You’ve got a second-year player. Obviously, Corey (Davis) is there and Braxton (Berrios). You got Jeff (Smith) and (Denzel) Mims and a couple other guys. The backfield is young. It is a young group, but at the same time what is going to be fun is watching this group gel together and create its own identity. Obviously, we have some good players and they’re all going to grow together. Aside from all of that, I thought Zach did a really good job in the offseason. He’s continued in the first week.

Kris Rhim, New York Times: (Follow up) He talked about gaining some weight. Is that something you asked him to do?

No, players know what they can and can’t do and where they need to be. A lot of times when you see that first or second year maturation, a lot of guys reshape their bodies. They get to an NFL program and have an NFL diet and they have money in their pocket. They’re not eating ramen noodles all the time. They just naturally get bigger. His family, they’re a bunch of linebackers and then there’s him. So, he’s in a good place with his weight.

Consistency. Trust, to do his job, to protect the quarterback, to get lined up, to get the strain play in and play out. That’s the biggest thing. That’s all you want out of a player. That’s the first thing you want out of your players is trust. He is athletic. He can do a lot of different things, and he can do all the different things that we want him to do. He went out in that left tackle spot and he didn’t give up much in pressure and was good in the run game. So, that’s what opened up the discussion.

Justin Waters, WPIX: Last year Elijah had a lot of flashes during training camp and certainly showed that throughout the season. What’s the next step for him as a wide receiver?

It’s the same thing as everyone else. Focus on the things you have control over. I know it’s cliché, but if you start putting expectations on yards and catches and all of that stuff, you’re missing the big picture. That’s finding ways, keeping grinding, keep finding ways to get better, honing on your craft and all the different things that you do have control over. I think Elijah is wired that way. You want him to master the playbook, which he has control over. You want him to master the precision of his routes, which he has control over. As long as he’s always aiming to do that, I think he will naturally do better and the production will come.

Justin Walters, WPIX: (Follow up) If you’re leaning on competition being the best motivating factor, how do you think that group together can get the best out of each other because they’re so many playmakers?

There are. The next step to competition being the best motivator is that you got individuals who are internally and externally motivated. So, when you look at a guy like Elijah, he doesn’t care who’s surrounding him. He’s going to give everything he has all the time. But the overall group, it is a competitive group. They’re competing to make a 53-man roster, which is healthy.

He looks good. Today was a really good day for him. We just had a small talk as we were walking off. It’s not getting easier, he’s just getting stronger. Today, I thought, was a really good day. He’s got to continue to strain himself and push himself to the brink of exhaustion and trust that that uncomfort is going to be what helps him get better, and I thought he had a good day today.