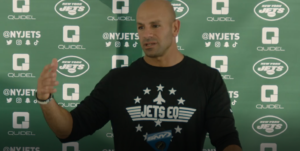 Corey Annan, NJ Advance Media: What have you seen from these first few days on both sides of the ball?

You put a lot with regards to precision, knowing your job, straining the conditioning aspect of it. Like I said, it’s an acclimation period so you’re building yourself up to get pads on, so you can roll. There is still a lot of value in this in terms of the hitting, o-line, d-line stuff, it’s a way from pads.

Corey Annan, NJ Advance Media: Has Zach (Wilson) been looking different to you?

No, he looks like he’s the same, he’s progressing, he’s comfortable back there, he’s working through his progressions, getting the ball out on time. I think his arm talent is undeniable, so when everything clicks for him he’s pretty good.

Dennis Waszak, Associated Press: I saw Zach running around there a lot and not forcing things as much?

Yeah, he’s playing with his internal clock going off, in and out of the pocket. He looks much more comfortable doing that than he did a year ago, so it’s a good thing.

When you get into your play action and pass periods obviously some of them are going to run a little bit deeper depending on down and distance because there’s a third down period in there. Yesterday we were in the red zone so you don’t have as far to go but it’s a combination of both.

No, we are just working with him. He didn’t have any OTA’s and he’s been working through different things, but he’s doing all the walk throughs, individuals, group installs, he does everything else.

Connor Hughes: Is that contract related?

No, I think if it was contract related he wouldn’t be showing up here yet.

No, just same thing, we are just working through some stuff with him too. Same deal.

Brian Costello, New York Post: Did he have surgery?

No, he didn’t have any surgeries.

Zack Rosenblatt, The Athletic: Can you talk about (CJ) Uzomah and the impact he can make in Zach Wilson’s development?

Yeah, just that entire tight end room, I’m going to throw (Tyler) Conklin in there too and (Trevon) Wesco and the guys who were here a year ago, but CJ brings a tremendous amount of leadership to the group and obviously he’s a big body, he’s got size, plays physical, he’s really good in the run game.  Really excited about that tight end group in general and all the different things that they can do, all the different qualities they bring to help bring different things to the table.

Connor Hughes: Can you talk about Bryce Huff and him as a player?

Yeah, last year when we got to OTAs he was one of those guys who absolutely remade his entire body. He changed everything that he had his rookie year. He’s working into his third year now. He is a really, really good pass rusher. He knows how to win one-on-ones. When he was fully healthy a year ago, we were pretty darn good up front and he’s a good player. It’s his third year now so he’s even more comfortable, he’s stronger, he understands, he’s year two in the schemes. Excited about him, excited about the things that he brings to the table too.

Zack Rosenblatt, The Athletic: It looked like Mekhi (Becton) was walking a little gingerly out there today. Is that conditioning and getting back in?

Brian Costello, New York Post: How do you define success for this team?

It goes back to, I’m sorry to be cliche, I think obviously everyone has, every team has goals, everyone knows the Super Bowl is everything right. Playoffs, winning football games, Super Bowls, we all get that. I think that’s obvious. If that’s not part of your overall long-term goal, then what are you here for? But, you have to be disciplined enough to bring it back to what gets you to those moments and what gets you those moments is the every day process. Staying focused on the things that you’ve got full control over. Dominate your moments, go to bed better than when you woke up. If you do that, you’ll trust results that happen. So, really the things that we talk about from a success standpoint. I’ll leave it all for you guys to judge, but for us it’s about dominating the day, getting better every day and finding ways to get better every day.

Brian Costello, New York Post. CJ (Uzomah) was quoted talking about playoffs. Braxton Berrios said the season is a failure if you don’t make the playoffs. How do you view that kind of talk?

It’s the same thing, back in 1993, I know it’s high school, we won the state championship in football, and part of our battle cry was “dream it, believe it, achieve it.”  Opposing teams were calling us the The Mighty Ducks just making fun of us. So, we had this big thing “dream it, believe it, achieve it” and I do believe it. I think great things happen when you dream, but at the same time you’ve got to have the discipline to reel it back and understand how the dream comes to fruition. What is your daily process, how are you making that thing happen? What are you doing in the moment to make your dreams come true? And guys like them understand the process. They understand what it takes, they’ve been on teams that have had a lot of success, especially CJ. I’m not too worried about them talking as long as they know how to bring it back and I think they do.

Corey Annan, NJ Advance Media: Is it more important to practice how you play or share the wealth when it comes to reps?

That’s a good question, when he’s going off schedule the timing of the play is over so everyone’s actually gotten the rep and now he’s working off schedules so now there’s the second play. The second play within, I’ve said it before, there is no defense for a second play when the ball is snapped. It’s why guys like Josh Allen, and Patrick Mahomes, and Russell Wilson, and all those great off schedule quarterbacks are so hard to defend because you defend a play within rhythm and then after that it becomes street ball. If you have the ability to do both, like those guys do, you become a very dangerous individual. So, getting the practice and going off schedule is the receivers tying into Zach’s movements and which way when he exits left, exits right, exits through the middle. Whenever he exits the pocket and goes off schedule there is a play within that. Coordinating that, there’s a coordination to it, so to answer your question, everyone’s still getting a lot of work when he does go off schedule.

Al Iannazzone, Newsday: What does it mean to have Corey (Davis) back?

Veteran leadership. Him and Braxton (Berrios), they’re two veterans, they do things the right way. It’s a very young group that we have over there with the receiving core, but to have him back, and he’s in such a good mental head space right now. His body feels good, he feels good. I’m excited for him because you say what you want about his season last year. I think he has a tremendous mindset to attack this season and try to maximize everything he’s got.

Zack Rosenblatt, The Athletic: What has been your impression of Breece Hall so far?

He’s good, he’s very smart. Obviously, he’s a rookie so there’s things that he’s still learning with regards to practice habits and developing a mindset to score every single time he touches the ball and I think that will come natural to him. He’s a good young man, he’s very smart, and I’m excited for pads to come on from a physicality standpoint to see where he’s at there. But, so far so good.

Brian Costello, New York Post: How difficult is it to develop run game and plans before the season?

I think it is a little difficult because you’re not in pads right now. When I first got in the league there was still three a days, and there’s no water breaks, and every practice was 80 plays, and you went for it. But you’re not getting nearly as many plays as you got in, you have to do it a different way. You have to be creative with your walk throughs and your group installs, and how you’re teaching it. I think we do a really good job with regards to the x and o’s aspect and getting our guys to understand what we’re trying to get done throughout the entire day. The physicality part is where you try to catch up because you lose some of those live reps. But, other than that it’s an adjustment but it’s not holding anything back.

That is a challenge that I think is the biggest thing is that you have this acclamation period and you do scale down and it’s a mindset. It’s an absolute mindset that back in the day you had 80 plays, players would use training camp to get themselves into shape and now you’re in an age where you kind of acclimate so you’re monitoring reps and you’re monitoring workload, under the assumption that the players are going to step on the gas and go a hundred and ten miles per hour every single play. So, it’s a coordination between player and organization in terms of, trust us with the load, but we have to trust that you are on the gas every play and you’ve got that mindset to give yourself and to push yourself further than you’re willing to go. I feel like our guys do a really good job with that, we’re very young, got a lot of energy, and I feel like our guys are pushing the best way they can.

He’s a big body and you know with our offense, we line up everywhere. Mike does a really good job, him and his staff do a really good job of trying to move guys around to make sure they create mismatches. His ability to do all the different things that we ask him to do is really a benefit. But, if you have a bunch of guys that have the same skill set there’s really no point in moving guys, they’re all the same. But to have a big guy, and then shifty guys, the different variety that we have at receiver allows Mike (LaFleur) and his staff the creativity to move guys around, so having his skill set is a bonus.