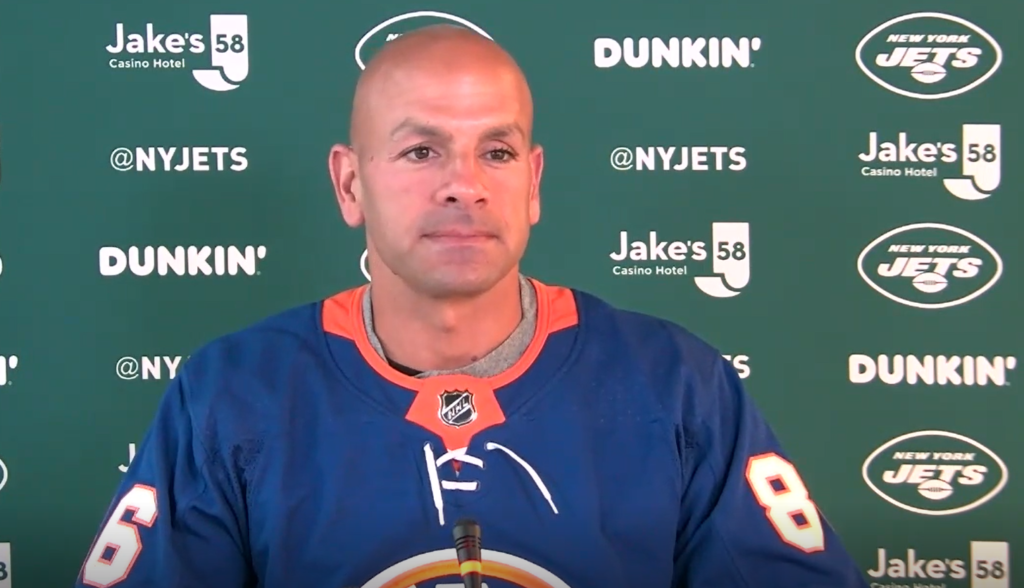 DJ Bien-Aime, New York Daily News: Robert, Jeff last week spoke very highly of Jarrad Davis. He said that he’s flashed a lot throughout the offseason. What have you seen from Jarrad so far?

There’s a comfort level that everyone’s got to get into with regards to a new scheme, new coaches, new techniques, it’s really a new ask, if you will, in terms of what they’re being asked to do. Especially at the linebacker level, what we do on defense is so different than what other linebackers do around the league. He’s been doing a really nice job with regards to absorbing the information, all of them really, C.J. (Mosley) included, and embracing the coaching, the tape, the drill work, all of it. They’ve incrementally gotten better this entire OTA.

Darryl Slater, NJ Advance Media: Robert, this is the ninth practice here now, by my count, for Zach (Wilson) and obviously your whole team. What have you noticed about Zach that you didn’t know going into these practices? You knew a lot about him before, coming out of the draft, but what has kind of maybe revealed itself to you?

We’re still learning, I’d love to give you an answer on that one right now Darryl but, there’s going to be so much more to learn, and your best learning comes through adversity and conflict. Obviously OTAs everything has been feel good, everyone’s excited about everything that’s happening around the organization, until we actually hit adversity will we be able to learn more about each other and how we handle things. I’d shortchange you if I was to give you an answer now.

Brian Costello, New York Post: Robert, we haven’t seen Ashtyn Davis at all. Is he here, is he injured? What’s his status?

Ashtyn’s here, he’ll be ready for training camp. He’s still working through his injury, he’s in meetings, he’s going through all that stuff. We’re excited to get him on the field so we can work with him.

(follow up) Is that the injury that ended his season last year?

Al Iannazzone, Newsday: Robert, what have you seen this week from Carl (Lawson)? And what kind of impact do you expect him to have for you guys?

Carl, we’re calling it an acclimation period for him. He hasn’t gotten any reps, obviously. We’ve been going through individuals, having him work with the performance staff, more of a body maintenance thing. We’ve done it with everybody that’s been here, they’ve all had one week of acclimation. Our expectation of Carl is no different than anybody else, with regards to going out there and doing everything you can to be your absolute best. The film room, the training, regen, practice habits, game habits, all of it, to just play at the best of your personal ability and whatever the results are we’ll live with them. We trust with Carl those results will be good.

Connor Hughes, The Athletic: Robert, I know you had mentioned when this offseason program originally began, the desire to see some of the young corners play, and see how they might pick it up before adding a veteran, or potentially adding a veteran. With only one more day left of OTAs, how would you assess that position?

They’re growing, obviously it’s a learning curve. With Coach (Gregg) Williams a year ago, there was more of a Cover Two base, while here, we’re more single high based. They’re being asked to learn completely new techniques, and play into the style that we play. Everyone’s different, doesn’t make anyone wrong or right, it’s just everyone’s different. It’s an opportunity to continue to grow, they still have two more minicamps obviously. From there we’ll sit down, we’ll reassess, see where we’re at. As of now, the focus is on them.

Brian Costello, New York Post: I think it was Woody Johnson that tweeted a video of you at MetLife, in the last few days. Did you visit the stadium for a reason? When was that?

It was yesterday. Had an opportunity to get out there. It was really just to go through a walkthrough, anything that we may or may not want to add or take away to create a better gameday experience, not only for the fans but our players. It was an awesome experience. I got to take the kids over there, which was good for them, they were excited, they got a free day out of school. It was great, it was awesome to be able to go there. Can’t wait for the fans to fill it up.

Yesterday, we walked out of the tunnel and they blared it on the speakers, the Jets chant. I’m not going to lie to you, I got a little bit of goosebumps. I’m really excited to get it going and get that stadium to where it becomes live again, like it’s been in the past.

Rich Cimini, ESPN: Robert can you describe for us how minicamp will differ from what we’ve been seeing in OTAs, and what you hope to get accomplished?

We’re not going to do anything different. I know we get more time with the guys. The only thing we’ll probably add is a little bit more to the walkthroughs, just so we can go through all the different scenarios, all the different situations that you don’t really work through in OTAs. Like goal line, stuff where the contact gets a little bit heavier, we’ll go through a walkthrough setting and just create situations, hail mary, all the plays that happen once or twice a year. Just go through that checklist. That’s basically the difference. Otherwise, the practices will be the same.

Connor Hughes, The Athletic: How far along are you in both the offensive and defensive installation, to this point?

To this point, obviously, the main installations are done, they’re installed. Now, the gameday installation, and what happens on gameday, the different nuances that’ll start coming once preseason games happen. There’s a teaching progression, so, the entire offense and the entire defense are not in, but the teaching of our techniques, and the teaching of our fundamentals, and the process at which we do things, those have been installed. Right now, they’re just out there practicing and they’re on repeat.

Connor Hughes, The Athletic: The one guy who has flashed, at least throughout the practices that we’ve been out there, is Elijah Moore. Obviously, I know you’re a defensive guy, that’s kind of where you’ve made your money, on that side of the ball. When you’re trying to defend someone like that, how challenging is that, what does he do that makes it so difficult to cover? It seems like you guys, defensively, are having a bit of an issue with that.

He’s a dynamic young man. One of the things that’s really been great for him, not that it’s been a surprise, but to see it actually happen, what makes those guys difficult to defend is he can line up as Z, F, or X. He can line up wherever you want, and he’s going to execute it at a very high level, even though the routes might be a little bit different, the stems might be different, the releases might be a little bit different. He’s showcasing his ability to be as versatile as possible, in terms of being at different parts of the field, being at different positions, understanding what needs to get done so when the ball gets to his hands he can still do what he does best, and that’s run after catch. That part is what makes it very difficult to defend those types of players, and we’re excited to have him. His work ethic is off the charts. His mindset is off the charts. We’re excited to continue working with him so we can see him get better.

Daryl Slater, NJ Advance Media: Robert, when you we’re talking about going to MetLife Stadium, you mentioned changes. Anything that you’ve decided on that would be added, changed, or what you noticed there?

No, I don’t know if it’ll be anything noticeable to the naked eye, just things to make it more home, let’s put it that way.

Rich Cimini, ESPN: Robert, do you expect Jamison (Crowder) next week at the minicamp?

Yeah, with Jamison, obviously he’s going through all the discussions with Joe (Douglas) and that’s going to always go back to Joe’s book. It’s minicamp, everyone’s welcome, obviously, if he’s here. I haven’t had a conversation with him on it, if he’s here it’ll be awesome to have him here.

Daryl Slater, NJ Advance Media: What is your sense on how close that situation is to being resolved with Jamison and Joe coming to a consensus on where that will go?

Joe and I haven’t had a discussion on it. I wouldn’t be able to answer that for you, right now.

Brian Costello, New York Post: Do you expect everyone to be at minicamp?

No, we’ve exchanged texts here and there but nothing of substance.

Brian Costello, New York Post: Robert, we talked a lot when you were hired about you being involved in all three phases and overseeing the whole program and not just being focused on one side of the ball. Was wondering how that’s gone for you this spring? How involved have you been with the offensive installs and things like that? How have you divided your time? What has that been like for you, as a guy who’s been on the defensive side of the ball a long time?

Like everyone, it’s our first OTA, first time for me too, right? There’s always going to be some things, there’s going to be things I revisit here in the next 40 days and adjust the way I’ve approached things and see if I can make it better. The adjustments been awesome, obviously, even as a defensive guy you still study the heck out of offense, especially with our scheme that’s everything is to understand what’s happening to you. It’s not foreign to know what they’re being asked, especially I’ve been very, very fortunate in my career, I think 12 of my years have been with teams who run this Shanahan system. To be able to sit in those meetings when I was younger, and to be able to ask all those questions and be a part of the installs, it’s not the first time, it’s just the first time I’m actually speaking about it. All of it has been fantastic, special teams has been fantastic, To be able to go through those and tie it all together with the messaging of what we want done and how we want these guys to play to the best of their ability has been a great transition, like I said I’m going to reevaluate and see if I can make it better.