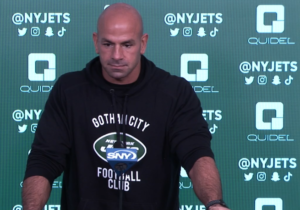 Brian Costello, New York Post: Robert, obviously there was a lot of talented receivers in this year’s draft. There was a run on them right after you guys picked Garrett (Wilson). What was it about Garrett Wilson that stood out to you guys?

He’s got, obviously aside from mental makeup, he’s got tremendous body control, range, great route-running ability, he’s got great versatility, he can win those one-on-ones that we talked about yesterday in man coverage and when teams are up there in press. Obviously, there’s going to be things that he’s got to work on like every rookie does, but really excited to have him and the versatility that he’ll provide.

Al Iannazzone, Newsday: Talk a little bit more about mental makeup, what stands out?
One, his ability to absorb information and playbook, his drive to be great, the tenacity that he plays with on the football field. When that ball is in the air, it’s his. So, it’s just all-encompassing in terms of the way he’s wired.

Ralph Vacchiano, SNY: Does size of a receiver matter? You have smaller receivers obviously on the roster with a lot of explosion, but do you feel like you want a bigger receiver or does that not make a difference?

Obviously, they come in all shapes and sizes. I’m not sure what Stefon Diggs’ size is, but a lot of it has to go with that mental makeup. A lot of guys play bigger than they are, a lot of guys play smaller than they are. You got big guys who play small, small guys who can play big. What I think separates him is that he does have tremendous body control and range with regards to his length and all that stuff. He plays bigger than his measured size.

Connor Hughes, The Athletic: When you look at the, I mean he’s kind of similar in size and similar in play style a little bit with Elijah (Moore) and also their flexibility where Elijah can play inside/outside and now Garrett can play inside/outside. So, how much flexibility does that give Mike (LaFleur) when he’s deploying the offense to kind of keep defenses off balance? It’s not necessarily an, “Oh, this guy is an outside, this guy is inside,” you have a bunch of guys.

Dennis Waszak, Associated Press: Robert, with Micheal Clemons, when we talked to him yesterday, he seemed pretty intense, like we know what he’s like on the field. When you first talked to him, do you remember like sitting down and talking and what were your impressions of him? He comes across as a guy who loves being out on a football field, like an animal.

He’s intense. He loves ball, I will say that, he absolutely loves ball. When he puts a helmet on, he goes to a very dark place, and it reflects in his play and the effort and the violence at which he does it. But at the same time, he is a pleasure to be around, great conversation, really excited and looking forward to working with him and just seeing how he grows and gets along with his teammates. He was voted captain at Texas A&M, so he’s well-liked by his peers. He’s a very exciting young man to have been able to get when we got him on day three.

Connor Hughes, The Athletic: How important are getting players like that? It seems like, on the field, he seems like a scary dude. So, I mean how important is that to put a player like that on the field for your defense where you’ve got a little bit of nastiness?

The biggest thing, the common denominator to all of it is just a love for football. You guys have heard me say that a lot. He loves the game, and a lot of guys that we brought in just absolutely love the game and so they play at a level of intensity and a level of intensity that is more than most, when you have that love and desire to play this game, and he’s got it. Not to take away from the guys that we’ve brought in since whether it’s free agents, the guys that we’ve kept, the guys that we drafted, have this love for football and they may not come off as imposing as he does, but they play just as hard. Filling this roster and locker room with guys who love this game and will put everything on the line to protect it. I think he kind of exemplifies that in one foul swoop.

Al Iannazzone, Newsday: Do you have other guys who go to a dark place when they put a helmet on?

I think they all do. (Clemons has) got that deep voice, big, long arms. The draft call was awesome.

Connor Hughes, The Athletic: What was the draft call like? Did he take a long pause? He was giving us long pauses yesterday.

I was like, ‘Damn.’ Just talking to him, he is straight business, for sure.

Brian Costello, New York Post: Will (Jeremy) Ruckert be able to do much this spring with the foot injury that he has?

We’re hoping so. We’ll see where he’s at again next week to see where we can get him as we get closer to phase three. I know he’s working through it. He’s feeling good, it’s just a matter of continuing to rehab and all that stuff.

DJ Bien-Aime, New York Daily News: Across the NFL, a lot of quarterbacks that have succeeded they’ve had weapons around them. So, how important was it to get an explosive weapon like Garrett Wilson for Zach Wilson’s development?

Connor Hughes, The Athletic: No cliché or coach speak answer with this one. Of the tryout and UdFA guys, has anyone stood out to you?

Not going to throw names out there, but there are definitely four or five guys that really, really stood out and are definitely going to be a discussion here over the next day with regards to getting on this 90-man roster.

For sure, this was just an introduction obviously for them. Tomorrow, again, finishing out the weekend. Really, this next week, obviously they won’t be with us this week, is to understand there’s a level of conditioning that they still have to catch up on. So, utilize this week, come back for phase two, it’ll be the last week of phase two, utilize that week so they get a good two and a half weeks’ worth of work because phase three we’re repping plays and the speed that they’re going to see. These guys have been working now for however many months and the GPS numbers that we’re getting from our guys, they’re hitting stride. So, for them, if they don’t want to play catchup the entire spring, they’ve got to get in shape. That’s the biggest thing.

Brian Costello, New York Post: Robert, the early phases of the offseason program, you’re not doing a whole lot, but what are your early impressions of the way Zach has come back this spring?

Connor Hughes, The Athletic: Can you talk a little bit about the decision to let Greg (Van Roten) go yesterday and was that just strictly financial, is there a chance he could come back at a lesser deal? Can you just talk a little about that?

Just talking to Joe (Douglas), I’ll let Joe talk about all that stuff with regards to the latter part of your question. In all seriousness, GVR (Greg Van Roten) is phenomenal, phenomenal man, really appreciated time with him. It’s not over, just talking to Joe, we’d love to have him back as the offseason goes. GVR has a place in this league and there’s opportunities, I think that he’s got starting opportunities at a few places. Just talking to Joe, just thought maybe give him that opportunity to see if he can get somewhere to compete for a starting job and all that. But at the same time, the door is not closed here, we’d love to have Greg back.

Al Iannazzone, Newsday: Where is Carl Lawson in all this? That’s a tough injury to come back from, what are you expecting from him when you get to OTAs? Is he going to participate?

It’s all, for the bigs, it’s going to be all kind of individual. Even for the one or two sessions where we do have team pass and all that stuff, he’s not going to do any of that. For Carl, he’s still working through, but he looks fantastic. He’s sprinting, he’s doing everything, he’s ready to roll. I think he was ready to roll the second he tore it, I mean the guy is an animal with rehab, so I’m not worried about his availability.

(follow up) How much have you thought about his return? I know you’re looking at everything, but everything you were doing last year he was a big part of what was going to happen and then he gets hurt in August.

I’m excited more for him. Anytime you have an injury like that, like I told you guys, I feel sick for the player first and foremost. Not enough time to feel sorry for me, the player puts in all that work and he’s trying to show that he’s deserving of what he got in free agency and then that happens. I’m really excited for him to be able to get back to the field healthy. He’s put in so much work to get to his point where he is. I know he’s not even close to stopping and I know he’s going to put in even more work to get where he needs to go. I know how much he’s investing in the team to get players to invest in themselves so they can get to where they need to go. So, really excited for him and his road back to doing what he knows he’s capable of doing.

Brian Costello, New York Post: We talked about Zach’s physical, but mentally, how much further along is he now just having a year in the system and coming back here?

Obviously, we’ve had one week of phase two which is where we can finally go out there, do the walkthroughs and all that stuff and some group install. He’s got a really good early command of the offense and he’s doing a really good job with regards to that. There are little things that he’s doing where you’re seeing a little more security and he’s not a rookie and so he’s being a little more vocal. He looks good, he’s getting more comfortable. Obviously, grasping the offense. He’s never had trouble grasping the offense, he was a rookie, he goes through it. He’s much further ahead at this point than he was a year ago, for sure.