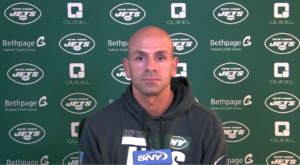 Opening Statement: I’ll start with injures: Quinnen Williams, he’s good. Obviously, we’ll limit him some in practice with his shoulder, but he’s going to be good to go. Shouldn’t have any issues. We’re expecting to get Tyler Kroft back this week, along with both Michael Carters, Bryce Huff, Tevin Coleman. Good influx of guys this week.

Al Iannazzone, Newsday: Robert, is there a chance that Michael Carter the running back will come off IR?

Both of them, so, Michael Carter, hopefully we get the nickel and the running back back. We’re expecting both.

Brian Costello, New York Post: Robert, what did Quinnen show you yesterday? That looked like, I don’t know the extent of the injury, you said he was going to be fine this week. It looked like he took a pretty good shot there at the beginning of the second half and to come back and play with that.

It doesn’t surprise me that Quinnen did. I’ll be honest, I look at Quinnen as an old-school type player in terms of just the grind and the importance and the desire to be on the football field, not only for himself but for his teammates. Just seems like this new age, they’re not built like him and it’s much appreciated for him to show that, because at the end of the day, teams that win championships have a bunch of those guys on their roster and it was good for him to show up.

(follow up) Robert, we didn’t get a chance to ask you about Elijah (Moore) going to IR. You put him on IR Saturday. It seemed like you had some optimism last week. What happened that led him to go onto IR and is there any chance he’s done for the season or do you guys view that as a three-week injury?

No, we’re still very hopeful that we’ll get him back for the last two games of the year. He wants to be back the last two games. He was obviously very disappointed that he had to go on IR. It just wasn’t responding to the treatment and it was just one of those deals where it was 50-50 at best for the Jacksonville game, and with all the injuries that we’re having, it was just better to give him that week to heal instead of trying to rush him back and we’ll get him back for the last two.

Rich Cimini, ESPN: One of the things with Zach (Wilson), yesterday we were so focused on some of the accuracy issues, but we didn’t even ask, he didn’t throw an interception for the first time all year and he’s actually cut down his interception rate over the last few games compared to the previous few. I’m wondering if you could talk a little about that and what do you think has led to that?

It’s a good observation, Rich. A lot of the things that I think he learned when just watching the other three quarterbacks operate the offense is tempo, eyes, not over-analyzing the play, it’s been his main focus and just progress through the offense and find ways when it does break down to leave the pocket and just fill the pocket. So, when you do play quarterback that way in the system, you make good decisions. Yesterday, his tempo his good, his decision making was fine, but his eyes probably got a little bit out of a whack which led to some of the accuracy issues. But as far as the decision-making aspect of it, it’s gotten much improved, showed his ability out of the pocket to extend plays and he executes the scramble a couple times which was good. He took some jumps, obviously it wasn’t where he wants to be, but at the same time, I do think with his decision making over the past couple of weeks it’s getting better.

DJ Bien-Aime, New York Daily News: Obviously before the last Taysom Hill run, it seemed like you guys were doing a good job defensively for the most part, just yards per play. How do you guys keep that momentum going, going into the Dolphins game this Sunday?

Defensively, we hit the rest button after that Buffalo game. We just said, ‘Guys, we’re going to pretend like the beginning of this season didn’t happen. We start now.’ Yesterday, that last run sucks because I think New Orleans had 300 yards, they were averaging 4.5 yards a play, took them over 40 carries to get 150 some odd yards, so they were averaging 3.7 per run which would be number one in football. And so defensively, doing a really nice job handling all the different quarterback runs, all the different things they were doing offensively. Things we’ve still got to get better at, but overall, it was 13-6 in the fourth quarter. It was 16-6 when I made the decision to go for it at midfield on fourth-and-seven, to be aggressive. I’m happy about the direction the defense is going in. DJ, it’s a boring answer, but you got to hit on repeat, keep mastering the fundamentals that we’re asking you to master, keep mastering your technique and becoming efficient and seeing if you can unlock all your athleticism and play as fast as possible.

Connor Hughes, The Athletic: Robert, when it comes to Zach’s accuracy, is there anything specifically during the week that you guys can work on with him to try to improve that? It’s weird, because when we watch him all throughout OTAs, minicamp, training camp, the accuracy issues weren’t there, so is this maybe just as simple as a mental block he’s got to get through?

Three things that we’re focusing relentless with Zach since he’s gotten back is his tempo, which is his footwork, his eyes, which is working through progression and progressing off of one, two, three, and then obviously not over analyzing what he’s seeing, which is easy to do when you’re trying to see what the coverage is, you’re trying to figure out your pre-snap indicators so you can progress faster, especially with all the different disguises that teams have, like you can kid yourself, especially as a young guy, you can get caught thinking one thing and getting yourself caught post-snap. So, just having disciplined eyes. But yesterday, we felt like his tempo was pretty good. From an eye placement standpoint, it wasn’t as consistent as it was against Philadelphia in that first half, which led to him having to speed up, slow down, reset and that always is going to lead to inaccuracy. So, those are things that we can help him with, just continuing to be relentless as it pertains to those three aspects of his football game. And you saw it yesterday, too, because the counter argument is, ‘Well, shoot, does that sound like you’re trying to build a robot?’ And it’s, no, because what I think you see as he gets more comfortable with tempo of his drop and having great footwork and be disciplined in his footwork, he’ll start to feel the pocket around him and he’ll know exactly when to exit, he’ll know his exit lanes, he’ll know how to do all that stuff and he showed some of that yesterday with his scrambles. To answer your question on accuracy, in Houston, you could point it to his footwork. I thought all of it was working against Philadelphia in the first half, and then yesterday, you can point to his eyes. Just stuff that we got to remain consistent with as it pertains to his playing ability.

Brian Costello, New York Post: Robert, when you guys faced Miami a month ago, and you made the decision to start Joe (Flacco) in that game, you kind of said, “We think Joe gives us the best chance to win,” pointing out what Miami does on defense and the challenges they do. Is that different now? Do you feel like Zach gives you the best chance to win this week? Or have you entered kind of a phase where, no, Zach has to play because you just kind of have to get him progressing?

It doesn’t change with regards to Zach. Zach is the future of this organization. He’s the number two pick, he’s extremely talented, he’s got a great head on his shoulders, he’s a phenomenal young man and these are the types of games he has to go through. He has to learn how to play football in the NFL, he has to get these reps. You know, there’s always different schools of thought with sitting and all that. If he was getting beat up and he was getting hit and he had zero chance, that’s one thing, but I think the reps he’s seeing, the defense he’s seeing, being able to see a Dennis Allen-type defense and all the different things they do, and then being able to see a (Brian) Flores defense and being able to go through all those things, he is only growing off of all of this because, like we all said, that Carolina game, that first game when he got hit a million times, if that was going to be his full season, I’d be a little nervous. But he’s making good decisions, he’s getting rid of the ball, the offensive line has gotten better around him, and obviously Mike (LaFleur) has gotten a lot more comfortable as a play caller. Obviously with Zach, this is going to be a great opportunity for him to take another step in the direction we need to get this organization going.

Brian Costello, New York Post: Robert, we just, we talked to a couple players a little while ago on zoom, and it looked like they were at home today. Did you guys change anything up with the illnesses you’re having or is that Covid related? What kind of are you doing there?

Yeah, with what happened, you know, it’s around the league right now, you saw what happened with the Detroit Lions, you saw it happen with us with Austin Walter having to check out right before the game, Ronny Blair had to check out before the game with bad illnesses. So, we decided to go virtual. So, all meetings are being done at home, but we’ll still have our lifts, we’ll still have our practices and walkthroughs in person and all that stuff, but as far as stuffing everybody into a meeting room where we could spread the virus, we’re just keeping them virtual for now.

Rich Cimini, ESPN: Is that for the rest of the week, or is that a day-to-day basis?

It’s going to be for the rest of the week. So, next time we’re all in one room together, we’ll be on an airplane to Miami.