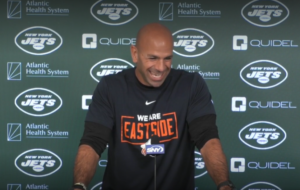 Injury wise, with the exception of Max (Mitchell) and Quincy (Williams), everyone else will be a full participant today.

Ethan Sears, New York Post: How did Duane (Brown) get through practice yesterday with pads?

Everything went good. He’s being evaluated today and tomorrow just to see how it works out. Obviously, the load today will be a little bit less than yesterday, but we’ll see how it goes for the next couple of days.

Antwan Staley, New York Daily News: Is that going to be a game time type of decision?

Antwan Staley, New York Daily News: Just talk about how big this game is. Obviously, the opportunity to go 3-2 and erase an 0-12 mark in the division.

I think every game is big in this League. To quote Bill Parcells again, ‘It’s euphoria and disaster every week,’ but at the same time, you’ve got to stay focused on the moment. It is a division game for reasons that make it a little more important. Every game is so big in this League, so if you get caught up trying to make one game way bigger than the other, you’re going to get yourself lost. We try to keep the main thing, the main thing. Miami is another opponent, they’re a really good opponent, and somebody that we’re looking forward to playing on Sunday.

Neil Best, Newsday: Not every team has a backup like (Teddy) Bridgewater. I assume you treat every backup seriously, but having a guy like him, I assume it makes it easier to get your players’ attention because they know what this guy has done.

Firsthand, he got after us last year when we went to Denver. Teddy is a very well-respected quarterback within the League circles. I don’t know about perception with media, but I know with regards to players and coaches who evaluate him and have played against him, have a tremendous regard for him not only as a person, but as a player. If anyone is capable of running that offense, it’s going to be him, and he’ll do it at a very high level.

Neil Best, Newsday: Players often talk about when they get to this level, adjusting to the speed of the game. You’ve been in the NFL a long time, but now 21 games into the head coaching role, do you feel things slowing down for you during games just because you’ve been doing it for a year and a half?

Maybe, a lot more aware of rules. You know the rules going in, but then you learn something new every day. When you’re watching the game, you’re looking at it in a different light, “Oh, look at that scenario and that scenario and that situation and, ‘Man, what could we have done there.’ A lot of discussions are made just by watching other teams. Since I’ve gotten the job, been working with a situational coordinator, just trying to put myself through as many situations as I can before we get to gameday, so when that happens, it is slow. There is still a lot of stuff I’m still learning and continue to learn. It slowed down, but those guys are still fast.

Dennis Waszak, Associated Press: You talked earlier about keeping the main thing the main thing, but you did make a point of emphasis to the guys about division games and that losing streak. How do you balance that now? Because those guys they know how important it is, and the fans, Jets-Dolphins it’s always a big game no matter what the records are, how do you say “Let’s lock in for this week”, the streak and all that and those factors?

So, what makes division games great, is that you play each of these guys twice a year. Even when we play other teams, you’re probably watching their tape because of all the crossover you get. They know us better than we think they know us, and we know them better than they think we know them, there’s so much familiarity because of the amount of times we play each other, and the amount of times we get to watch them through crossover. That’s what makes division games different, it’s also personal, because just like fighting your brother, you eventually are going to be hanging around your brother forever, you just get sick of each other. So, there’s some personal feelings that carry over from one game to the next and then lastly, I’ve obviously talked about it, the easiest way to get to the playoffs is to win your division. So, with all those, does it make it a little bit different? Yeah. Does it make it bigger? Not necessarily, you just want to make sure that you hold your own in the division if you truly want to look at yourself as a team that can take that next step, to be a consistent playoff contender or being part of that discussion for years to come.

Dennis Waszak, Associated Press: Does it make it a little more fun, from a coaching perspective, that you and Mike (McDaniel) go way back and that have that relationship, and you’re going up against each other?

I’ll be honest, I don’t like playing against my buddies. It’s just a hard deal, right? Because you’re going for blood, and you don’t want to do that with somebody you admire and care for. But at the same time, we get it, it’s part of the job, it’s part of our profession, and so when the game starts, it’s about the Jets and only the Jets.

It’s always important, you want to win your home games, you have to win your home games. Not just perform well in front of the crowd, but to win these games and being at home is a big deal. We want it to be something special, we want it to be loud, we want the advantage, we want people to worry about us when they walk into our stadium, and worry about our fans and the volume and how loud they get, and part of that is our responsibility, to give our fans something to yell about to make sure visiting teams aren’t overcrowding the stadium because people prefer to watch it at home, we want our fans to want to come to the stadium, and we’ll eventually earn that love. I think Deion Sanders has said it many times, “You got to earn my love”, and eventually we’re going to earn it, we’re going to earn it.

Antwan Staley, Daily News: What do you see from the Dolphins defense in particular?

Aggressive, opportunistic, fast, violent, they’re a really good defense. You can throw analytics or stats all you want about whether they’re not efficient, but they’re explosive and they don’t want you in the end zone and they do a lot of really good things to create problems, not only for the player caller, but for the quarterback and the offensive line protection systems. It’s going to be a tremendous challenge, again, something that we look forward to, but they do a really good job over there.

Neil Best, Newsday: Did you grow up a Tigers fan?

Detroit? I did, but I’m still rooting for the New York teams. It’s fun, my kids, they don’t know any better, my kids are glorified military, they don’t have a home, so right now New York is New York, shoot any longer, they’ll get the New York accent. No, we’re cheering on both of them and it would be awesome if we get a little subway series going for the world series.

Ethan Sears, New York Post: How important is it for you guys to build on the win from last week and put yourself in a position where you can start stacking wins?

That’s the whole thing. Every game is so independent of one another. You try to just focus on the game that you’re in, but confidence is everything in this League. You string together a couple of good games and you start flying high and you’re playing confident, you get faster, you heal faster, you feel better, just everything feels better when you gain confidence. So, it’s important, but at the same time we’ve got to focus on this one, last week will have nothing to do with what happens this week. Now as momentum builds, maybe, but this game will be independent.

Ethan Sears, New York Post: You guys being the team that’s primarily single high, what kind of challenges does that present to your safeties specifically against receivers like (Tyreek) Hill and (Jaylen) Waddle, when they’ll both be on the field at the same time?

It’s mainly the corners, when you’re placing the high as much as we do, you’re seeing a lot more, you’re putting a lot more stress on their corners, they’re on an island, but they put stress on everybody with the way their scheme is designed, they will attack backers, safeties, corners, it’s going to take all 11 to slow this team down. I said it earlier in the week, it’s a four by 100 relay team, running backs, tight ends, both receivers, they’re pretty fast, so it’s going to be a challenge.

Ethan Sears, New York Post: Can I ask about the shirt?

Yeah, so we’re recognizing James Magazine, Paterson Eastside High School, he’s our coach of the week. They won their third game of the year upsetting one of the top teams in the state last Friday. He played quarterback at his alma mater, back in 1995, and he’s been coaching at the school since 2012 and has been the head coach for four seasons, so best of luck to the team this weekend.