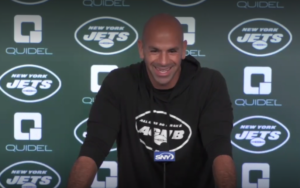 Brian Costello, New York Post: Robert, do you have an update on Max Mitchell?

Yeah, obviously he is dealing with that knee. I really don’t have a timetable, I know there’s a bunch of numbers floating around, but thankfully it’s not season ending and hopefully we do get him back soon. I just don’t have a specific timetable for anyone.

Brian Costello, New York Post: (Follow-up) Do you know what the injury is Robert?

I haven’t, I just got finished with all my team meetings stuff, so I haven’t really gotten that full update.

Zack Rosenblatt, The Athletic: So, Robert on that note, when you went back and watched how Alijah (Vera-Tucker) did at left tackle, what kind of stood out to you? And do you anticipate him staying at left tackle until the guys like Duane (Brown) or George (Fant) are able to come back?

Dennis Waszak, Associated Press: Robert, how did that conversation come about with him, moving to left tackle, was it like, “Hey, we want to do this” and he was like “Okay, we’ll do it” just how did that all come about?

To be honest with everyone, it’s kind of been in the making, it’s been a few weeks in advance, he’s been working on some left tackle sets and just kind of preparing himself for this moment and it just happened, but he was ready to go, he’s been preparing for it, and he hasn’t been taking practice reps, but on his own time after practice, he’s been putting in a little extra time to get himself prepared for this in the event that it did happen and it was one of those last case, worst case scenarios, got to happen, credit to him and his preparation and his mindset to go out there and not even flinch, and make the best of it and do a really good job with it also.

Dennis Waszak, Associated Press: (Follow up) Is that rare do you think, for a guy in his second year, who’s just, whatever it is, 20 games into his career, that he can play well at left tackle, left guard, right guard, at this level?

Yeah, it speaks volumes to him, one as an athlete, and two of his mindset. Like I said, he doesn’t flinch, can’t say enough about him, his selflessness to be able to go out and do that, lot of guys would be worried about how they would look on tape, but he’s just team-first, not even worried about what he will put on tape, because in his mind he is going to go dominate, and to his credit, he did it, and it’s just a pleasure because he stands for everything you believe in as a football coach and he embodies team, and because of it, he added to his value in terms of what he’s capable of.

Rich Cimini, ESPN.com: Robert, I just have a couple more offensive tackle questions. While you don’t have a timetable on (Max) Mitchell, is it fair to say that IR is a likely scenario? And then the other question is with Duane Brown, what are your plans for him for this week? Could he come off IR and practice, or even play?

Brian Costello, New York Post: Robert, if you guys determine he can practice Wednesday, is it possible he could play Sunday, or is that too quick, is he going to need more practice time than that?

We have to see where he’s at, it would be premature. I mean if he’s feeling great, ready to roll, we’ll see but I could not give you an answer one way or another.

Brian Costello, New York Post: (Follow up) Robert, at the end of last year right after that Buffalo game, I think your message to us was the same as your message to your team, about closing the gap in the division. This week is your first division game, why was that such a point of emphasis for you then, and where do you think you guys are in that process?

The quickest way to the playoffs is to win your division, right? And that’s the one thing you have control over, beating your division opponents and all that stuff, so you always have this thing that, it’s on our boards, “Own the East,” so if you are trying to become that playoff team, you’ve got to be great in the division, and this organization and this team hasn’t won in a while within the division, and like I said, if we want to take that next step as an organization, we’ve got to do better in our division. That’s basically what close the gap meant, and this is obviously our first opponent, first division opponent, and we’re in a heck of a division with New England, Miami, and Buffalo, three freaking really good football teams, and like I said, we’re looking forward for the opportunity to play Miami, they got weapons all over the place, they’ve got a hell of a head coach and it’s going to be a fun game.

Rich Cimini, ESPN.com: Robert just going right off that, with Tyreek Hill coming to town, I just want to go back several months, obviously you guys were very interested in trading for him. At the time, how disappointed were you, and now, what is the feeling several months later now that the dust has settled at that position?

Happy for the young man, Tyreek, he wanted an opportunity to go back home and play football in Miami, so you’re happy for the young man that he’s getting the opportunity to do that. Sure, we would’ve loved to have had him here, but I think things happen for a reason, but having him come in the building, he’s another opponent that we’ve got to get prepared for, he’s an explosive player, he’s got world class speed and his running mate, Jaylen Waddle, he’s pretty freaking good too, so they’ve got a heck of a one-two punch at receiver. Their tight ends really good, their backs are good, Raheem Mostert. I mean it’s like the four by 100 relay team, so we’re going to have our work cut out for us on defense and it’s a challenge we’re excited for.

There’s a lot of it with regards to the team. I said it in the press conference after the game, we started fast which was really good to see and we got that 10-point lead early. We didn’t finish the half the way we all would have liked. The momentum that they seized with regards to Kenny Picket coming in and the excitement and the juice that he brought took over the game, they played Renegade, which is usually kiss of death in that stadium and there was absolutely no flinch on either side of the ball and you look at those two drives and there were penalties that created first and long or first and 20 or second and long, and TFL’s, but they just kept getting back on schedule. The guys just kept plugging away and you go back to Zach specifically just hanging in the pocket, he was very poised, very calm, throwing the ball, throwing darts, throwing lasers exactly where they needed to go and guys were just grinding after catch, getting yards after catch and no flinch, fourth down conversions, third down conversions, the hurry up situation after the Corey (Davis) catch that probably could’ve went to review, that we were able to get a play off and still pick up five yards. The calm of allowing the clock to wind down to where we scored to only give them 16 seconds left. I mean it’s just so well executed from an offensive standpoint and just the calm and the resolve to overcome the second and third quarter and still come back and start strong, finish strong in a really adverse situation. I thought it was just a really, really great NFL game for those guys and something to build off of.

Brian Costello, New York Post: Robert, I think it was after one game, you talked about how you can kind of sense your defense is faster this year. Regardless of the results, when you look at the roster, when you look at what guys are doing, do you feel like, is that talent showing up, that you guys kind of went out and got this offseason through free agency and the draft?

I do, I said it last week that we’re much better than we were a year ago, I do believe that. I think it does show on the football field, are there things that we’ve got to clean up on defense? Absolutely. Do I think if you’re really a fan of football and watching play to play, can you see the improvement? Absolutely, you should be able to and our d-line is playing fast and they are disrupting, even though we hadn’t been able to finish, we did a great job finishing yesterday. The back end, our corners are doing a nice job on the outside and our safeties, it was great to show, those safeties showed up big yesterday, they took a lot of shots on our safeties yesterday, they came down, those two guys came down with three interceptions, four, if we don’t get that penalty at the end of the half, but just the overall resolve in them to keep everything in front and when they did try to take a shot we made them pay. Really pleased with the way the entire group played together, safeties, corners, and d-line getting after it and then the linebackers running, hitting the way they were, just a really good all-around game from the group.

Zack Rosenblatt, The Athletic: Robert, you guys played Bryce Huff for the first time this week, it seemed like he got some pressure in those pass rushing snaps he had. What’d he show you this week?

Same thing, Bryce (Huff), we all know he can rush the passer, he can affect the passer, and he did a lot of good things yesterday and hopefully, we get an opportunity to get him out there some more. He’s been working hard in practice, he’s been right there at the door step trying to get in and we felt like it was an opportunity to get him on the field and just change it up a little bit and he made it worthwhile, so kudos to him and hopefully we can get him out there again.

Brian Costello, New York Post: Have you ever had 10 d-linemen up before, Robert?

Just adds to the d-line rotation. No, I think in Jacksonville we ended up with it, but if we could put 12 up, we’ll put 12 up.

Rich Cimini, ESPN.com: Vinny Curry, he’s eligible too to come off IR, how far away is he from it? He didn’t do training camp, so he’s probably way behind in terms of conditioning I would think, what are your immediate plans for him?