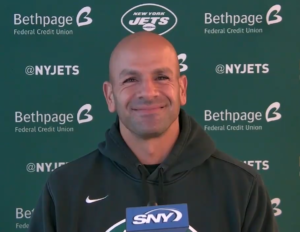 Brian Costello, New York Post: Robert, can you give us any update on the guy’s kind of dealing with injuries, Jarrad Davis and Marcus Maye specifically, if you think you’ll have them back this week?

They’re day-to-day. Hoping we can get them both back, but I’ll have a better idea for you come Wednesday. But it’s looking promising.

Mark Cannizzaro, New York Post: Robert, after the time off here, what are you looking for specifically out of Zach (Wilson) as you guys move forward? I’m sure you guys, obviously, watched probably every play over the Bye Week. What are you and Mike (LaFleur) and crew looking for from him as you move here specifically?

It’s going to sound elementary, but it really is, one, obviously, continue to get better, continue to grow from the things, not only that he’s done well, but the things that he did not do very well. Find a way as a group, offensively and as an individual, find a way to be comfortable in that first quarter so you’re not waiting until the second quarter to get rolling. Just continue to grow. Like I’ve said before, it’s not easy being a rookie quarterback, but at the same time, there’s steps that we can be taking every single week to get better so we can be there in the second half looking for a play or two to win a football game.

Connor Hughes, The Athletic: Is there a benefit, Robert, to stepping away and not necessarily playing for a week, getting a chance to watch as opposed to do?

Heck yeah. I think it is. I had a good talk with him, I believe it was Friday evening or Saturday morning, and he was talking about some things. I was like, ‘Hey dude, just make sure you go to sleep. Just relax, just lay off a little bit and just relax.’ He’s such a competitor, he’s just constantly thinking about it. But I do, I think coaches, players, the organization, even for you guys, to step away and watch somebody else for a minute. It’s a good refresher and a chance to come back and see if we can finish this thing strong.

Rich Cimini, ESPN: Before you left, I think maybe after the game or the day after, you said you’re mission on the Bye Week was to really study the offense, particularly the bad starts and come up with some solutions. Can you walk us through what that process was like last week and how confident are you that you came up solute, for some solutions to solve these bad starts?

I thought offensively Mike and his staff did a really good job digging in deep in terms of what the offense is having success at, what we’re not having success at, what the quarterback is having success at versus what he’s not having success at. The splits of first quarter versus second, third, fourth quarter just to see, what is it that he looks most comfortable doing. Having conversations with him to see if we can get into more of a rhythm in the first quarter. Then, obviously, on my end with regards to scheduling and just to see if we can change some things up that are subtle, but who knows. Feel really good about the soundness of the things that we’ll be doing over the course of the week. The one thing that I thought was very important was that we didn’t just make things up and do things just to do things. So, with regards to your answer, I’m going to keep a lot of it private, Rich, if that’s okay, but we feel good about the soundness of the decisions that we’re going to make moving forward. And it’s not just a grab bag to try to throw junk at the wall and hope that it sticks.

Brian Costello, New York Post: Will you be making changes though, Robert, to the practice schedule? Without getting into details, you kind of just hinted at that.

Yeah, it’s subtle. You guys won’t even notice it. It’s just subtle in terms of timing and all that stuff. Just trying to get the body clocks moving at an earlier time, as it pertains to the week.

There is balance. I’ll give you another quote, it was Cal Ripken, Jr., he said, “Practice doesn’t make perfect, perfect practice makes perfect.” So, you could be out there, I’ll give you the old golfer’s analogy, you go out to the driving range and you hit a ball and you hit three good ones and then you miss one and you’re like, ‘Let me try to change something.’ Then you change something and you hit another one, a couple of good ones, you miss some, ‘Ah, let me try to change it.’ Change it, change it, next thing you know you’re all over the place, when really all you needed to do was stick to the foundation that you built off of, make perfect swings and trust that. Yeah, once in a while it’s going to go haywire, but if you stay true, you’ll continue to improve. So, as it pertains to technique, fundamentals, all that stuff, I’m a stickler on that one. Those are your core foundations, those are your core principles that you just can’t let go of. You don’t want to tweak those. That’s what makes a player. Now, offensively, schematically, whether we put in a different runs or defensively, if we put in another coverage, whatever it might be, there’s always going to be room for that, but never at the expense of our fundamentals and our technique and asking guys to do stuff that they’re not comfortable doing because it can go the other way in a hurry, in terms of asking teams, asking a young man to do too much and now he’s all out of whack. If you guys just look around the league, teams that are struggling, what is the one thing they all want to? “Well, maybe we’ll scale back something and give our guys just a chance to go play?” and it’s like, well why didn’t you just do that from the beginning? But there’s balance because you got to do enough to make sure the opposing team is always off balance, but you always want to make sure that you’re players are in position to play as fast as possible.

Connor Hughes, The Athletic: Robert, one of the other guys injured, I know he’s not in contention to come back this week, but he probably should be within the next few, is Mekhi (Becton). Do you just have just an update on him and how is his process is going?

He’s doing a really good job. Obviously, he’s a few weeks away yet, but he’s been working hard. He’s in pretty good shape and I know he’s chomping at the big bit to get back. But as far as a concrete evaluation, I wouldn’t have one for you right now, Connor. It’s still the same.

Brian Costello, New York Post: Robert, where do you feel like you guys are at, in terms of establishing your identity on both sides of the ball?

Obviously, I think I stand in lock step, I think we all stand in lock step with Joe (Douglas), in terms of we’re going to be identified upfront. And if you look at our o-line has played very well here over the last few weeks, and we anticipate them to continue to play well. Our d-line has been extremely effective, very, very good playing with a lot of energy, a lot of just overpowering teams, overpowering their opponent. And at the same time, we saw it in London, got an offensive coordinator, completely change the way he calls a game, because of our d-line, to keep away from our d-line. So that’s where the chess match comes in our ability to change. I think it’s starting to get established. I know it’s hard to see right now, but I think in the trenches, I feel like we’ve been the better team, with the exception of those first couple of weeks, but it’s been coming along, and I think our guys are starting to understand where we’re going to make hay and where we’re going to win football games.

Rich Cimini, ESPN: You mention the improvement of the offensive line, I’m assuming you’re mostly referring to pass protection, because the run game, statistically anyway, has not been up to the league average. Am I misreading that, or do you see something there that the stats aren’t showing?

Brian Costello, New York Post: Robert, when you studied the first five games, Elijah Moore, we asked him about last week, but what did you see when you looked at it, and kind of looking at him, what can you do to get him going?

We’re going to get our best players on the field. Elijah obviously is one of them and he’s been affecting the game. Statistically, for example, in London it wasn’t in his favor, but he did draw that big 45-yard explosive or 40-yard explosive on a P.I. (pass interference). His speed is felt on the football field, obviously he missed a game, really game and a half if you consider what he missed in Denver, but he’s coming along. He’s going to continue to get opportunities, we just got to find creative ways to get him on the football field and get him in position to go make a play.