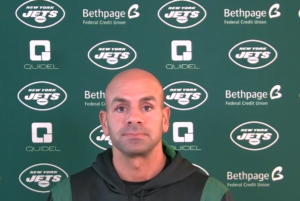 Connor Hughes, The Athletic: Do you have an update, Robert, on Elijah Moore?

Rich Cimini, ESPN: What does that mean for your receiver plans with Braxton, apparently not going?

The good news is (Jamison) Crowder’s looking good, he’ll be a full participant today. So, it’s Crowder for Berrios if that happens, basically.

Rich Cimini, ESPN: I just wanted to circle back on George Fant and Connor McGovern, if you’ve received any clarity on what their recovery time is.

(follow-up) So, are they having surgery, either one?

Brian Costello, New York Post: Robert, there was a point earlier in the season, midway through the season, you referenced Josh Allen in regards to Zach (Wilson) and his rookie year. How much do you guys look at what the Bills have done with Josh and sort of see that as maybe a guide of a way to develop a quarterback?

For sure. Credit to Buffalo, they kind of found his style. He kind of plays like Ben Roethlisberger, back in his younger days. It’s not exactly an on-schedule quarterback, but just a big, massive body that can hang in there, take shots, work off-schedule and all that stuff. They’ve really don’t a nice job kind of finding what he does very well and just letting him go do it. They’ve also surrounded him with some significant talent. With Zach, I really love what Mike (LaFleur) and his staff have been doing with Zach and just really making it about him and his pocket presence because at the end of the day, the best quarterbacks in the world, you look at Tom Brady and the Aaron Rodgers of the world. The one who win in 2:00 and third down, those critical downs, you got to be able to do it from the pocket. Then from the pocket, you got to be able to go off-schedule and that’s where Zach has made such a significant jump this year, as his pocket presence and his ability to throw from the pocket has improved dramatically. Really excited to see where he can take it because he’s getting rid of the ball faster, his feet are cleaner, his eyes are down the field, his accuracy has been really good, so he’s not even close to where he’s going to be, but I really like what Mike and his staff have been doing with regards to his development.

Mark Cannizzaro, New York Post: Robert, how would you, I mean we’re coming up on Week 17 for you, Game 17, how would you categorize this season for you personally and are there anything that presented themselves as more of a challenge that you might have expected going in as a head coach for the first time?

It’s about the same of what I’ve said to everybody. I was talking to my wife last night, I think I’ve lost about 25 pounds, so I got to get that back. But it’s been a rollercoaster that we were expecting. It is interesting, like I said. You don’t really know until you’re actually in it. Just when you talk to the people around, talk to you guys, talk to fans, the scars run pretty deep and you’re trying to absorb it all and you’re trying to understand it. But at the same time, there’s a lot of confidence in this building and the direction we’re going in. It’s not to say that there were bad people in place before, I think you hire the people you hire and you do the best you can and whatever happens, happens. Speaking for Joe (Douglas) and myself, just really excited about the foundation that we’ve been able to lay down here, the players that have been working relentlessly, the guys who have gotten opportunities, it has not been smooth by any sense of the imagination, which I think we can all agree on, but I think there’s been tremendous steps with regards to learning, understand each other, understanding the fan base, understanding this organization, you guys, and really trying to build something that’s going to have longevity. That’s why this game, along with the offseason, is really, really exciting and it’s going to be a fun next few months.

(follow-up) Just as a follow-up to that, when you were observing Kyle (Shanahan) in San Francisco, even though you’re close to him and you’re dealing with your own unit, were there any things that you saw that he was going through that kind of A. prepared you for being a head coach or B. things you just had no idea, didn’t realize you would have to deal with once you took over this spot, this position?

I’ve been very fortunate, like I said, this is the fifth one I’ve been a part of. Houston was the start of a rebuild, Seattle with Pete Carroll, Jacksonville with Gus (Bradley), Kyle (Shanahan) and John (Lynch) in San Francisco, and then here. I think there’s a little bit to take from all of them. Kyle has, he’s got his full 53-man roster, all of it, but the way him and John worked together are in lockstep. They are as harmonious, I don’t know if that’s a word, as you can imagine with the general manager and a head coach. Same thing with Pete and John Schneider. It was so important for me, from my perspective, just to build that relationship with Joe (Douglas) and lock arms and do this thing together, from philosophy, to messaging, to all of it. I think the one thing that you could take from teams all over the league who have success is when the front office and the coaching staff communicate to the level we do and see things exactly the same. I think you’re more likely to have success in this league where when there’s friction between the two, if you guys are following.

Neil Best, Newsday: Last year, the guys who were first year coaches obviously were dealing with the height of COVID and that was a huge challenge. This year has been more of a mixed bag, you’ve had to deal with it but not quite like last year. How has the COVID challenges affected your transition to this job?

I think 2020 kind of really made everybody immune to it. The adjustment this season going virtual was seamless and I think it’s because of the experience that we were able to get from 2020. Thankfully, we were able to go through OTAs and training camp where we were able to have in person meetings, so we were able to establish a relationship with the players. So, it’s been an unfortunate annoyance, whatever you want to call it, but at the same time, it’s for the health of our players and the coaches and everybody around us. I feel like we’ve been able to adjust pretty well.

Neil Best, Newsday: To what do you attribute losing 25 pounds? Is it stress, not having time to eat, what is it?

I haven’t been able to get into the weight room as much as I want to, I don’t eat as much as I normally would. It’s a little bit of everything.

Brian Costello, New York Post: Robert, the Bills linebackers, (Tremaine) Edmonds and (Matt) Milano, they don’t seem to get as much attention maybe as some other guys, but I feel like every time the Jets play the Bills those two guys jump out. Just what are your impressions of them, studying them?

It’s interesting, Avatar, that’s Tremaine, he’s like a unicorn in the linebacker world. I mean the guy is six-foot five, he’s got ridiculous length, speed, range, knockback, he’s got all of it. There isn’t anything he doesn’t have. So, he is special in every sense of the imagination. The amount of space he takes away just by his mere presence in the middle of the field is unlike anything that’s been seen in a very long time. I think (Brian) Urlacher would probably be one of those guys. Then as far as Milano goes, so that was an easy evaluation, Milano was different. You had a mixed bag on what people thought of him, but he’s really proven to be a heck of a football player. He’s smart, he’s instinctive, he’s actually a lot tougher than people gave him credit for coming out of college. He is exactly what you’d want out of a linebacker in terms of instincts, speed, feel, doesn’t miss many tackles, if any at all and he’s always where he’s supposed to be. He’s a playmaker, so the combination of the two and their ability to communicate with one another and then I’m also going to throw one to Bob Babich, their linebackers coach. He was our coordinator in Jacksonville, he coached Urlacher and (Lance) Briggs, like he’s one of the best in the world at coaching linebackers and he’s got a heck of a group.

Mark Cannizzaro, New York Post: A little off the beaten path, Robert, in terms of his game, but Mike White was a bit of a shooting star for you this year and I’m kind of curious how you would characterize his run with you and what you see his future as with you?

Mike White, love him, love his presence, love the way he in meetings, the way he is around the building, the way he communicates with his teammates. We all have confidence in him being able to play this game, obviously played at a high-level against Cincinnati, was about to go off against Indianapolis, really excited to get him back here next year.

DJ Bien-Aime, New York Daily News: Robert, with the receiving core continuing to be decimated, I mean you get Crowder back, how important would a run game be this weekend, especially going against a pass defense as strong as the Buffalo Bills?

I think, DJ, the run game, it’s always going to be important. It’s one thing that we’ve been trying to establish, I think our o-line, JB (John Benton), Mike (LaFleur), they’ve done an unbelievable job getting it up to speed, but especially this time of the year, it’s cold, it’s going to be slippery, it’s going to be a little wet. You’re in December, being able to run the football is everything, so obviously anytime it’s always going to be important. There’s something about the run game that just wears on people and when you can do it, it just makes it easier to play the game of football and it opens up everything else. It is very important.