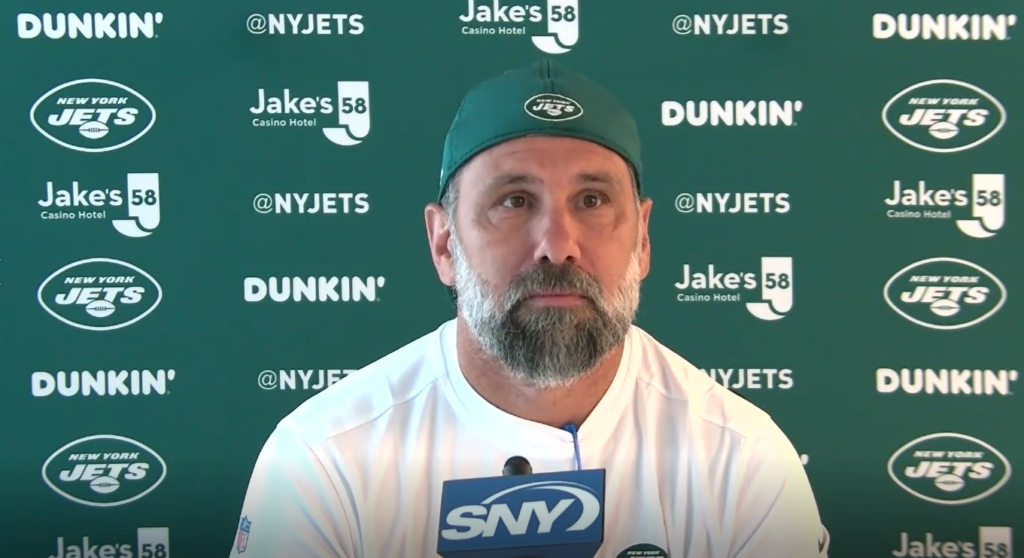 DJ Bien-Aime II, New York Daily News: Isaiah Dunn has been making some plays out there, what are some things that you’ve seen from him that has allowed him to continue to flash?

He’s a guy that has grown every day. It’s one of those guys that we thought would get drafted. We definitely contemplated drafting him towards the end and were very surprised when he wasn’t. So, we were ecstatic to get him here, especially as a UdFA. That’s a guy that makes strides every day and he’s making a push to not just make this team but potentially play and contribute.

Rich Cimini, ESPN: Jeff, now that the Mini Camp has wrapped up and the off-seasons pretty much wrapped up, can you just outline some of the biggest bullet points from your perspective of some of the guys who have made the biggest strides on defense?

Shoot, it was across the board, the strides were. Just a ton of growth as far as we started with culture and then we laid the foundation of the scheme and I would be hard pressed to acknowledge one guy or another. It was a collective thing, I thought the group was just extraordinarily hungry for learning and growth in every way. Technique, scheme, knowledge of the game, but from a group standpoint there was a lot of growth. I can’t necessarily point out one guy.

Connor Hughes, The Athletic: You guys have rotated a lot of cornerbacks throughout OTAs and minicamp as well, but the one staple that has been out there, probably because he’s one of the guys that has been healthy every day is Bryce Hall. I was wondering if you could just assess his play to this point and what you’ve seen from him and what your expectations are for him this year?

He’s a guy that has length, he’s got a great brain and he’s got a thirst for the knowledge of the game. That’s where he’s going to eventually set himself apart, I think, because he’s so detailed. He’s a guy that has the callus on his finger from taking notes and games or in practice. That entire room, they’re competing. We’re going to try to fine-tune that group that we go out there and win with and play good defense with. Bryce will definitely be in that mix. I don’t think necessarily anybody has set themselves apart from the next. He’s got the most experience of the group. He’s played the most football of the group but that doesn’t necessarily mean that it’s his spot so it’s going to be a great competition for the corner spot and you’re going to get the best version of whoever ends up being the starter. Could Bryce be the starter? Absolutely he could, but we’re far from that.

Rich Cimini, ESPN: How much did it impact the defense not having Marcus (Maye) at all this spring practicing?

I didn’t know Marcus until two, three days ago until he showed up, and to be around him and feel his presence and start to get an understanding of what he brings because we all know what the football player is, we watched the tape. I didn’t realize, other than what people had said as far as the culture is concerned, the voice and the command that he has. We did miss him, to be completely honest, we missed him. But he’s a guy that, in my short time getting to know him here, is super eager to get caught up and to get up to speed with what we’re doing and I’m excited about moving forward in training camp with him because he definitely will elevate this group in every way.

Brian Costello, New York Post: Jeff, just following up on that. With (Lamarcus) Joyner and Maye, they both have done a lot of different things in their career. How do you see those two on the field together, is one guy who you picture being more in the box, one guy you picture being a deep safety? How do you see them together when you do have them on the field together?

I think Ashtyn (Davis) is in that conversation as well. I think the three of them, it’ll be a good group. We got some other guys too that are contributing. I think that Lamarcus is unique, the fact that he can go down and he can play on receivers in a man-to-man capacity, that’s hard to do for a safety body. I think the experience of playing nickel in Vegas with the Raiders, that’s going to be huge for us. If you go back and you watch the San Francisco 49ers defenses, what really unlocked that defense was their ability to cover receivers with Jimmie Ward. I would definitely see Lamarcus more in that capacity, I know it’s the Lamarcus and Marcus show but, I would see Marcus more in the versatility mode. He can play it all, he’s got the body, the size, he’s got the physicality to be a box player for us, for sure. He’s also got the speed and range to play in the back end, and play the half-field, play the middle-third, do all those things. It’ll be really exciting to be able to utilize both guys skillset.

Al Iannazzone, Newsday: Jeff, you said two weeks ago you’re excited to get Carl (Lawson) in the building. You got him in here, what kind of impact, what did you see from him? Especially this week when he took part?

He looks great. Definitely a guy that’s not been just sitting around the couch. Fit, strong, explosive, you can tell he’s working his craft, you can tell he’s taking all his pointers. Our front is unique and it’s a little different in the way we attack, and the stances, the whole thing. You can see that this is not the first time he’s done it. He’s been out in the backyard refining his stance and getting acclimated to this front even though he wasn’t here. We had the acclimation period when they first show up to us, he wasn’t allowed to practice with us. He was able to get out there today with us and the offense was having a hard time blocking him. He’s going to be a huge addition for us.

Brian Costello, New York Post: Jeff, at linebacker I think C.J. (Mosley) is obviously well established and Jarrad (Davis) has been in the league for a while. Beyond those two guys, what do you feel like you have at linebacker right now and what’d you see from that group in the spring?

I’m extremely excited about that group. You got two very established guys in C.J. and Jarrad, like you said. Beyond them, these young cats, they’re exciting. They’re long, they’re fast, they’re instinctual. Jamien Sherwood, I’ve been around a lot of rookies as a player and coach, he’s unique in the way that he has absolutely picked up the finite details of this defense already. His ability to command the defense, run the huddle, make the adjustments, make the checks, the calls, the whole thing, very exciting. And then, Hamsah (Nasirildeen) has a different level of anticipation and instinct that rookies don’t normally have, to go along with both guys being long and athletic. It’s an exciting group, it’ll be fun to watch those young guys grow and try to find spaces for them to play this season and contribute.