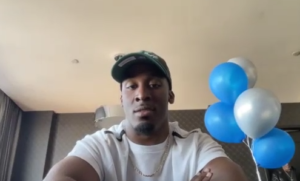 DJ Bien-Aime, New York Daily News: How does it feel to be drafted by the Jets?

Man, it felt like it took forever but now that it happened, I’m so happy. I’m blessed to be a Jet. I’m happy for the opportunity to be a part of this organization and help build up this organization.

Brian Costello, New York Post: Breece, what was your interaction like with the Jets during the pre-draft process, and did you get any kind of feeling from them during that process?

Yeah, just getting into formal meetings at the Combine and then informal Zoom meetings, just doing different things like that, and kind of just building that relationship. And then just having the coaches getting to know me, just getting those interactions in.

Brian Costello, New York Post: Did you get a feeling that they liked you, that this might be where you ended up?

Yeah, for sure. Just from the vibe I got from them at the Combine, I felt like they were different from a lot of coaches in some of the meetings. It was real good to get in there and get to know all the coaches and talk to them about my game and what they thought I could get better at and that kind of stuff.

Brian Costello, New York Post: Breece, for Jets fans who may not have seen a lot of Iowa State games the last couple years, can you tell them what they’re getting in Breece Hall?

A three-down back, a guy who can catch the ball, make people miss, run you over, and somebody that plays hard and a person who’s just as good off the field as he is on the field, so a guy who’s going to impact the community and just be more than a football player.

Rich Cimini, ESPN: What were your expectations going into the Draft in terms of where you might get picked?

Brian Costello, New York Post: Do you know much about the Jets offensive system? It’s a popular one run by a lot of teams in the NFL. How do you think you fit into it?

I know that it’s really running back friendly, so just being able to touch the ball a lot and have a lot of opportunities, that’s all I need.

Andy Vasquez, NorthJersey.com: Do you know anything about Michael Carter? I’m sure you got to see some of what he did last year if you did. Just what do you think he brings to the table and what do you think about the opportunity for what you guys can do as kind of a tandem for this offense?

Yeah, just seeing what he did last year and seeing what he did at North Carolina, I got to watch his game a lot, just watch how he’s a bruiser but he can also make you miss. I think I can come in and compliment him really well. I can’t wait to get in there and learn from him. Just for me to ask him questions whenever I need to, just for him to teach me the ins and outs of being a running back for the Jets.

Rich Cimini, ESPN: We see the balloons. Big draft day party for you, Breece, at the house?

Yeah, having some family around, some friends, so it was a good time.

Connor Hughes, The Athletic: Breece, there was a report that the Jets actually were thinking about trying to trade back into the first round to get you last night. Did they talk to you about that at all when they called you this time, or did you know that that was possible?