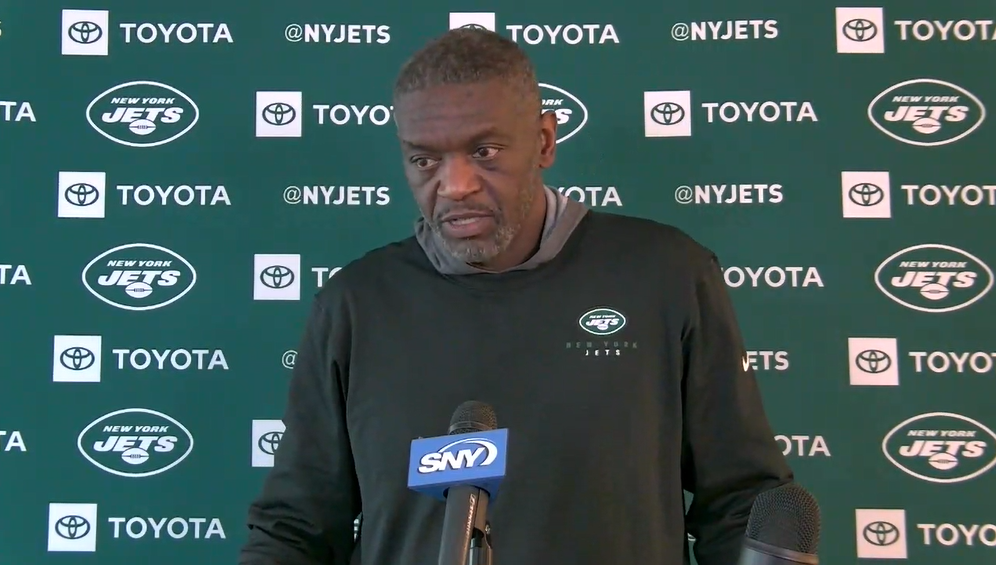 Brian Costello, New York Post: What do you think the key was for you guys Sunday in stopping the Brown’s run game?
Well, it’s a combination of things. Again, just having the guys up front play aggressive, loading up the box, putting the safeties is down in the box, things like that and giving them a couple of change-up up looks, that I won’t say we haven’t done them before, we just don’t do them quite as often. So just kind of keeping them off base a little bit and doing some things up front that they haven’t seen early in the game. I think it kind of discouraged them a little bit.

Rich Cimini, ESPN: Frank, with regard to the Patriots, I mean, do you prepare for both quarterbacks or how do you approach, I guess (Bill) Belichick’s not going to say, but how do you approach that?
We have our last game to go back to, and quite frankly they did a good job of running the ball, so either one of their quarterbacks can turn around and hand the ball off. They have two good running backs and their run game has really, really been good this year. So, we’ve prepared really to handle the run game stuff and we’ll deal with the quarterback situation as it comes. Right now, we think Cam (Newton) is the guy that’s giving them a chance to win, so we got to prepare that way. He brings a unique thing to the table and then we’ve seen the other kid, he’s done some good stuff. We prepare for them both, but our focus has been really on stopping what they do best and that’s the run game.

Mark Cannizzaro, New York Post: Frank, what have you seen in Cam (Newton) this year?
Well, you see a guy, he’s still big, he’s still mobile, he can do some things. Honestly, as you watch him throw the ball, he probably doesn’t throw it as clean as he used to, but every now and then you see him do some things with his arm talent that, it looks like the old Cam, so you got to be wary of it, you got to be alert for it. And quite frankly, he still can make throws. Obviously, the numbers don’t bear that out, but as a coach and if you’ve been around and you’ve seen him play, you still worry about him beating you with his arm.

Connor Hughes, The Athletic: Frank, did you change anything in the way that you call a game or the way that you prepare for a game after that Seattle week because it seems like your defense the last two weeks, it’s been night and day?
Yeah, obviously, it’s kind of the first time getting back on the horse the last time and you come back in it, a little bit of apprehension and some grandiose ideas about, ‘When I get my turn, this is what’s going to happen,’ and here’s your turn and it does not happen. So yeah, we changed a couple of things. Obviously, the guys have bought into what we’re selling right now. We’ve done some things, kind of paired things down, and gave them a chance to play a little bit smarter and a little bit faster. And again, they bought into it and so we really try to focus on the kids and what they do and do best. And obviously, you got kids doing what they do best, they’ll do it a little bit faster and more aggressively. So that’s what we’ve done and quite frankly, it’s not just been me, it’s been every coach on the staff: Dennard (Wilson), Joe Vitt, Andre Carter, all those guys have been really good at kind of identifying what their kids can do and do well and we paired down the other stuff and we go forward.

Brian Costello, New York Post: Frank, what’s (Tarell) Basham showing you in these last two weeks?
Well, more than anything, what Tarell has shown is his pass rush ability, his ability to play fast. He’s an extremely smart kid and more than anything else, I think what he’s done is he’s disciplined himself to play within the framework and the plays are starting to happen for him. He was always the guy that kind of chased plays and he’s not doing that right now, just kind of doing his job and his assignment and playing fast and the plays are showing up and nothing spoke louder than last week, the way he finished that game for us.

Rich Cimini, ESPN: Frank, we’ve been asking Adam (Gase) for weeks about all the speculation swirling about his job and so forth, but a lot of times fans don’t understand that it’s not just the Head Coach, it’s the entire coaching staff that has to live with whatever uncertainty and so forth and I’m wondering how you cope with that sort of thing?
Well, when you think about the New England Patriots, you don’t have a whole lot of time to worry about other things. Obviously, the situation here is not the way we planned it going forward in the season, but at the end of the day, we get an opportunity to go play the Patriots and kind of put ourselves out there one more time to see if what we’re selling, the players are going to buy, and then, the chips fall where they may. It’s a tough business, it’s about results. When the results don’t come out right, sometimes there’s speculation and there’s going to be some consequences. How will all those things work out? That’s yet to be seen. I just want our kids to go out and finish the season the right way. They’ve done a good job over the last two weeks and I think if we can end this thing the right way, I think that works well for everybody.