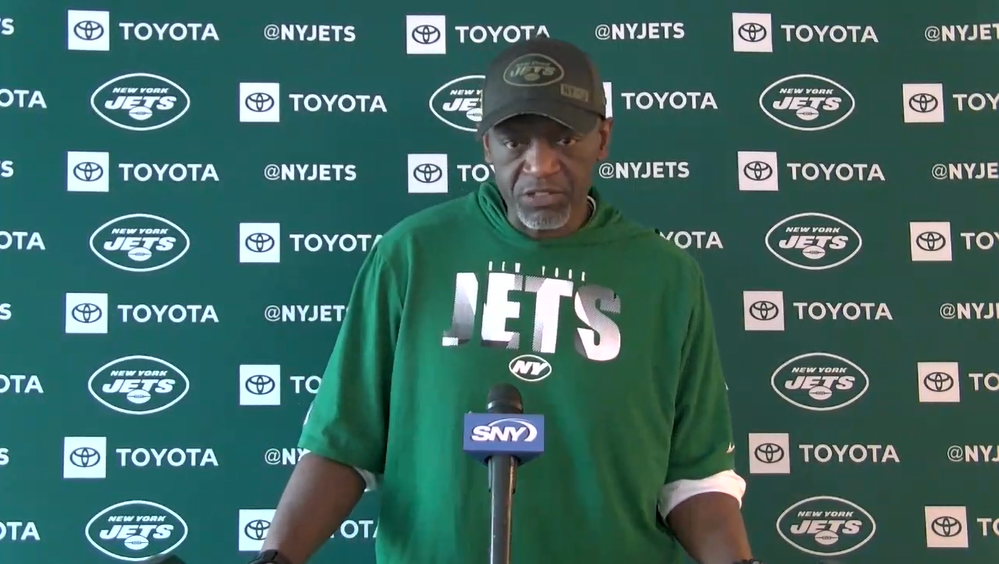 Brian Costello, New York Post: Could you just describe what this week has been like for you, these last four days?
Well, it’s been kind of a whirlwind. Initially, obviously, with the situation that happened this week, been kind of a whirlwind. But at the same time, it’s been exciting. Kind of excited to have an opportunity to do what I’m going to do for this particular game. So, that part of it’s been good, but it’s been a whirlwind. It’s been a lot of different parts moving, trying to massage players and coaches and get things kind of moving in the same direction. And that part of it’s been a challenge, but it has been exciting and fun at the same time.

Brian Costello, New York Post: How much can you change the defense, Frank, at this point of the season?
Well, it’s really not about a lot of change. Obviously, like you said, at this point in the season, were 12 games in, and these kids have a pretty good grasp of the things we were doing. I guess my role is to make sure that we take advantage of what these kids are trying to provide. They’re busting their tails every day. They come to work every day. They play their butts off, they play hard. They kind of limit mistakes and whatnot. And we’re trying to put them in position to win. So, all the things have been set up to try to put these kids in position, to be confident, going on the road into a tough environment and confident to know that they have a chance to come out of this thing with a win.

Brian Costello, New York Post: You get to start off nice and easy with Russell Wilson and the Seahawks, Frank. What kind of challenge does he present for you guys?
Well obviously, the kid (Wilson) is having a MVP season so, he presents a challenge, not just for me, but for anybody that plays him, but, he can do it all. He’s extremely smart. He’s agile. He throws the ball well. He has a command of everything that’s going on with that offense. He’s confident. He’s a highly, highly competitive kid, and he never says no. So, all those things bode well for the Seahawks, and that’s why they find ways to win games. They’ve won ever since he stepped to the helm there. And it’s a challenge, of course. It’s a challenge for anybody. It’s a challenge for us. And yeah, it’s going to be a tough day up there. But, at the end of the day, if we go up there and play hard and do the things we were supposed to do, hey, I like the idea of us being able to compete with them.

Al Iannazzone, Newsday: Frank, along those lines, too, DK Metcalf, how tough is it to defend him?
He’s a big, physical, talented, young receiver. And obviously, it’s going to be, defend him by committee. There are so many things that he’s capable of doing, so many big plays he’s made. And he and Russell have a connection that’s kind of uncanny right now. So, it’s got to be by committee. We got to figure out ways to do things to kind of limit some of the things that he can do. And hopefully, things work out for us. But, it’s a challenge, because he is such a talented young man.

Connor Hughes, The Athletic: Frank, how would you say things have changed for you from the last time you were a defensive coordinator? How have you evolved as a coach and how will things be different from your play calling?
Well, obviously, my first time out, there was some apprehension and whatnot. It took some time on task and doing the job and whatnot. And so, this time the apprehension’s not there. I’ve done it before. I’ve gone through the butterfly stages of, calling an early initial game. And really owning each call and just going on, whether you make a mistake, or not just owning that call and moving on. And so, that part of it will be different. I’ve learned a lot of football over that time. I’ve learned some of the things I thought I knew, I didn’t know at all. And now going back into it, I can better make decisions or help guys, put guys in position to do things better than I did before.

Andy Vasquez, The Record: Like you mentioned, it’s been a crazy week and with the upheaval, and obviously, it was tough to lose that game that way. How do you think the players have responded and what have you seen from them in these first couple of practices?
Well, that’s the unique thing about this group of kids that we deal with. These players have always been resilient. Through all our struggles this year, even last year, when we were going early in the season, and it was a struggle for us. These kids have always been resilient. One of the most unique things about our players is that, when they hit the field, they hit the field running. They come out with the right intent. The attitudes have always been good. I’m yet to see one day when they come out with a bad attitude and we have to push them to go. We just have to make sure they’re going in the right direction. We’re very, very fortunate to here, with the young men that we deal with because they do a good job of preparing themselves every week. Now obviously, things don’t turn out as well. And so, that’s kind of the goal and that’s the mindset. Then let these kids reap some of the benefits of some of the things that they’ve done in the past. And some of the things they’re doing right now to try to go get a win.

Eric Allen, NewYorkJets.com: Frank, I’m sorry, my video is not working right now, but I wanted to ask you, what was it like for you back at N.C. State to play for Pete Carroll and how special is it for you, even on a daylight Sunday, when you look across the sideline and see him?
Yeah. Pete has a lasting effect on you because he’s such an upbeat, positive guy. I was very, very fortunate to have Pete in my life early as a freshman and sophomore. And he taught me, if not anything else, he taught me about how your attitude is going to dictate a lot of things for you. And if you just have a proper attitude and be positive about things, things kind of have a way of working out. I’ve kept those lessons with me. And then I watch how he operates now. I know what he’s he brings to his team and whatnot. And so that’s exciting. And at the same time, it’s a challenge because, throughout my career, I’ve always looked at Pete and the things he’d do and try to emulate some of those things. So, now here I am having to go against the guy that really I kind of model some of my things after. And it’s exciting, and at the same time, it’s a challenge. I’d love to go up there and talk to him and see what happens in pregame. Obviously, with COVID we can’t do that kind of stuff. But it’ll be fun. It’ll be fun to get back and see him and talk to him and then compete against him.

Dennis Waszak, Jr., Associated Press: Frank, when did you find out that team was moving on from Gregg (Williams)? And at what point did you know that you were taking over, in his place?
I won’t call it a shock, obviously, once they make the decision, the decision is made. But it was all within a day’s timeframe. Obviously, Coach (Adam Gase) wasn’t satisfied with the way some things kind of happened. He made his decision and, unbeknownst to me, he chose me for the job, in the sense of, he made his decision before he ever talked to me about the position itself. So, this thing could have gone a couple of different ways. I’m fortunate that it came my way. I’m excited about the opportunity. But he did what he had to do, and he thought was necessary. And now, hopefully, I can stand up and deliver some of the things he wants delivered.

Rich Cimini, ESPN: Frank, I’m wondering, on Sunday, could you just describe, so you were on the sideline, you got your headset on, and you’re hearing that call. And I’m just wondering if you could explain your role in it, and like what you were thinking and then what you were seeing as the play unfolded?
Oh, that would be really, really kind of unfair to go back and play Monday morning quarterback. It kind of is what it is. We were all in at beginning, we’ll be all in at the end and things happen the way they happen. It’d be unfortunate to go back and second guess anything. It happened. It’s part of what happened to us and obviously, we got to move on. We got move on from that. We’re already after practice on Thursday. So, we got to move on. The situation, it happened. We wish things were different and they’re not. So, I don’t think it’d be fair to the kids or to Gregg or anybody else for me to go back and second guess, or play Monday morning quarterback on that thing.

Brian Costello, New York Post: Frank, I’m just curious, that’s a tough situation for Lamar (Jackson) early in his career. Did you say anything to him this week to kind of pick him up?
Yeah. Obviously, were going to depend on that kid. Obviously, we see a bright future for that kid. We think there’s some talent there. We think the young man is budding right there. And we think this experience is going to be great for him. I mean, obviously, things didn’t work out for him the way we expect it to work out. But, to his credit, he’s been a standup guy about the situation. He’s come back and he’s gone to work. He’s put his head down. Lesson learned and let’s move on. And coach Wilson and the other guys have done a great job of keeping his morale good and having him go out and practice. And he’s done a good job for us. His attitude’s been outstanding.

Brian Costello, New York Post: Frank, for those of us who’ve never called plays in a game, is it something you never lose the feel for, or is it something you kind of got to get back into a rhythm of doing?
It’s something you got to get a feel for it again. I mean, obviously, the responsibility lies in your hands. You make the call, once it comes out of your mouth, all 11 kids are trying to do what you ask them to do. Everybody’s dependent on you to make the correct call. And even though sometimes we may collaborate on the call, at the end of the day, the responsibility is yours itself. Yeah, it’s a challenge. It’s scary sometimes, in certain situations, but at the same time, it’s why we practice, that’s why you go through all these things in the league. You have your experience and you depend on your coaching staff, you depend on your players and you make the call and hopefully you make it with confidence and things work out, or they don’t. You move on from it. You learn and you move on.