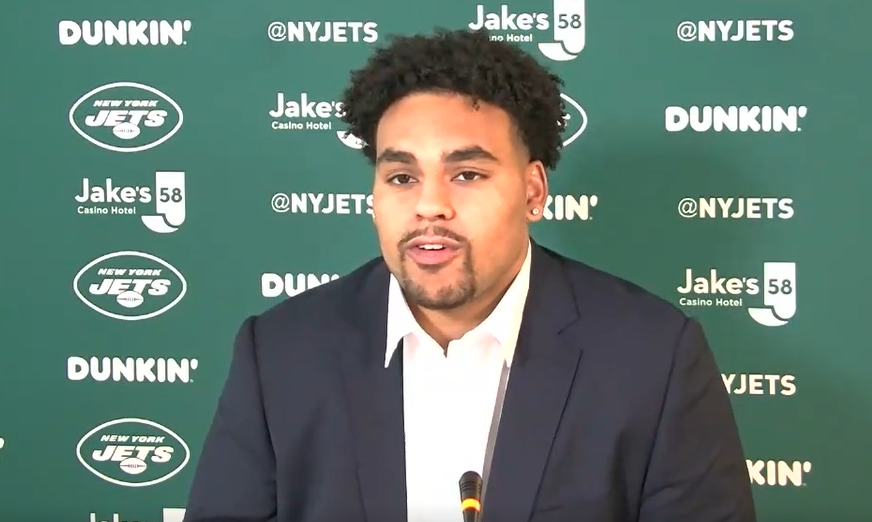 Brian Costello, New York Post: Hey, Alijah. What’s the last day been like going back to Thursday night when you got drafted?

Yeah, I mean, it’s been a crazy experience, I got the phone call and then they tell me they want to fly me out the next day. Hopped on a plane over here to New Jersey and so far has been great. I’ve seen the city a little bit, just flying in, and I got to meet the staff and the coaches, and it’s just been crazy and exciting.

Brian Costello, New York Post: Obviously getting drafted in and of itself is awesome, wherever you get drafted, but did it mean a little something extra special to you that they traded up to get you? You know you’re the guy they wanted. They basically use three picks on you. What does that mean to you?

Yeah, definitely, and I kind of figured it out when I got the call, then they told me they traded up for me. I was excited and I was blessed, for a team to put that much faith in me it was really an amazing experience, but at the same time, I know I’ve got to come in, prove them all right. That’s going to be an easy thing to do, just because I’ve been doing all my life, I just compete every day. So, it’s a great feeling, just blessed.

So, obviously you guys know that Pac-12 opted out of the season and then I opted out because I felt like I was ready physically and mentally for the league, then they obviously brought it back. And then at that point, it was just a decision with myself whether or not I want to come back and compete with my teammates, my brothers and that was an easy decision. I just wanted to play football and that’s pretty much all it was. I just tried to get to that Pac-12 championship and then that was pretty much an easy decision in itself.

DJ Bien-Aime, New York Daily News: Alijah, has it sunk in yet that you might be a New York Jet, that you are a top 15 pick? Has that sunk in for you yet?

Yeah, it sunk in for me about like 24 hours after. I was just spending time with my family after celebrating and then once I hopped on the plane I was like, I’m really a New York Jet. It was a great feeling, just on the plane, thinking about that on my way over here, then just seeing the facility and the area around it, it’s been great so far.

Al Iannazzone, Newsday: Alijah, have you had a chance to speak to Zach Wilson. What do you think about playing with him and now Elijah Moore, who they took yesterday?

Well, I spoke on it a little bit before, Zach Wilson is a competitor, which I like, just because I am as well. So, I have spoken to him a little bit, seems like a great dude, just also watching the interviews and then, Elijah Moore, he worked out at Exos where I did training for the combine and pro day. So, just looking at him, I know his work ethic, I know he’s all gas, no brakes and that’s pretty much just the guys that are established, trying to bring into this building.

Brian Costello, New York Post: Alijah, do you have any memories of Zach from when you guys played a couple of years ago? I know you weren’t focused on the offense, BYU’s offense, but do you remember anything about him from that game?

Like you said, I wasn’t really too much focused on their offense, but obviously, when we’re sitting down on the sideline I see he made a couple of good throws. So, just kind of thinking back on that, it was kind of crazy I was able to experience that before, obviously being his teammate.

DJ Bien-Aime, New York Daily News: Alijah, you’re from SoCal, Oakland, now you’re up in New York. How much of the difference weather-wise are you ready to adapt to?

Well, I mean, just obviously playing, going to playing cold places like Utah, Colorado, I’ve been used to that playing wise. I’ve also been out here, been in New York a couple of times when I was younger, have some family in Massachusetts. So, I know what it’s like, it’s not too much of a crazy experience to me just because I’ve already kind of experienced it in a way. I feel like I’m going to adjust pretty easily.

Brian Costello, New York Post: Alijah, I know nothing’s set yet, position-wise you’ve only been here a day. But is there a chance that you could be left guard and Mekhi Becton could be left tackle, back to back first round picks and you guys could be together for a lot of years. Does that idea excite you, kind of forming a solid offensive line?

Yeah, being able to play alongside with the Mekhi, that’s just two physical players on that left side, so yeah, that’d be great. But at the same time, it’s whoever the team needs me to be, left guard, right guard, right tackle or wherever, I’m going to just come in and play. So, definitely been thinking about that, but at the same time, it really doesn’t matter to me.