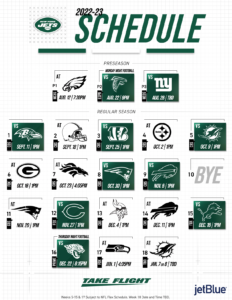 May 12, 2022 – The National Football League announces the 2022 schedule for the New York Jets. The schedule includes the club’s second Kickoff Weekend home game in six seasons, an all-AFC North open – facing all four teams in Weeks One through Four, only the fifth home Thursday Night game since 2008, and back-to-back road trips to close the regular season.

Immediately following the release of the full 2022-23 Jets Schedule on NFL Network at 8:00 p.m., Visa cardholders can purchase single home game tickets at nyjets.com/tickets before they go on sale to the general public.

Season Ticket Holders will also receive early access at the same time, with Club & PSL Holders saving up to 25% off variable face value of select tickets for select games. Tickets will go on sale to the general public Monday, May 16 at 10:00 a.m. Terms apply. More information, visit newyorkjets.com.

In addition to their Kickoff Weekend game vs. BLT (9/11), the Jets play AFC North teams in each of the first four weeks: vs. BLT (Week One), at CLV (Week Two), vs. CIN (Week Three), and at PIT (Week Four) • This marks the first time since 2002 when the divisions re-aligned that the Jets faced every team in a division in consecutive weeks.

This season, the Jets potentially face four of the top five highest ranked quarterbacks in 2021 passer rating, including three on the road, as they face: Joe Burrow (Week Three vs. CIN), Aaron Rodgers (Week Six at GB), Russell Wilson (Week Seven at DEN), and Kirk Cousins (Week 13 at MIN).

Hosting the Jacksonville Jaguars in Week 16 (12/22), the Jets will play just their fifth Thursday Night home game since 2008 • Additionally, Week 16 is the latest the Jets have played on Thursday Night in franchise history.

2022 marks the sixth-consecutive season – and 11th time in 12 years – that the Jets will close on the road as they travel to the Dolphins (1/8), the first regular season finale in Miami since 2014 • In addition to Week 18, the Jets are on the road in Week 17 at the Seattle Seahawks, as the Jets close the regular season with consecutive road games for only the fourth time since the merger (1993, 1982 & 1970).

For clarity, flexible scheduling for Monday Night Football does not begin until the 2023 season.

In Week 15, three of the five matchups designated as “TBD” will be played on Saturday with the remainder to be played on Sunday. Specific dates, kickoff times, and networks for the designated Week 15 matchups will be determined and announced following the conclusion of Week 13.